I just though that you all would like to know that I've just got the OK to make THE FINAL SOLUTION FORENSIC CHALLENGE even easier for Roberto Muehlenkamp and lay claim to the $100,000.00 reward.

Please note that this waiver is for Treblinka and Roberto Muehlenkamp only.

For the purpose of helping RM meet THE FINAL SOLUTION FORENSIC CHALLENGE requirements, nafcash is waiving the following requirements for Treblinka:
Quote:
You must prove the grave’s exact location and its exact dimensions.

What this means is - the only thing RM has to prove exists at the alleged "pure extermination center" of Treblinka is the existence of the remains of 8,700 jews.

All other requirements remain in effect.

Now just how hard should this be?

The answer to the question "just how hard" it should be to prove that the site of the former Treblinka extermination camp contains the remains of at least 8,700 human beings is: well, that depends.

It depends on what Gerdes would accept as proof.

• eyewitness evidence, and
• documentary evidence, and/or
• physical evidence, which as concerns Treblinka is documented in crime site investigation reports, official reports about robbery digging and measures taken against robbery diggers and in the GPR scans of an unfortunate "Revisionist" who found exactly what he hoped not to find,

which add up to the inescapable conclusion that at least well over 700,000 people were murdered at Treblinka, that their bodies were mostly reduced to ashes and bone fragments and that these as well as other remains, which were (except maybe for some during cleanup of the mess made by robbery diggers when the Treblinka memorial was built in the early 1960s) not removed from the area, still lie in the ground of Treblinka – it is not too hard indeed to prove an amount of human remains far exceeding what is required to meet Gerdes’ requirement. The exhibits presented in my posts # 172, # 194 and # 777 on the VNN thread Archeological Investigations of Treblinka should be more than sufficient for this purpose. This scenario I shall call Alternative A.

If, on the other hand, Gerdes wants a physical quantification of human remains lying underground in the area of former Treblinka extermination camp and an expert's confirmation that the remains so quantified correspond to at least 8,700 human bodies, he’s demanding quite a lot, to say the least.

In my recent article Desperately yelping for the attention ... , I pointed out what it would require to meet similar demands regarding grave # 10 at Belzec, identified (along with 32 other mass graves) during Prof. Kola’s archaeological investigation in 1997-1999:

If, on the other hand, what Gerdes wants to see is a physical quantification of human remains contained in grave # 10 at Belzec and an expert's confirmation that the remains so quantified correspond to at least 6,000 human bodies, his requirements are at least very difficult to meet. For they would imply the following:

i) Excavating this mass grave (something that Prof. Kola did not do due to considerations of respect for the dead he had to comply with, see Part 1 of my Mattogno-Belzec article),
ii) Extracting the layers of "crematory remains mixed with charcoal" contained therein,
iii) Separating the crematory remains from the charcoal,
iv) Establishing the weight and volume of the crematory remains thus separated and
v) Having an expert provide an assessment of the number of human bodies to which these crematory remains correspond.

First of all, it is unlikely that anyone will obtain permission to excavate any of the Belzec mass graves, already because the area has been turned into an elaborate memorial.

Second, even if excavations were to be authorized, despite the disturbances of the memorial area they would presumably imply, long and arduous archaeological work would be required to remove the aforementioned layers of "crematory remains mixed with charcoal" from the mass grave.

Third, once the layers of "crematory remains mixed with charcoal" had been extracted from the grave, how would one separate the charcoal from the crematory remains in a manner that allows for accurately quantifying the latter? I strongly doubt that this is possible. But maybe Gerdes can tell us how he would do it.

Fourth, assuming that the crematory remains can be separated from the charcoal in a manner allowing for reliably quantifying the crematory remains, could an expert in matters of cremation accurately establish to how many human beings these remains belonged? One doesn’t have to be a cremation expert to realize that this is impossible, considering the variables involved, and that the most an expert can provide is an estimate based on assumptions that, however reasonable and realisitic they may be, cannot be empirically confirmed.

So if Gerdes were only to accept as proof an exact physical quantification in the sense described above, he would be asking for something that is very hard if not impossible to accomplish.

This, in turn, would make his "pledge" into yet another of Gerdes fraudulent publicity stunts, and the derisive howling in his CODOH post Tue Sep 02, 2008 12:02 pm:

a particularly instructive example of idiocy and dishonesty even by Gerdian standards.

The situation at Treblinka would be the same, except that at Belzec the mass graves have already been located and their dimensions and contents have already been assessed and described by an archaeologist. At Treblinka the first task would be to locate and outline at least one of the former extermination camp’s mass graves – a task probably more difficult to accomplish there than it was at Belzec, where a memorial was not yet in place when Prof. Kola’s study was conducted in 1997-1999.

So in this scenario, which I shall call Alternative B, Gerdes would be asking for something that is even harder to accomplish than a similar undertaking in regard to Belzec grave # 10 would be, if it can be accomplished at all.

This, in turn, would mean that the "waiver" he makes so much of is – as was to be expected – just another of Gerdes’ fraudulent publicity stunts, a rather transparent hoax meant to fool suckers.

Gerdes is requested to answer the following question, in a duly identified comment under the present blog article:

Let’s have a clear and simple answer please, Mr. Gerdes.

An evasive answer, especially if consisting of or including the good old "what part of the word proof do you not understand" – baloney, will be taken as meaning that Gerdes accepts proof as per the reasonable Alternative A.

And the absence of an answer, needless to say, will be taken as yet another and even stronger confirmation that, for all his bigmouthed howling, Greg Gerdes is just a little 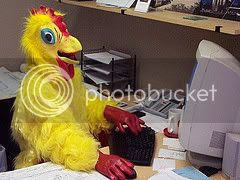