The Reichsführer-SS Heinrich Himmler's report to Adolf Hitler of 29 December 1942 that 363,211 Jews had been executed within three months in the area of Bialystok, the Reichskommissariat Ukraine and the Army Rear and Operation Area in the South is yet another show stopper for Holocaust denial. This series will review deniers' lame attempts to explain away this contemporary Nazi document.

Let's begin with the "Revisionist" who has published most, but who is arguably read the least.

Carlo Mattogno, The Einsatzgruppen in the Occupied Eastern territories, p. 242 - 251.


Mattogno's section "The Himmler Report of 29 December 1942" in his Einsatzgruppen book is a typical example of his protracting, pointless style in discussing inconvenient evidence. Nine pages of bizarre and false arithmetics as the acclaimed "specialist in text analysis" fails to grasp his secondary literature and skips over the most relevant primary sources.

Il dilettante does not get the difference between administrative districts of Ukraine, the Nazi's Reichkommissariat Ukraine and earlier historical regions. Stuff which is readily depicted on maps available in the Internet: oblasts of Ukraine, districts of Reichskommissariat Ukraine, regions Volhynia, Podolia and Polesie. Note that the Volhyn oblast is not identical to the Generalbezirk Wolhynien is not identical to the historical region Volhynia. Mattogno gets literally pushed around by Holocaust historians, when they switch from one regional definition to the other.

In Table 1, I have briefly summarized Mattogno's three failed attempts playing down the Jewish population/deaths of the Generalbezirk Wolhynien in 1942. In this region, the Nazi paramilitary forces killed most of the 363,211 Jewish victims mentioned in Himmler's report to Hitler.

He starts off with the historian Alexander Kruglov (quoting from Brandon, The Shoah in the Ukraine, p. 280), who provides a breakdown of the Jewish victims in the Ukrainian part of the Reichkommissariat Ukraine in 1942 according to oblasts. For "Volhynia" (means Volhyn oblast), he gives a Jewish death-toll of 101,000.

Then, all of sudden and for no apparent reason, Mattogno switches over from Kruglov's regional study to multi-regional works by Raul Hilberg and Yitzhak Arad. From Arad, he picks a figure of "20,000 [Jews] in Podolia" (just why not the corresponding region from Kruglov?) and from Hilberg he takes the remark on Himmler's report to Hitler that "there is little doubt that the large majority of these victims had lived in the Volhynian portion of the General District Volhynia-Podolia" (just why not Kruglov's remark that most scholars believe that "292,263 Jews killed before November 1 were almost exclusively from Reich Commissariat Ukraine"?)

Mattogno has now cherry picked all necessary ingredients for another one of his infamous epic fails: he adds Kruglov's figure of 101,000 Jewish deaths for Volhynia to Arad's figure of 20,000 Jews left in Podolia and triumphantly declares regarding Hilberg that the sum "certainly does not amount to “the large majority” of 363,211".

The argument does not make sense. Kruglov's figure refers to the Volhyn oblast. Arad's figure, on the other hand, was meant to be for the historical region Podolia within Generalbezirk Wolhynien. Adding both results in a hodgepodge of an oblast and some historical region.

Figure 1 shows the "target region" (Generalbezirk Wolhynien) in yellow and Mattogno's actual hits overlapping in blue. He pretty much missed most of it, including the whole of Polesie in the North.


Mattogno could have avoided his confusion of the Volhyn oblast with the historical region Volhynia by simply reading the book he was citing:

But the all-important question is: why did Mattogno even bother to quote Hilberg (who did not study the region in detail) and Arad (whose estimation for Podolia is far too low) when he had a full break-down of the Jewish death toll in 1942 in the Reichskommissariat Ukraine available from the foremost specialist on the Holocaust in Ukraine, Alexander Kruglov?

In Table 8.2 of "Jewish Losses in Ukraine" (see above) also quoted by Mattogno, Kruglov summarises that 362,700 Jews died in the Ukrainian part of Reichskommissariat Ukraine in 1942, thereof 246,000 in the Generalbezirk Wolhynien (without the Kremenets area and Polesie; for the latter Kruglov estimates 70,000 victims in footnote 12).

Mattogno complains that "Kruglov’s treatment of the victims in 1942 is rather superficial" and wants to see a "nebulous vagueness relating to the 363,211 presumed victims" (Mattogno, The Einsatzgruppen, p. 243). This ignores that Kruglov's article in the multi-author book is a condensed and summarizing version of his research published earlier. Again, by simply reading the article and its foonote, he could have avoided his misconception. 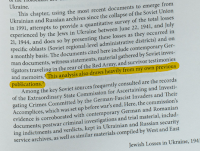 Besides, in 2016 (two years before Mattogno's English version of his Einsatzgruppen book), Kruglov and others published another detailed monograph on the Holocaust in the Ukraine providing details to each of the known killing sites in 1942.

The next in the queue of Holocaust historians, who Mattogno (in retrospective) begs to give him some well-placed kick into where the sun doesn't shine, is Shmuel Spector (The Holocaust of Volhynian Jews 1941-1944).

Here's how Mattogno prepares the scene for his next big fail:

First of all, Mattogno did not understand that Spector was writing about Polish Volhynia and excluded Soviet Volhynia in the South from his study. Figure 2 shows that Mattogno missed again substantial parts of the "target area" Generalbezirk Wolhynien:


Secondly, Spector's table is not a complete compilation of the Jewish population in Polish Volhynia in 1942, but only of selected settlements for which he found estimations "from memorial books of communities and various testimonies":

It is obvous already from the large gaps in the table that the data cannot be anywhere near complete: 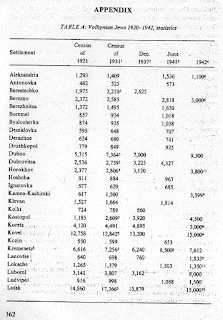 Did Mattogno seriously thought that towns like Dubno, Kovel, Lutsk, Vladimirezh, or Ostrov with large Jewish communities in 1937, lost their entire Jewish population by June 1941 just to get it back in 1942?

Just what did go through Mattogno's brain when he saw this table and painstakingly computed the sums? Not much that is for sure. A table full of gaps based on "memorial books of communities and various testimonies"? Sources he else rejects straightaway if affirmative on the Holocaust? No problem for him if it just serves his agenda.

On top of that, he also erroneously subtracted the 40,000 Jews mentioned in the Einsatzgruppen report, although the figure has to refer to the year 1941, because no such large scale actions are known from January - April 1942.

Mattogno also conveniently sweeps over the fact that Spector arrived to a death toll for Polish Volhynia of 150,000 for the period August - October 1942: 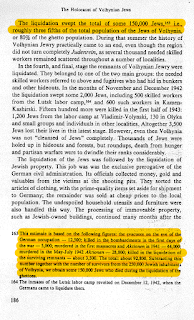 The third one is on Yitzhak Arad, The Holocaust in the Soviet Union.

Mattogno claims that "Arad diligently lists all the executions, real and presumed, which are said to have taken place in Volhynia in 1942" and calculates a total of 134,700 victims.

Uhm, no. Arad did not "diligently list all the executions" in the Generalbezirk Wolhynien, but only the largest individual actions. He did not provide figures on the majority of killing actions which were carried out by the Nazi paramilitary forces in the area, see Kruglov et al., Kholokost v Ukraine, vol. 1&2 for a comprehensive representation of the known killing actions.