The Ugly Voice, that is. Only a primitive creature could provide us with such pearls of wisdom as:

Joredog: The fact that your grandmother survived is proof that it wasn't a death camp.

You know you won't get deleted there.

(A forum where anti-"revisionist" postings are routinely censored and deleted, and where most effective anti-deniers are banned? "You won't get deleted there"? Devious liar or... a primitive creature.)

One of the first victims was Richard Baer, successor to Höss and last commandant of Auschwitz, who was arrested on December 20, 1960, near Hamburg, where he was working as a lumberjack. He was imprisoned and interrogated in prison and insisted that the Auschwitz gas chambers were a myth. Unfortunately, he did not live to take this position in court, because he died in prison on June 17, 1963, at the age of 51 apparently from a circulatory ailment, although his wife considered his death rather mysterious.

And this is kind of how it works: Baer had a lawyer, Baer was interrogated, but he said Auschwitz was a myth. Where are the interrogation transcripts? Where are any of his statements. There's nothing. I've never heard of anyone having any piece of writing from Baer whatsoever, yet he was in jail for 3 years. Maybe in the sources Butz references there's "something."

(That's how denial works - one troglodyte quotes another troglodyte, taking it all on pure faith. No matter that Baer was Auschwitz I commandant in 1944, when, indeed, there was no gas chamber in that camp. No matter that his pre-trial interrogations are publicly available (e.g., on Frankfurt Trial DVD). No matter that Baer never denied the existence of gas chambers in Auschwitz complex, but rather correctly stated that he, as a commandant of the main camp in 1944, had nothing to do with gassings, because gassings were performed in Birkenau (22.12.1960):

Forget all that. Better let's dream up the story about a brave commandant who was murdered for refusing to repeat the myths. This is much more fun for us, troglodytes!)

Richard Baer. Commandant at Auschwitz spoke out. Three years in jail denying it happened until his mysterious death right before the Auschwitz trial. In all my research, I've never seen a piece of his writing.

(Which just goes on to show how much troglodytes' "research" is worth. They can't even google.)
And finally:

The reason the models look different is because everyone is lying and they can't get their story straight.

Simplistic thinking of a small, primitive mind. When such thinking is elevated to the level of dogma, we get the distortion of reality like that, which Ugly Voice produces in his clip no. 29 [YouTube version] which will be examined in more detail later. For now let me point out that the Ugly Voice deceptively accuses Alexander Donat of fabrication. He compares the 1944 English edition of Wiernik's testimony to the version published by Donat, and finds that they look different:

[English 1944:] It turned out that we were building ten additional gas-chambers, more spacious than the old ones with a capacity of about 150 square feet. As many as 1,000 to 1,200 persons could be crowded into one gas-chamber.

[Donat:] It turned out that we were building ten additional gas chambers, more spacious than the old ones, 7 by 7 meters or about 50 square meters. As many as 1,000 to 1,200 persons could be crowded into one gas chamber.

So Donat is taking the liberty to more than triple the square feet of the chamber.

And how would a true skeptic reason? First of all, which version should a priori be closer to the original? The one that uses meters, not feet, of course. Could the publisher of the English edition have gotten something wrong, and published the wrong calculation? And how can we check that? Of course, checking the Polish original is the best solution, and we're working on that. Meanwhile, there are workarounds.
Let's look at Mattogno and Graf's Treblinka book, to which the Ugly Voice refers repeatedly. Mattogno quotes document USSR-344, which is dated December 29, 1945:

Witness Wiernik, who was employed as a master carpenter during all of his stay at the camp and had relative freedom of movement, gives the following dimensions of the chamber: in the small building 5 × 5 m, in the large 7 × 7 m.

Soooo... perhaps Wiernik was claiming 7x7 meters all along? Andrew supplied me with the Yiddish 1944 edition of Wiernik's memoir, so I also looked that up there. Not knowing Yiddish, Arabic numerals were my clues. And voila, on page 24:

It wouldn't be that difficult for the Ugly Voice to check this information and not to make a filthy, libellous accusation against Alexander Donat. But then again, that's the difference between a mind of a critical thinker and a mind of a troglodyte. 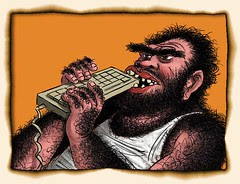