During the post-war polish investigations into Chelmno extermination camp, a recurring theme was that in summer 1942 a fake Gestapo commission, supposedly British intelligence, entered the grounds of the camp (see Montague, Chełmno and the Holocaust, p. 89)

On its Facebook account, the Chelmno Museum recently published an interesting German document confirming the infiltration of the extermination camp (thanks to Patrick Montague for calling this to my attention): 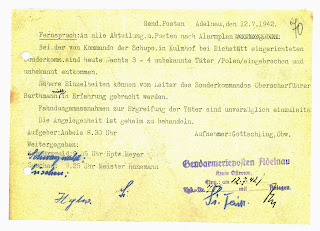 Message: To all units and outposts according to the alarm plan

At the Sonderkommando set up by the detail of the Schupo in Kulmhof Eichstätt 3 - 4 unknown perpetrators / Poles / broke in last night and escaped unknown. Oberscharführer Barthmann [sic!], head of the Sonderkommando, cannot provide any further details....The matter is to be treated secretly.

This message on the hunt suggests that the men broke into at night. On the other side, according to the post-war testimonies, fake Gestapo men entered at least the kitchen of the Sonderkommando, made contact with the commandant's deputy Albert Plate and even refuelled their car. It is unclear how deep they penetrated into the camp facilities.

In any case, the day of the action was well choosen. It happened during the Summer break of the extermination camp; on a Saturday, with likely many members of the Sonderkommando off and away. Security of the camp was low. The camp commandant Hans Bothmann was apparently not on-site either.

So far there is also no indication that any information obtained by the infiltrators was used by the Polish resistance or foreign intelligence.