Grover Furr is a neo-Stalinist falsifier of history well-known for his stunning incompetence, ideological myopia and fanaticism ("I have yet to find one crime that Stalin committed").

On 15.08.2022 he published an article accusing me of a "lie" on the issue of the police identification tags (he calls them badges, which is OK, but since we're not talking about the badges worn on the uniform, I will call them tags) found at Volodymyr-Volynskyi (a detailed explanation of the issue is here) in my 15.12.2021 article (about a Katyn denial propaganda film on the Russian NTV channel) in the Nobel-prize-winning Novaya gazeta (here in Russian; I will refer to it as "the NG article").

Ironically, Furr focuses only on this one claim, even though the bulk of the argumentation in his pseudoscholarly Katyn denial book The Mystery of the Katyn Massacre: The Evidence, the Solution has been debunked by me here, here and here (as well as all over the Katyn Files website; though mostly as arguments of other people; there's precious little original content in Furr's propaganda pamphlet).

Here's the claim he objects to:

No: The badges were not found on the bodies. One was found a few meters from the grave ditch, the other in a layer of household garbage above it.

He then attempts to find some fault or other with Guryanov's claims. The problem for Furr is that no, my claim about the location of the finds in my NG article was not based on Guryanov (unlike my earlier blog post). And Furr had to know this for two reasons.

First of all, I mentioned the exact sources for my claim in my big "Katyn and anti-Katyn..." article published on my Katyn website on 10.03.2021. My website is well-known to Furr and he relies on some materials from it in his book. The site is also mentioned in the NG article. The "Katyn and anti-Katyn..." article was the first published (in a real book, yes) systematic debunking of Katyn denial, also mentioning Furr, so how credible it is that it escaped Furr's attention?

Second, the NG article announced a full-scale rebuttal of the NTV propaganda film:

One propagandist can ask so many rhetorical questions that the answers would not fit on a newspaper page, so a detailed breakdown with all the references will be published on the "Katyn Files" website, here we will consider the main points.

And indeed, it appeared on the website on 18.01.2022. And once again, this rebuttal provides a full quote from the aforementioned "Katyn and anti-Katyn..." article on the matter of the tags, including the full sources I used. Time to quote it in full:

The publications of the deniers, however, omit a key fact: the tags were not found on the bodies. Kuligowski's tag was found a few meters from the grave ditch [1], Małowiejski's tag was found in an heaped layer above the grave ditch, among the household rubbish [2]. Thus, from the finding of the tags in Volodymyr-Volynskyi it did not follow at all that Kuligowski and Małowiejski were buried there too. Given the sum of all the facts, the simplest explanation is the following: probably Małowiejski and Kuligowski, after having been captured in 1939, were initially held in a prison in Volodymyr-Volynsky, where their police tags (not to be confused with the "nieśmiertelniki" tokens to identify the dead) were taken away and for some reason not returned later, these tags were later found in the prison by the Germans and thrown together with other things near the grave ditch as they were not needed. This hypothesis was confirmed by the historian A. E. Guryanov, who discovered Małowiejski's card in the prisoner-of-war files of the RGVA. It says that he was taken prisoner of war on 19.09.1939 in Volodymyr-Volynskiy, from where he was sent to the NKVD reception center for prisoners of war in Shepetivka only 25 days later [3]. Although Kuligowski's card has not yet been found, there is no reason to believe that the fate of his tag was different, given that it was not found on the body.

Thus, there is no reason to believe that Kuligowski and Małowiejski are not buried in Mednoye. This example clearly shows how the conclusions of the deniers do not correspond to the information they actually have.

1 Zlatogorsky O., Panishko S. Investigations on the Volodymyr-Volynsk hill fort in 2010-2012: Sources and Materials. Lutsk, 2013. P. 41 (a tag was found in the square A-10 of the excavation zone I), p. 47 (the square is outside the grave ditch). The Ukrainian authors mistakenly suggested that the tag belonged to one of the buried, but unlike the archaeological facts we should not accept their wrong guess.

There you go. None of the tags was found on a body. And Furr had to know what my sources for my claim were.

He accuses Guryanov (and, by extension, me — though it doesn't really work like that, and Furr knows it) of lying by citing two Polish texts. For Kuligowski he cites a report by Dr. Siemińska et al., which, however, doesn't support his contention in the slightest.

For Kuligowski's tag to have been found during the exploration of an excavation area that included the burial pit doesn't mean it was found in the pit itself, because the exploration of the excavation site naturally also included exploring the areas right next to the pit. And indeed, in the detailed article by the Ukrainian team we see that this was exactly the case: the tag was found outside the grave.

Here's an excerpt from the page 41 from the Ukrainian report:

Here's an excerpt from the page 47: 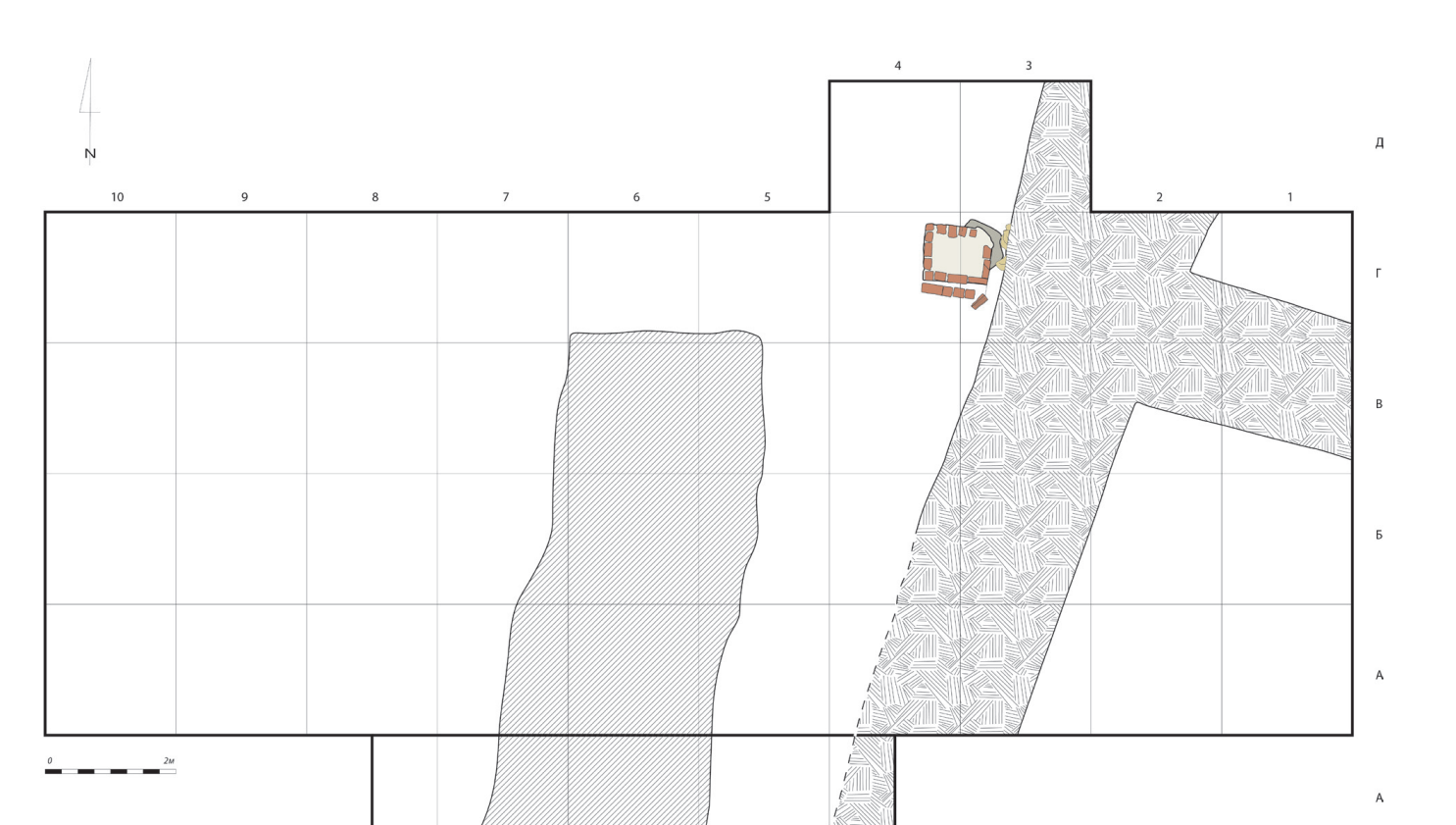 The irregularly rectangular pit in the middle is the grave. Each square is 2 m in length and height. The square A-10 where the tag was found is thus at least 5 m away from the edge of the grave and the tag itself was anywhere from 5 to 7 m away. And you can clearly see that the excavation area was much larger than the mere burial pit itself.

For Małowiejski Furr stoops to cite not any academic study, but a short media report, in which a clueless journalist simply conflated a) recovery of some remains coupled with b) identification of a policeman as c) recovery of this policeman's corpse. Such conflations are only to be expected in the media.

Obviously, an academic description beats an offhand news item. And this description comes from the very Dr. Siemińska on whom Furr relies for Kuligowski!

In the source I cited we read:

Graves no. 1 and no. 2, exhumed in 2011–2012, were both 3 m wide trenches located side by side. Grave no. 1 was 21.5 m long and Grave no. 2 was 10 m, both situated in Trench I. Grave no. 1 was covered with rubbish, in which the researchers found, among other things, a screw top and an identification tag of Polish State Police no. 1099, which belonged to senior constable Ludwik Małowiejski.

That's it. Case closed once again. Both tags were not found on bodies.

So, as we see, the deceptive ideological hack Grover Furr has failed once again. His methodology is no different than that of the Holocaust deniers.