"Forensic evidence" is lacking for the vast majority of people killed during World War Two. Yet, it is not that we do not know what happened during this time: combat deaths, war deaths, bombing deaths, ethnic cleansing, genocide, pogroms etc. Historians have access to a wide range of types of sources to reconstruct the events. Holocaust deniers do not raise their hands that they have issues with this - like when it concerns German casualties. But on the extermination of the European Jews, deniers are suddenly keen to make up new standards to deny the reality of the fate of the Jews. It is a symptom of desperation that they cannot cope with the evidence on Nazi atrocities with "fair play" according to what is reasonable and accepted on other historical events.

Santiago Alvarez, too, thought to make up new rules. He claims that "finding the murder weapon and at least traces of the victim are key issues" and "a pivotal point for any independent scientific investigation" (p.17). Finding the murder weapon and the victim are not even pivotal for a criminal investigation of murder, let aside for historical research on state-sponsored mass violence during a bloody world war decades ago. As if killings - howsoever well-evidenced - could not be established if the murder weapon and corpse are not available. The only "pivotal" point is whether shortage of "material evidence" is explainable within the context.


Alvarez asserts that one would "have to expect that one or several of these vehicles were captured by the Soviets during their counter-offensives" (p.18). The homicidal gas vans were part of the Geheime Reichssache (Secret State Affair) - the highest level of secrecy - assigned to the Nazis mass murder programs (see Becker letter and Just memo, also on Kulmhof and generally on the extermination of the Jews What's There to Hide? Camouflage and Secrecy of Nazi Extermination Sites).

As such, they were under no circumstances to fall into the enemy's hand. Things had to go terribly wrong, like that a vehicle was overlooked in confusion or was overrun by a sudden enemy attack. But it is prima facie not expected that the killing vehicles would have been left behind as they were. Instead it is reasonable to consider that they were destroyed or dismantled and fitted for non-homicidal use. Upon a sudden Soviet advance, they were among the first items to evacuate. Given that the Soviets did not capture entire Einsatzgruppen commandos upon their counter-attacks - at most, they got Soviet collaborators or German individuals - it is improbable that they could have gotten their hands on a gas van.

Indeed, how thoroughgoing the Nazis dealt with this matter is documented for the Soviet’s Operation Saturn in early 1943, which forced a sudden retreat of Einsatzgruppe D from the Caucaus region. A radio message sent by the head of the unit, Walther Bierkamp, to the RSHA of 18 February 1943 informed that one "g[as]-van" arrived at the unit's HQ in Melitopol, while another one was "blown up and burnt on march" (BSTU, ZR 920, A.51, p.60f.). Thus, when the German paramilitary forces could not evacuate the "death vans", they made sure that the Soviets did not get an intact vehicle, which could be identified as gas van. The incident was already described in Andrej Angrick's study of Einsatzgruppe D "Besatzungspolitik und Massenmord (2003), p. 673-674. Just why does Alvarez know nothing about it...?

Along the same lines, he displays little knowledge on the subject of body disposal in the East, which included that of the gas van victims. The corresponding "Aktion 1005" overseen by Paul Blobel is only mentioned on p. 23 on Serbia, but not regarding its more significant activity in the occupied Soviet Union. Open air cremations in the occupied Soviet Union are only briefly referred to on a trial verdict (p. 179). A monograph on this action by Jens Hoffmann, "Das kann man nicht erzählen..." (2008) published 5 years earlier remains unmentioned.

It is really a reflection of the poverty of his research that he did not bother to check the literature on the units that were employing the gas vans and clearing the corpses.

So the Soviet forces did not capture any gas vans during their taking of the Caucasus in early 1943, as these were either evacuated to Melitopol or blown up (see above). However, what the Nazis could not get rid off were the mass graves in Krasnodar. Soviet investigators exhumed the sites and forensically examined the corpses. According to the proceedings of the Krasnodar trial (14 to 17 July 1943), carbon monoxide poisoning was determined as the cause of death for 523 of 623 exhumed victims (The people's verdict. A full report of the proceedings at the Krasnodar and Kharkov German atrocity trials, p. 13). 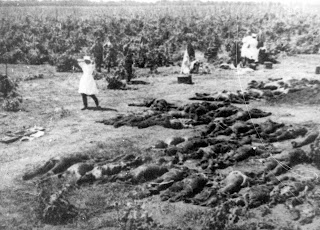 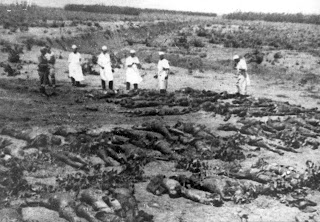 Here you go, "forensic findings" supporting the use of homicidal gas vans in Krasnodar. Don't believe in Soviet investigations? Then one cannot at the same time demand forensic evidence for gas van victims of the Einsatzgruppen as those were operating in the occupied Soviet Union. If one's point of view always prevents a specific type of evidence to be credible, even if the matter is real, then one cannot insist on its relevance, but has to focus on other evidence (say, contemporary documents or testimonies).

Alvarez argues that the Soviet examination is "very fishy" because "finding carbon monoxide in severely decomposed corpses is impossible with modern spectroscopic methods". Welcome to the perverted logic of denial. Show me gassed corpses and if shown, claim that gassing cannot be shown.

For the record: the cold conditions in Winter 1942/43 preserved to some extent the corpses buried in Krasnodar. It is consistent with forensic literature that the Soviet forensic scientists could have determined exogenous levels of carbon monoxide under these conditions (A. Klöppel and G.Weiler, Fäulnisbedingte Konzentrationsänderungen und zeitliche Nachweisbarkeit von Kohlenmonoxid in Leichenblutproben, Z. Rechtsmed. (1986) 97, 105-109; F. Wiethold, Zum Spätnachweis von Kohlenoxyd bei exhumierten Leichen, Deutsche Zeitschrift für die gesamte Gerichtliche Medizin, 1930, 14, 135–138).

The Soviet finding is further plausible in the light of the fact that members of the German paramilitary forces testified towards West-German investigators on the presence and use of a gas van in Krasnodar, e.g.