This starts an irregular (i.e.: whenever I feel like it) series in which I will be briefly commenting on the especially primitive specimens of the denier fauna.

Now, to be honest, even the crème de la crème of the denier kingdom, the "academic" deniers, are not really far away from the lower branches of the rotten tree in that they will more often than not mangle the sources, proffer trivial and laughable "arguments" and fall victim to the most common logical fallacies. But at the very least they are able to put up a facade of sophistication on their anti-knowledge project, what with their archival references and the sometime use of scientific jargon. Which looks more like posh lipstick on a chihuahua, but hey.

So this series won't be concerned with them, but rather with the lower-tier negationists who more or less fully ignore the "research" of their slightly less devolved colleagues, instead subsisting on whatever radioactive slime and long-ago-expired fast-food-for-thought leftovers they randomly find while aimlessly crawling through the Great Internet Wastes.

The first specimen under review is the neo-Nazi cartoonist Stonetoss.

As is usual for the types with deficient intellectual skills, he's a Holocaust denier, as can be seen from this comic: 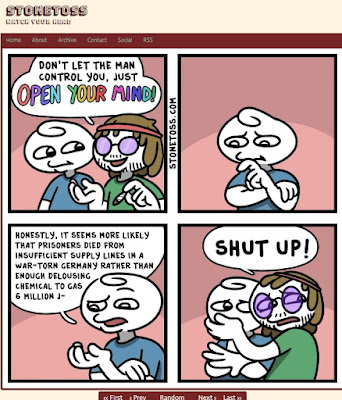 Treblinka, Belzec, Sobibor, Kulmhof were not concentration camps (they were very small patches of land in the occupied Poland with place only sufficient for a few hundred/thousand Jews who were forced to drag/burn the corpses). The disappearance of about 1,4 million Jews deported to these 4 camps in 1942 alone thus obviously cannot be ascribed to "supply lines".

In Auschwitz the selections took place upon arrival, in which most Jews unable to work were selected for the gas chambers, thus again the majority of the victims were not camp inmates.

The victims of the mass shootings and gassings by the Einsatzgruppen and other mobile units were mostly not any camp inmates either.

And most of the deaths happened long before any "supply lines" could break down, and most - outside of Germany.

Finally, neither does anyone credible claim that 6 million Jews were gassed.

All of that is basic knowledge.

But hey, who needs knowledge if you've grown a couple of pedipalps to draw silly pics with, right?

Next comes Stonetoss' anonymous admirer, who changed his 9/11 Truther cartoon (sigh) into a denial cartoon:

This modification, however, is so dumb that it could have been created by Stonetoss himself.

Too bad that the modern civil cremation not only doesn't necessarily take that long, it is in no way comparable to the cremation methods employed in the Auschwitz crematoria (and the end result mostly depends on the methods employed, not on whether the oven is modern or not). I explained it here in detail.

When you remember that the "academic" denier Mattogno concedes 1 hour per corpse cremation rate, and even faster ones in certain cases, you will see why this was worth an inclusion here. The neo-Nazi organism is doubly laughably wrong.

Finally, neither does anyone credible claim that 6 million Jews were burned in crematoria ovens.

That, once again, is basic knowledge.

Our last specimen for today is the alleged libertarian with some strong neo-Nazi views, Ron Unz (further: Uncle Nutjob). Andrew has called our attention to his recent outburst (posted under an article by another cave-dweller, debunked here).

Uncle Nutjob begins with repeating the mind-numbingly dull internet meme about the memoirs of Churchill, Eisenhower and de Gaulle: 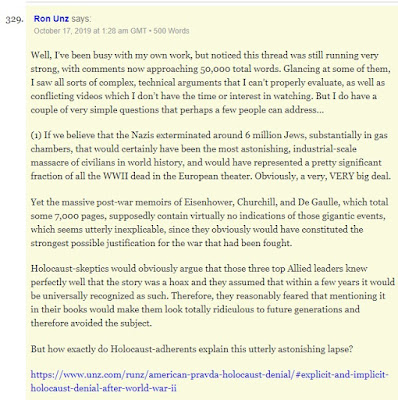 Too bad for him that I not only fully debunked this meme here, I also explicitly linked to the debunking in this previous destruction of Uncle Nutjob's posterior orifice, to which he, notably, had no response whatsoever.

But it gets worse, in the next part he literally puts up an argument that since two radically crazy Jew-hating pro-Nazis denied the Holocaust, then it must be a hoax! 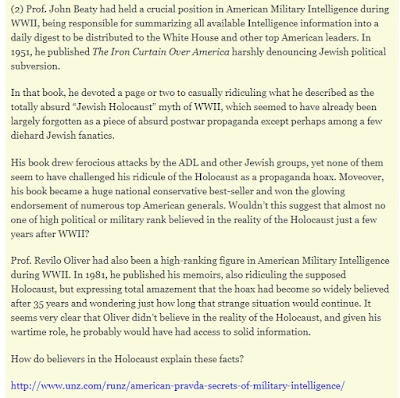 I mean, a Jew-hater who ranted about "our alien-dominated government" that "fought the war for the annihilation of Germany, the historic bulwark of Christian Europe" would have never dismissed military intelligence about the Holocaust as lies, amirite?!

Can they degenerate even further? We will see in the next installment. 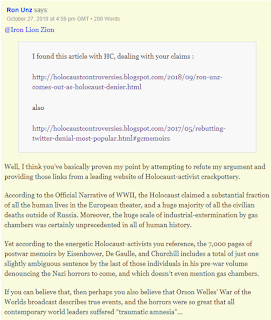 Note how Uncle Nutjob fails to deal with the substance of the post, simply reiterating his low-brow meme, which was debunked in the very article he is quacking at. 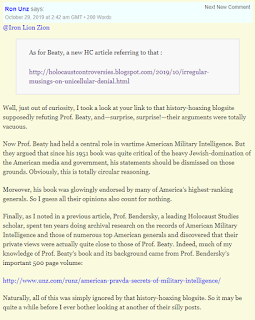 Translation: "Waaah! Waaah! That my idol was a Jew-hating, pro-Nazi nutjob doesn't matter at all in the evaluation of his views on the Holocaust! HC has cooties! Waaah!"
Posted by Sergey Romanov at Sunday, October 27, 2019