Mattogno, his Einsatzgruppen book and the Gas Vans. Part II: Mental Degeneration or Dishonesty, Your Choice!

In this post, I report on the case that Mattogno's Einsatzgruppen book (English edition) omits in the gas van chapter crucial evidence on the authenticity of a source - evidence which he had cited two years earlier in the Italian edition of the very same book. The incident is a sign that there is something seriously wrong with him. It's to hope for him that he is still mentally fit. But if he is, the following will inevitably raise doubts about his credibility as a book author.

The forgery allegation is of most interest here. On the testimony of the Higher SS and Police Leader for Central Russia Erich von dem Bach-Zelewski published on 23 August 1946 by the German-Jewish newspaper Aufbau, Mattogno writes that "the Jewish editors of Aufbau falsified the original document, shamelessly interpolating and adding entire paragraphs" (Mattogno, The Einsatzgruppen in the Occupied Eastern Territories, 2018, p. 288). The section is an expansion of a paragraph from Inside the Gas Chambers, where he concluded that the content of the Aufbau article "had been massively manipulated by the editorial staff of the newspaper".

I had refuted the claim in January 2017 on this blog (On Mattogno's Hallucination That von dem Bach-Zelewski's Extended Testimony on the Minsk Shooting Is a Jewish Forgery).

So far, business as usual: Mattogno made a claim in his Einsatzgruppen book, which had been debunked here before. At this point, one can "only" accuse him of a) writing nonsensical texts and b) not monitoring our blog.

The really disturbing part is found in the Italian edition of the Einsatzgruppen book published two years earlier. On p. 275 he cited precisely the English translation of von dem Bach-Zelewski's declaration from Yad Vashem Archives, O.18/90, which he found independently of me and that also contains the passage published in Aufbau. Therefore, by October 2016, Mattogno knew very well that his hypothesis that von dem Bach-Zewelski's testimony in Aufbau "had been massively manipulated by the editorial staff of the newspaper" was false. Indeed, he no longer argued that the newspaper had faked the testimony.

In the now published English translation of his Einsatzgruppen book he performs another turn and claims the forgery again. In theory, it is certainly possible to change one's mind back and forth, if there is a change of evidence or its interpretation. But there is no fresh evidence, he does not invalidate previous evidence and he does not provide a new interpretation. Mattogno simply omits von dem Bach-Zelewski's declaration from the Yad Vashem Archives he had previously cited in the Italian edition and argues as if it never existed (Figure 1).

(this incident is similar to his back and forth on the reason why the Auschwitz death certificates had been falsified, though this time the consequence of omitting a source refuting himself appears to be much more serious)

I am at a loss for words and cannot explain this as a simple human error.

Perhaps we are also dealing here with a grave mistake combined with a proof-reading misconduct? One could speculate that Mattogno had submitted an out-dated Italian manuscript to the Holocaust Handbooks editor - written before he found the declaration of von dem Bach-Zewelski, a manuscript which was then revised for the Italian publication. In addition, he did not proof-read the submitted Italian manuscript and he did not proof-read its English translation or he is no longer capable of proofreading his own work. It is notable that the difference is not just a word or two, but there are several paragraphs affected and it's a central argument, so it is nothing which can be easily missed upon reading (Figure 2).

(by the way, the curious typo "a visita di Hitler a Minsk" on p.275 of the Italian edition was corrected to "Himmler’s visit to Minsk" on p. 288 in the English edition, so there was apparently some proof-reading by somebody) 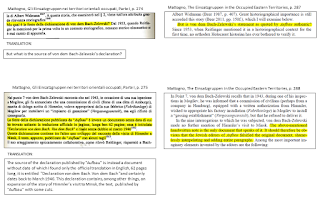 The hypothesis that Mattogno submitted an outdated manuscript would also explain the strange disappearance of a paragraph on SS-Untersturmführer "completely unknown to somebody not performing any research" Ernst. It might have been a late addition to the Italian edition and was lacking in the older manuscript used for the English translation.

Perhaps it is also true that the presumed mistake with the manuscript was realized at the stage of proof-reading, but the publishing was pushed through anyway?

I can only speculate how to explain these observations. Mattogno and his editor know what happened. They are urged to clear up what went so seriously wrong and why.

In any case, the matter reflects once again discredit on Mattogno's method to justify his Holocaust denial. When he argued in Inside the Gas Chambers in 2014 that von dem Bach-Zewelski's testimony "had been massively manipulated by the editorial staff of the newspaper", he was miles away from demonstrating the point. It was based on the lack of archival citation in the literature, a flimsy argument for somebody who has not searched through any potentially relevant files for this (which is not substituted by Hilberg not citing a file with the testimony) and the existence of a more brief deposition of von dem Bach-Zelewski. His argument was opposed by the fact that the testimony did not correspond to how pro-Jewish, anti-Nazi people would prefer it. Simply put, his theory did not make much sense and it is very strange how an alleged specialist in text analysis did not recognize this (see also here again).

So Mattogno had very little in his hand, yet accused with certainty that the Aufbau editors had committed the misconduct of forging von dem Bach-Zelewski's account. That's a huge mismatch between the strength of evidence and that of the conclusion. It did not come as a real surprise that one day the forgery allegation would be refuted by finding the account of von dem Bach-Zelewski in some Nuremberg related file; it was only surprising that this day came so soon.

This is not an isolated, unfortunate case, but rather the rule in Mattogno's writing on the gas vans. His conclusions and allegations are barely supported by sufficient evidence. Just with "the Jewish editors of Aufbau falsified the original document", claims such as that "all Saurer trucks had diesel engines" or "Pradel was not a 'Major' in any way" or gas van "in the sense of 'mobile homicidal gas chamber', was coined only after the end of the Second World War" etc. pp. were never based on any proof or multiple pieces of corroborating evidence, but guesswork, hand waving, wishful thinking. His flimsy arguments lack any robustness and fall apart too easily upon encountering any piece of counter evidence. It is only a logical consequence of this that it frequently turns out that the opposite of his claim holds.

Mattogno's almost infinitely low standard of evidence on anything in some way supporting his questioning of the Holocaust introduces a heavy bias towards Holocaust denial, which is further multiplied by his almost infinitely high standard of evidence on mass murder of Jews. The resulting gross double standard guarantees he will always arrive to the conclusion that the Holocaust did not take place, whatever evidence exists. This makes him a reliable Holocaust denier, but an incompetent researcher on the fate of the European Jews during World War 2.

Finally, when Mattogno changed his view in his Italian Einsatzgruppen book on the Aufbau issue, he did not bother to correct his contrary representation in Inside the Gas Chambers. No footnote about his serious accusation towards the Aufbau (one could even argue that an apology were adequate in this case). He silently dropped the issue (just as with the Diesel argument). Indeed, it were pretty inconvenient for him to explain his too easy play of the forgery card, which is vital for his Holocaust denial.


I would like to enquire why in section 6.2. "Erich von dem Bach-Zelewski and Himmler’s Visit to Minsk: Historiographical Interpretations" of the present book the author seems to have "forgotten"  that in the Italian edition he had found evidence which shows the testimony of von dem Bach-Zelweski published in Aufbau had not been manipulated and faked by newspaper, see

The site informs me "Thank you for your comment. It is now awaiting moderation. This may take up to a week at most."
Posted by Hans Metzner at Saturday, December 22, 2018