The mass execution was also reported by numerous other witnesses. From a historiographic point of view, what is most significant in von dem Bach-Zelewski's account is that he described how after the shooting and visiting of a mental asylum in Minsk (which are both confirmed by Himmler's appointment diary) Himmler ordered the Einsatzgruppen B leader Arthur Nebe "to make use of a more human method of killing" on the mentally ill people, which links the incident to the subsequent mass killing trials with explosives and poison gas in asylums in Minsk and Mogilev. The connection between the events is supported by von dem Bach-Zelewski's own documented activity on the next day to get a demonstration of the mobile carbon monoxide gas chamber of Sonderkommando Lange (for obvious reasons, he kept quiet about this in his post-war testimony).

A more vivid and detailed description of the Minsk shooting by von dem Bach-Zelewski was published on 23 August 1946 in the German-Jewish newspaper Aufbau (Figure 2). The account is somewhat more general with respect to the scope of Himmler's order following the mass execution and asylum visit. He considered that "shooting is not the most human method", ordered Nebe "to think about it and submit a report based on the experiences made" and agreed to try explosives on mentally ill people in Minsk.


But if it were according to the Holocaust denier Carlo Mattogno, von dem Bach-Zelewski's account in Aufbau is a forgery based on his more brief statement from the NARA Record Group 238:


"This anecdote appeared on 23 August 1946 in the New York Jewish newspaper Der [sic!] Aufbau as part of a statement attributed to von dem Bach-Zelewski, but its contents had been massively manipulated by the editorial staff of the newspaper, as is apparent from a comparison with the original statement of this SS officer."

Unfortunately for Mattogno, this is rubbish. Upon systematically searching the Yad Vashem Archives digital collection of Yitzhak Stone, who "was a senior aid to the American prosecutor in the Nazi War Crimes Trials at Nuremberg" for interesting material for the blog (and there sure is, so stay tuned), I stumbled across the English translation of an undated, 60 pages long "declaration von dem Bach" (YVA, O.18/90, p. 20ff.). The declaration contains amongst other things also the passages reproduced in German in Aufbau (Figure 3). 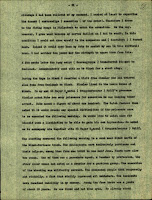 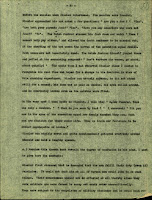 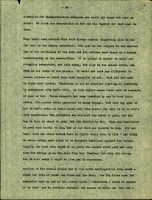 It is therefore apparent that the account was "not massively manipulated by the editorial staff of the newspaper", but is indeed a more detailed declaration given by von dem Bach-Zelewski to the Nuremberg prosecutors, which was obtained by the Aufbau staff.

In all fairness, people do mistakes, so that's not the point. The issue is rather what the blunder tells us about Mattogno's flawed method and reasoning. He claimed the Aufbau account a forgery merely because the lack of an archival reference and because it contains an extended description compared to another declaration from von dem Bach-Zelewski. While the unclear provenance of the account allowed for the possibility that the Aufbau editorial staff might have fabricated it by embellishing the short declaration, it is far from indicating let aside establishing anything such.

In fact, already some basic text analysis suggests that it is implausible that the pro-Jewish, anti-Nazi editorial staff of Aufbau would have created a text according to which the victims were "without exception partisans and their helpers" and were executed in a "military correct" manner, that Himmler intervened "not to torture the women" or that the SS leaders cared to find the "most human method" to kill their victims, just to mention some examples. Given that the text was clearly written from a Nazi point of view, common sense would have demanded - also in the case of uncertain provenance - some pretty good evidence to demonstrate the otherwise unlikely claim of a Jewish forgery.

By the way, another example for Mattogno's poor skills in spotting fake sources has been previously pointed out in Rebuttal of Mattogno on Auschwitz, Part 5: Construction Documents, E: Gas Detectors. He maintained that a formally perfect authentic German document lacking any serious and comprehensible motive for a forgery was "produced by an amateurish forger" merely because it turned out as too difficult to interpret within his narrow mindset.
Posted by Hans Metzner at Monday, January 16, 2017