Mattogno's Distortion of Orders in his Italian Einsatzgruppen Book

An English translation of Carlo Mattogno's Einsatzgruppen study, which had previously appeared in Italian in two parts (1 and 2) has just been translated and is undergoing "author proofing" before being made available as Holocaust Handbook No. 39. However, towards the end of October 2018, Germar Rudolf wrote that "We have submitted a long list of open issues -- including remarks made by the HC Blog -- to the author for his review, and are awaiting his feedback" [see screenshot at the foot of this article]. What are these issues? Many of them are likely to pertain to Roberto's detailed refutation of the Jaeger Report chapter. Some may also relate to Hans' demolition of Mattogno on gas vans. This posting focuses on the Italian text's distortions of German orders, which Mattogno misrepresents because he wishes to convince his readers that the orders were intended to shoot Jews not "as Jews" but because they were assumed by the Germans to be aiding Bolshevism and the partisans (pp.10-11). Given that I have posted previously on Mattogno and Graf's old habits on this theme, it is possible that Rudolf wants Mattogno to address it. The distortions regarding orders can be shown by presenting them in chronological sequence.

Hitler's goals for the campaign against the USSR had been conveyed in his meeting with Wehrmacht leaders on March 30th, 1941, which I analyzed here. Mattogno alludes to this meeting in his Italian text but only indirectly through a quotation from the secondary literature (p.17) and he only cites this passage in order to argue that the Germans only shot Soviet Jews, not Polish ones, repeating an argument that was made earlier by Graf in Treblinka here. However, several early reports show Polish Jews being targeted; for example, a report from Einsatzgruppe B dated July 2nd cites Heydrich's Einsatzbefehl No. 2 as stating that self-cleansing actions (pogroms incited with German support) in Polish areas should target "Bolsheviks and Jews", not "Bolshevik Jews." An introductory note stated that this was recommended for Einsatzgruppe B's area of operation by "17th Army Command", namely Stülpnagel.[1] Moreover, this was not the first order to separate "Bolsheviks and Jews" in this way. Only three days after Hitler's March 30th briefing to the Wehrmacht, an agreement between Heydrich and Wagner was published in the guidelines to the troops in the Balkan states stating that "Communists and Jews" were to be among groups that were targeted by the Security Police there.[2] This was followed on May 19 by the Guidelines for the Conduct of the Troops in Russia, which mandated "ruthless and vigorous measures against Bolshevik inciters, guerrillas, saboteurs, Jews and the complete elimination of all active and passive resistance."[3] This order is quoted by Jürgen Förster in an article Mattogno cites (p.58) but Mattogno omits any mention of the order from his text. Such orders refute Mattogno's claim that Jews were not shot "as Jews" because they show that Jews were not merged with Communists in these policies but were placed alongside them as a group with equal but distinct enemy characteristics whose origins were racial not political: a Gegenrasse.

Orders and organization escalated together in the month of July when Himmler made massive increases to manpower allocated to shootings and issued appropriate orders. The fact that this manpower derived from Himmler's Kommandostab and was directly controlled by Higher SS and Police Leaders (HSSPF) subordinated to Himmler rather than Heydrich's RHSA is a crucial refutation of Mattogno's premise that shooting policies can be inferred from the composition and strength of the Einsatzgrupppen alone. Although Mattogno mentions the number of native auxiliaries deployed in the occupied USSR, and includes the 44,125 persons shot by the forces of the HSSPF in August 1941 in his table of mass shootings, he does not integrate the significance of these facts into his arguments or deal with the explanations given in the secondary literature as to their role in the escalation in the scope and volume of shootings. He knowingly ignores this manpower when claiming falsely that:


The general picture that emerges is this: you can not seriously believe that Himmler had ordered as exclusive or even primary task to a group of about 3,000 soldiers to exterminate millions of Jews in an area that extended for about 1500 km of latitude and for about 1,300 longitude, although they had to be assisted by other units of the SS and Police, which still had the primary task of ensuring the safety of the Wehrmacht and of pursuing anti-partisan struggle (p.171).

This is a lame attempt by Mattogno to cling to an old denier meme that there were only 3,000 men committed to the killing actions. The attempt fails because the literature has shown conclusively that the HSSPF and their Kommandostab units became the main drivers of killing in many areas of Belorussia and Ukraine, not merely providing assistance to the Einsatzkommandos. Infact, the Einsatzkommandos were ultimately subordinate to the HSSPF, which conducted some of the largest massacres of 1941. Mattogno himself has to cite this fact in the next chapter when his table reveals that the 23,600 Jews killed at Kamenets-Podolsk were shot by forces under HSSPF Russia South (Jeckeln), as were 10,000 at Dnjepropetrovsk and 15,000 at Rovno, whilst Jeckeln also oversaw the killing of 4,000 Jews at Rumbula, of which 820 were Reich Jews (p.250). Mattogno also lies outrageously about the 44,125 people shot by HSSPF Russia South, claiming that "nothing is known" about them when infact they are documented in daily reports that are available online in a collection that Mattogno uses several times in the book.[4]

One of the most important moments of escalation that Mattogno fails to address in good faith was the Pripet marshes campaign which Himmler personally instigated in late July 1941 using the SS Cavalry Brigade under his own ultimate command. On July 11, Montua passed on an order by the HSSPF that male Jews aged between 17 and 45 were to be shot as looters.[5] This reflected Himmler's belief that the Soviets had resettled criminals into the marshes. On July 27, Himmler's Kommandosonderbefehl specified that people who were "racially and humanly inferior" were to be shot if they were suspected of supporting the partisans; their villages were to be burned down and the women and children removed.[6] By August 1st, this had become an order from Himmler to kill the women, but the means of killing were ambiguous: "All Jews must be shot. Drive Jewish women into the swamps."[7] Lombard passed on this order to his brigade, stating that "No male Jew stays alive, no residual family in the villages."[8] The killing reports specified "looters", showing that the guiding 'a priori' assumption was still Jewish criminality rather than documented partisan activity:


Jewish looters were shot. Only a few craftsmen who were working in repair shops of the Wehrmacht were left behind. To drive women and children into the swamps did not have the desired effect as the swamps were not deep enough [for them] to sink. In a depth of 1 metre there was solid ground (possibly sand) in most cases so that sinking [bodies] was not possible.[9]

Pieper cites a perpetrator statement that conveys the context in which the killings were understood:


They were shot because they were Jews. There cannot have been any other reason from my point of view. It is out of the question that they supported the partisans or were partisans themselves. I don’t know anything about Jews resisting the German troops at all. According to my observations they always were friendly and loyal. And most of them were women and children down to the smallest baby. With them, too, there were no exceptions made [and they all were killed].[10]

The racial underpinning of this action shows that the phrases 'looters' and 'support for the partisans' were used as cover for shooting Jews "because they were Jews." Some shooters may have reassured themselves that they will killing Jews for military reasons, but the overall pattern was an escalation that encompassed all Jews regardless of any rational basis for defining them as looters or partisan colluders. The bogus nature of the partisan warfare excuse is shown by the fact that, when Fegelein reported on the unit's killings in the two-week period from late July, it recorded 13,788 dead "plunderers" against 714 prisoners captured.[11]

Mattogno commits a typical fallacy of excluded middle by assuming that any action that included an anti-partisan component could not also be a "Jew hunt." Infact his modus operandi throughout the Italian screed is to deny that any action can be "both A and B" not "A or B." The Germans killed partisans but they killed far larger numbers of Jews "as Jews" because they believed the Jews were the racial root of the enemy and had to be killed on racial grounds, as I noted here.

Mattogno accepts the excuse that the Jews had been "giving support to the partisans", but this was an a priori assumption by the Germans that was never validated by evidence. Mattogno's interpretation is refuted by the racial underpinning of the orders, which ultimately use 'looters' and 'support for the partisans' as cover for shooting Jews because they were Jews. Some shooters may have reassured themselves that they were killing Jews for military reasons, but the overall pattern was an escalation that encompassed all Jews regardless of any rational basis for defining them as looters or partisan colluders. In addition, Jews and partisans [Freischaerler] were named separately in some reports. For example, the report for 28.7 to 3.8 stated, "3,000 Juden und Freischaerler erschossen."[12] Mattogno has seen this document because he cites the Magill report of 12.8.41 from the same YVA folder but he still claims the Jews were shot purely as a "scorched earth" policy to deprive the partisans of support (p.117).

Mattogno also attempts to discredit the documentation concerning the Pripet marshes by making a spurious forgery allegation concerning Himmler's order to "Drive Jewish women into the swamps." Mattogno (p.119) commits a common self-contradiction within Holocaust denial of assuming that a document is simultaneously implausible and forged, going against the logic that a forger would actually strive as much as possible to make the document plausible. In this case, Mattogno believes Himmler would never have ordered drowning in a swamp, but he sees no contradiction in claiming that a forger would apply that order to Himmler's name. Moreover, Mattogno ignores the fact that driving Jews into "the morass" appears in Hitler's table talk of October 25.[13] The image was clearly in the mind of leading Nazis, either as metaphor or as a mode of killing in the swamps.

Mattogno also detaches this action from those that were happening concurrently in Ukraine, which included the killing of children at Bila Tserkva, as I noted here. Mattogno infact systematically dodges the documents that make clear the inclusion of children in killings, or is forced to claim that any such documentation is forged, as with the second Jaeger Report. He is therefore stuck in the same denial mode as the CODOH posters whose knowledge of the occupied USSR is slim to none, despite his ability to cite documents no other denier has seen. This is ultimately because his ideological bias is the same as theirs and he is unable to face the Nazi regime's true degree of genocidal criminality. 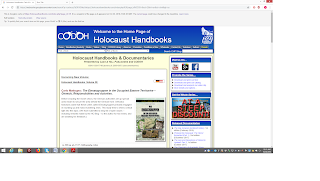