What the CODOHites are saying when they think nobody is watching.

Remember how CODOH is supposed all to be about rationality, arguments and no hidden agenda whatsoever?

Except they used to have this hidden subforum called VIP Lounge, accessible only to the "time honored & trusted Revisionists", to quote Jonnie "Hannover" Hargis.

Well, here's what they really write when they think the Traditional Enemy is not watching. 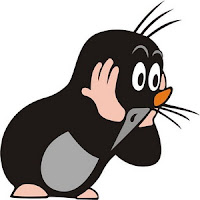 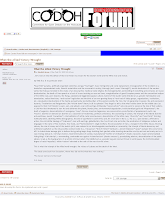 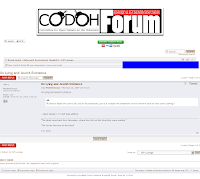 But apparently Friedrich Braun began to be too transparent about his neo-Nazism also in the public forum, which is why he was censored by Hargis and decided to tell the truth about his moderation practices:

More interesting than Braun's stale rants are the posts by Carto's Cutlass Supreme. This guy is a total dimwit, but since he is better known as Denierbud, whose series of youtube videos got completely debunked here, he is somewhat of a figure on the denier scene. He tries to keep the more neutral facade in the public forum but lets loose in the VIP section.

Here's him ranting about poor persecuted Nazis and neo-Nazis like Matt Hale (convicted for soliciting murder of a federal judge), the Aryan Nations and Julius Streicher.

As you see, he also mildly castigated the liar "Mark_Twain", the neo-Nazi behind judicial-inc.biz, for being inaccurate about his facts (indeed, the fellow was so bad that even the dishonest denier Carlos Porter had to debunk him). MT then basically admitted he was engaging in pure propaganda and just using random pictures on his website. Here is the continuation of that thread:

Here is CCS possibly on drugs, tripping about being a part of a cosmic drama, battling against the evil Jews (and showing his ignorance about basic religious matters - according to the mythology all people come from Adam, not only Jews).

It is clear that CCS is an ignorant kook. Here is him espousing a crazy theory he made up when he learned that Yiddish is based on old German (because he is the first person in the world to have noticed that, apparently):

Here is one of the neo-Nazis making an anti-Arab joke and another castigating him for purely Reapolitik reasons.

Speaking of Realpolitik, these deniers are indeed concerned about their "outside world" image. Here is Hannover-Hargis responding to the aforementioned self-confessed bullshitter Mark_Twain asking him to tone it down with the explicit anti-Jewish talk: "Try more specific descriptions like 'Zionists'". Of course this concerned merely the external appearance, it is clear that Hargis agreed with MT.

This wasn't a one time occurrence with MT:

And here is CCS being concerned about Braun's open rabid antisemitism, while admitting that he believes "what he's saying is the truth" and that he "can understand Braun's sentiment completely".

And if you think everything you've read so far was bad stuff, consider what was in the threads that had to be pulled even from the private VIP Lounge:

There are tons of more fun stuff like this where this came from, but that's all for today. 😃
Posted by Sergey Romanov at Monday, May 01, 2017