The tree-hanging photo was not a fake after all...

For years I thought that the famous tree-hanging photo from Buchenwald was a fake. That is, a propaganda photo (or a montage) that was specifically made in order to deceive.

I based this on an article by Wolfgang Ayaß and Dietfrid Krause-Vilmar "Mit Argumenten gegen die Holocaust-Leugnung" in Polis №19, the relevant part of which was based on Herbert Obenaus, "Das Foto vom Baumhängen - ein Bild geht um die Welt", in Gedenkstätten-Rundbrief, №68. 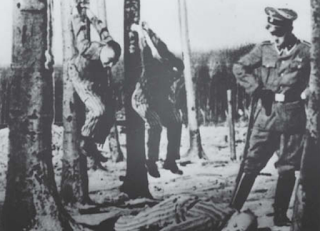 According to these authors the photo was staged by DEFA. But as someone has pointed out, there is now a newer piece of research that establishes the actual origin of the photo. It's Holm Kirsten, "Das Fotoarchiv der Gedenkstätte Buchenwald", Archive in Thüringen, Tagungsband 2010, S.22ff. Kirsten writes that it has recently become possible to find out the name of the photographer - it was the former inmate Willem Hoogwerf from the Netherlands who made the photos with a camera that was a present from an American solider. This and a couple of other similar photos were made between 15 and 26 April 1945. The original description of the photo was found:


Reconstruction of one of the "light punishments". The SS man was forced by the Americans to cooperate. Later the SS personnel were shot, exactly like in Dachau, Neuengamme, etc.

The photo thus was not intended to deceive and was clearly marked as a reconstruction (which represented something that actually had happened). That later propagandists misused it, ignoring the original intent, does not make the original photo a fake, nor does the fact that it does not depict an authentic scene - it's no more fake than Schindler's List or Katyń.

Obviously, deniers have been using it as an example of Allied fakery - and I can't blame them - but if they want to be honest, they should stop doing it now.