I see you are again posting on the "CODOH Revisionist Forum", which you once (in what I presume was one of your brighter moments) condemned in very clear terms (post # 26 on the thread "A message to Jonnie Hannover Hargis ..." of the extinct RODOH forum, screenshot after the cut). 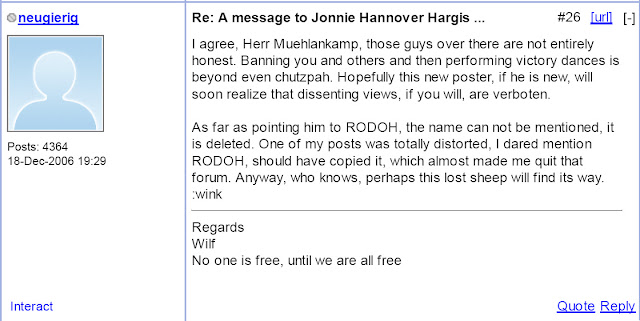 Having thus witnessed again to what depths you are prepared to sink for the sake of your Nazi articles of faith, I'm not surprised at your somewhat-less-than-gentlemanly behavior in some of your recent CODOH postings.

Perhaps it's because you feel inspired by the mendacious smear tirades of a psychopath by the name of Carmelo Lisciotto, who kisses "Revisionist" behinds under the handle "Blogbuster", and whose verbiage is apparently echoed by one feeble-minded "twila".

Perhaps it's because you miss our conversations on the extinct RODOH forum.

While it is true that you were always prone to talking about people behind their backs, your current mouthing-off about me on CODOH is a particularly sad sight to behold.

So have I suggestion for you:

In case you still distinguish yourself from most other "Revisionists" in that you are not afraid of meeting your opponents head-on instead of bitching about them in safe places like the CODOH Führerbunker, come out and meet me on either or both of the two forums where I currently post on occasion (and where the mental gymnastics that you try to defend your Nazi heroes with are likely to be the source of some amusement):

I'm looking forward to meeting you on either or both of these forums, Mr. Heink.

Update, 03.06.2012: Apparently in reaction to my mention of him in this blog, Carmelo "Blogbuster" Lisciotto produced some more of his imbecilic paranoia (or shall we say imbecilic lies?), along with the usual pandering to "Revisionists". I liked the part about my "running strong" on the JREF forum, where I have until now posted only 7 messages. Those few messages must have made quite an impression on poor Carmelo.:-)

Update, 13.06.2012: My invitation to Wilfried "neugierig" Heink, who has shown no inclination to meet me outside the warm and cozy Führerbunker, is also extended to "Charles Traynor", the despicable individual who wrote this mendacious piece of smear and self-flattery in the CODOH Cesspit:

The likes of Nick Terry, Roberto Muehlenkamp and KentFord9 bailed from dedicated holocaust forums like RODOH and CODOH because their posts were being regularly eviscerated by revisionists.

If the JREF forum or the Skeptics Society Forum should be too much for Mr. "Traynor"'s feeble mind to handle, he is free to propose another forum of his choice, provided of course that I'm allowed to post there.

That also goes for "Traynor"'s fellow bigmouth "Mortimer", who is obviously another "Revisionist" coward trying to "justify" his fear of open debate with self-projecting claims about those he prefers to hide from, and whose "zionist internet trolls" blather suggests that he has at least as many loose screws inside his head as Mr. "Traynor". I'd love to see the fellow trying to make an "airtight argument".
Posted by Roberto Muehlenkamp at Saturday, June 02, 2012