In a discussion following my blog 5 million non-Jewish victims? (Part 2), our reader "HLAPOT" remarked that, as concerns the Soviet Union’s human losses during the Second World War, there is at this point in time a demographic estimate (the one presented by Michael Ellman and S. Maksudov in their 1994 article Soviet Deaths in the Great Patriotic War: A Note) that "lacks a satisfactory explanation", i.e. is not or insufficiently substantiated by evidence-based death counts.

This apparently remains true more than 1 ½ decades after Ellman and Maksudov’s article. A solid scientific breakdown of the enormous figure of almost 27 million excess deaths in the Soviet Union during the "Great Patriotic War", especially as concerns the civilian component, has to my knowledge not been provided by historiography so far.

To be sure, there are breakdowns like the one of Soviet civilian losses by A.A. Shevyakov, presented in Table 3 of the aforementioned article. But these cannot be taken seriously, as Ellman and Maksudov expressly point out regarding Shevyakov’s figures. The closest that academic publications of historiography have come to a reliable breakdown of excess deaths among the Soviet civilian population in the "Great Patriotic War" still seems to be the one in the following footnote of Ellman and Maksudov’s article:

According to preliminary calculations made by one of us ( ' 0 frontovykh . . .', p. 119), deaths from the German occupation (killing of Jews, deaths in the siege of Leningrad, deaths of civilians resulting from the fighting, excess deaths in the occupied territories resulting from the deterioration in living conditions) were about 7 million. Of these, about 1 million were in the siege of Leningrad, and 3 million were Jews. Of the latter, about 2 million were Jews from the newly annexed territories, and 1 million Jews from old Soviet territory. Excess deaths from the deterioration in living conditions in the non-occupied territories seem also to have been about 7 million. Soviet repression (deaths in camps and among the deported nations) probably claimed about another 3 million. In addition there was a population loss of about 2 million as a result of emigration, mainly to Poland. These are rough preliminary estimates on a topic which still awaits serious research.

This desideratum of historical research makes it interesting to look at a breakdown made in 1972 by a British writer named Gil Elliot, without the benefit of sources that only started becoming available almost 20 years later following the breakup of the USSR. The following text was transcribed from pp. 54-59 of Elliot’s Twentieth Century Book of the Dead (1972 Charles Scribner’s Sons, New York). 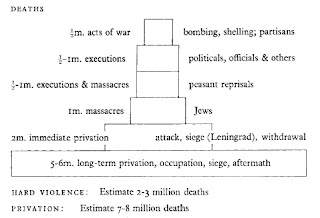 If Elliot’s estimates seem to be little more than educated guesses, that doesn’t make them very different from much of what historians have managed to provide so far on this subject. As concerns the siege of Leningrad and the categories "politicals, officials and others" and "peasant reprisals", Elliot was not far from what recent historiography has established. German historian Dr. Dieter Pohl estimates at over 1 million the number of non-Jewish Soviet civilians that perished in camps, in "bandit-fighting operations" and in other murders, thereof about half a million in rural anti-partisan operations. German historian Christian Hartmann writes the following on page 789 of his book Wehrmacht im Ostkrieg. Front und militärisches Hinterland 1941/42 (my translation):

According to demographic calculations, a total of 26.6 million Soviet citizens died in the "Great Patriotic War" – among them 3 million Soviet prisoners of war, 2.4 million Soviet Jews and another 500,000 people who perished due to the partisan war.

The number of Soviet Jews given by Hartmann (his colleague Hans-Heinrich Nolte speaks of 2.6 million murdered Soviet Jews out of 2.7 million who fell under German rule) shows that Elliot’s estimate of murdered "Russian" Jews was way too low, though it coincides with Ellman & Maksudov’s figure for Jews from old Soviet territory (as opposed to those from areas annexed to the Soviet Union in 1939/40). On the other hand, the enormous difference between the demographic estimate (26.6 million) and the sum of Hartmann's partial figures (5.9 million) is further confirmation that Elliot was right about the predominance of deaths due to privation over deaths from what Elliot called "hard violence", and that historiography remains uncertain about where and due to what causes most Soviet civilian victims of the 1941-45 war (estimated at 9-11 million by Elliot and 14-17 million by Nolte and by Ellman and Maksudov) lost their lives. Conjectural though Elliot’s 1972 breakdown may be, it comes across as a more detailed realistic breakdown than has so far been provided in academic publications by historians. Unless I missed something, historiography's best throw so far can be found not in an academic publication but on the Axis History Forum, namely in Dr. Nick Terry's OP on the thread Soviet Death Toll in WWII As A Whole.
Posted by Roberto Muehlenkamp at Friday, September 23, 2011