What follows is my translation of excerpts from letters written by police secretary (Polizeisekretär) Walter Mattner, administrative officer with the Local SS and Police Commander at Mogilev, to his wife between 22 September 1941 and 19 April 1942. The original text of these excerpts is transcribed on pages 27 and 28 of the document collection Deutscher Osten 1939-1945, edited by Klaus-Michael Mallmann, Volker Rieß and Wolfram Pyta, 2003 Wissenschaftliche Buchgesellschaft, Darmstadt. The source given is BAL (Bundesarchiv- Außenstelle Ludwigsburg - German Federal Archives, Branch Office Ludwigsburg), Dok. Slg. Verschiedenes (Document Collection Miscellaneous) 301 v (0.48), Fl. 260f., 263 ff.


22.9.1941
"If I were not already a National Socialist, the first day of my war service would have made me a one hundred per cent one."

2.10.1941
"I should be going to sleep already, for it is already 21 hours, and I volunteered for a special action tomorrow. Waking is at 4:30 hours, and at 5:30 we'll be pulling out. Tomorrow I shall for the first time have the opportunity of using my pistol. I have taken along 28 rounds. This will probably not be sufficient, but another comrade will lend me his pistol or rifle. I don't even know if I'm supposed to write you this, but you have known for long that the Jews are our misfortune, and on the ride from Warsaw to here we again and again found out how many comrades are already resting in the cool earth. […] And thus sleep many young men, single and married, the flower of the German nation, in order to save our home from the monsters we got to know here. It is simply terrible having to look at these Asian hordes. How we European people feel at this. […] You can now understand the bitterness that dominates me and that all here feel when thinking of our home and our great fateful struggle which we have to fight out here for our people. What do we care about one thousand two hundred Jews that are again too many in a city and must be bumped off, as the nice expression goes. It is only the just punishment for so much suffering they have caused to us Germans and still cause. Until I get home I shall have nice things to tell you. But now enough of this, otherwise you'll think that I'm bloodthirsty."

5.10.1941
"I still have something else to report to you. So I was really there at the great mass dying the day before yesterday. When it came to the first vans my hand was still trembling when I shot, but one gets used to this. When it came to the tenth van I already aimed calmly and fired surely at the many women, children and babies. Considering that I also have two newborn babies at home, which these hordes would treat just the same way, if not ten times worse. The death that we gave them was a nice, short death, compared [to] the infernal torments of thousands upon thousands in the dungeons of the GPU. Newborn babies were flying high through the air and we picked them off in flight, before they even fell into the pit or the water. Just do away with this brood that has thrown all of Europe into war and is now also mongering in America until it has also drawn the same into the war. Hitler's word becomes true, when he once said before the beginning of the war: if Jewry thinks that it can again start a war in Europe, then Jewry will not win, but it will be the end of Jewry in Europe. […] M. has again lost a number with three zeroes, but that is of no consequence here. I am already looking forward to it, and many here say that we will go back home, for then it will be the turn of our local Jews."

9.10.1941
"Someone sitting next to me at the table, a first lieutenant of an SS formation, was just returning from a prisoner transport and told me about the wildness of the Asian prisoners, he said: 'From the dead, those that die on the way, they cut off the asses, put them in the frying pan and eat them. For this they often don't have knives, for they must hand over everything, but use tinned food cans as cutting tools.' You can imagine what cannibals we are surrounded by. I have also often seen them walking by, incredible faces. Tomorrow again a group of gypsies will be finished off. / About 50. / And thus it goes every day. Always something going on. Human life is nothing here. Nevertheless, it is a pleasure to live, and I am still glad that I'm able to experience this fateful struggle of our people and to take part in the fight."

19.4.1942
"In the seven months I have been here and despite being together with hundreds I have not yet heard any rant about no party, for here everyone only feels as 'German', and German today happens to be only 'Nazi'. There's nothing else."

Excerpts from Mattner's letters of 2 and 5 October 1941 are also quoted by Christian Gerlach in his book Kalkulierte Morde: Die deutsche Wirtschafts- und Vernichtungspolitik in Weißrußland 1941 bis 1944, pages 588 and following. Gerlach gives the following reason for quoting these excerpts (my translation):

Until know I have refrained from describing massacres and cruelties in all their details. The ever equal sequences are known, and repeating them brings little new cognizance. However, insofar as the depositions of former perpetrators – riddled with lies and self-apologetic claims – have been made the basis of research, and the alleged revulsion of each individual murderer while murdering is not assessed in a sufficiently critical manner, the rare testimonies where the perpetrators openly describe their feelings and satisfaction at the time of the deed gain value. Such a source is available in this case with the letters that Vienna police secretary Walter Mattner, who at the time was 36 years old, wrote to his wife from Mogilev.

In footnote 518 on page 589, Gerlach provides the following information about Mattner's letters (my translation):

Walter Mattner's letters of 02. and 05.10.1941 as well as his interrogation on 25.10.1947, which confirms the authenticity of his letters: IfZ Fb 104/1 not paginated. These are excerpts for judicial purposes from the publication of T.[uvia] Friedman (editor), Orders and Declarations of German Nazi Criminals about the Shootings of Jews in Russia in the Years 1941-43, edited by the Historical Documentation Haifa, July 1959. – At a later stage at least, Mattner was a member of the office of the Local SS and Police Commander in Mogilev, First Lieutenant of Order Police K., who was also from Vienna. See also the certification of the police administrative public servants in service in the area of the Head of SS and Police Central Russia and Belorussia (undated, 1943), Public Prosecutor’s Office Nürnberg-Fürth 12 Js 300/67, Document Volume 4, Fl. 239.

The massacre of 2,273 Jewish men, women and children at Mogilev on 2 and 3 October 1941, according to Gerlach (as above page 587), was "in a sense the starting shot" of the project to murder all Jews in the rear area of Army Group Center. Constant massacres took place thereafter, but the first was remembered more precisely by the perpetrators on account of its special brutality. 65 persons were shot on 2 October while the victims were driven out of the ghetto, the other 2,208 were kept overnight in the area of the Dimitrov automobile works and murdered the next day. The units taking part in this massacre were Einsatzkommando 8, police battalions 316 and 322, Ukrainian Schutzmannschaft battalion 51, staff members of the Head of SS and Police office and the Local SS and Police Commander's office and the police detachment "Waldenburg", later renamed "Mogilew" (Gerlach, as above, page 588).

A photo taken during a later massacre in the Mogilev area, which is mentioned in the blog That's why it is denial, not revisionism. Part IX (3): «The reports of the Einsatzgruppen …, is included in the collection Photographic documentation of Nazi crimes (click on image to enlarge): 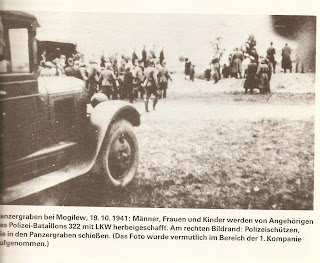 
Anti-tank ditch near Mogilev, 19.10.1941. Men, women and children are brought in trucks by members of Police Batallion 322. On the photo's left corner: shooters are shooting into the ditch. (The photo was probably taken in the area of the 1st Company.)

Update, 18.07.2016: Replaced "borrow" by "lend" ["me his pistol or rifle"]. Thanks to Jonathan Harrison for bringing this translation mistake to my attention.
Posted by Roberto Muehlenkamp at Sunday, June 06, 2010