During the Nazi occupation of the Soviet city of Kharkov, many thousands of people were murdered in a ravine near the city known as Drobistki Yar. The majority of the victims were Kharkov Jews that had not managed to flee in time, most of whom were were killed in a large massacre in early January 1942.

Proof of this massacre comes from various Soviet and German sources, including but not limited to those mentioned in the blog Neither the Soviets nor the Poles have found any mass graves with even only a few thousand bodies … and the HC forum thread Kharkov under Nazi Occupation.

The killing was done by Sonderkommando 4 of Einsatzgruppe C together with an SS platoon, a platoon of the 3rd Company of Police Reserve Battalion 9 and Police Battalion 314, according to the judgment LG Darmstadt vom 29.11.1968, Ks 1/67 (GStA), published in Vol. XXXI of the University of Amsterdam's Justiz und NS-Verbrechen collection as Case Nr. 694.

Regarding the number of victims and the evidence from which this was concluded, the Darmstadt Court stated the following (my translation):

The execution of Kharkov’s Jewish inhabitants and the number of victims cannot be proven on hand of an Operational Situation Report USSR. However, the defendants don’t deny that the Jews of Kharkov were gathered in the ghetto by Tractor Factory 10 and then in early January shot according to a pre-established plan. Even the defendant Rie. claims to have heard about this.
The number of at least 10,000 Jewish men, women and children results, to the court’s conviction, from the statements of the defendant Con. Con., who kept the war diary and therein also recorded the reports about this execution, stated that the number of persons killed recorded in the war diary was between 10,000 and 20,000, for he could still remember with certainty that the first number had been a 1 and it had not been a thousand number but a number with an additional digit. According to his knowledge of occurrences at that time, which he had obtained in part from his own experience and in part from questions he had needed to ask for the record in the war diary, he did not consider this number too high. After Con. had already in the preliminary proceedings stated a number between 10,000 and 12,000 victims, a minimum of 10,000 victims had to be assumed. This number was also confirmed by the defendant Woi., who stated that a number around 10,000 was accurate.
Also the witness Ebe., member of the attached 3rd Platoon of the 3rd Company of Police Reserve Battalion 9, credibly estimated the number killed at 8-10,000 based on his knowledge. The witness Fli., driver of the 297th Infantry Division driving the division medic, who in Khrarkov saw the column of the Jews and shortly thereafter learned details about the execution from an SS-Oberscharführer who for some time was with his unit in Chuguyev, mentioned a number of 10-15,000 victims. The witness Jordan, who at the time was Io staff member at Army High Command 6, informed that in February or March 1942 the SS commander of Kharkov had come from Kharkov to Army High Command 6 for a farewell visit, as he had been transferred. This commander – it was Blobel – had during lunch, when asked what was happening to the Jews in Kharkov, among other things taken out his note book and mentioned a number of 21,685 Jews killed. The court sees no reason to doubt the information provided by this witness, who stated that he had a good memory for numbers and that his number of 23,000 victims in the preliminary proceedings was due to a misunderstanding in taking down his deposition. This number does not contradict the jury court’s findings, however. On the one hand the established number of 10,000 victims is a minimum number, and on the other it seems reasonable to assume that Blobel had also counted the Jews that had been killed before and after the large-scale execution in the Drobitski Yar or had already died of hunger and cold in the ghetto.

There is indeed no surviving Operational Situation Report USSR that mentions the mass execution in the Drobitski ravine and the number of victims, though Operational Situation Report 164 of 04.02.1942, which obviously reproduces a message from an earlier date and is quoted/translated in my post of 03/13/12 13:37:51 on the HC forum, mentioned that the Jews had been collected, that "preparations for the shootings of the Jews are taking place" and that "305 Jews who spread rumors unfavorable to the Wehrmacht were immediately shot".

The Protocol of the Extraordinary State Commission For The City Of Kharkov To Investigate The Crimes There Committed, 5.9.1943 (ZStdLJV, 4 AR-Z-269/60, collection of documents, pages 164-169), quoted in the same HC forum post, states that

According to incomplete data in the months of December 1941 and January 1942 in the proximity of the Rogan works, eight kilometers away from Kharkov, in the so-called Drobizk Ravine, over 15 000 Jews, inhabitants of the city of Kharkov, were shot. These monstrous crimes against the peaceful population are confirmed by the depositions of witnesses, the forensic medical report and other documentary material.

The number given in this report is matched by the deposition made on 23 March 1961 by Phillip F, former member of the 297th Infantry Division, which is also quoted in this post:

It was in the middle of December 1941, when I spent several weeks in Kharkov. I still know exactly today that it was on 15.12.41 when I saw in Kharkov how a trek several kilometers long of Jews in long rows with handcars and luggage moved from the city eastwards to the tractor factory. The tractor factory is about 15 km away from the city center. Among the Jews there were men, women and children. Some cars were drawn by small horses who sometimes broke down under their load. On the cars there were sometimes little children, women and sick people sitting on the luggage. The cold was about 15 degrees (celsius) below zero. I watched the Jews passing by for a full hour and still the trek didnt end. I estimate the number of Jews who on this day were led from Kharkov to the tractor factory at ca. 15 000 persons.

According to the Wikipedia page Drobytsky Yar, the Kharkiv archives contain data on 15,000 victims, whereas the "Drobytsky Yar" foundation considers the number of dead to be closer to thirty thousand.

A number of the latter order is mentioned in an excerpt from pp. 110-111 of a contemporary publication (The People's Verdict: a full report of the proceedings at the Krasnodar and Kharkov German atrocity trials Ignatik Fedorovich Kladov; Ivan Fedorovich Kotomtsev, defendant; Reinhard Retzlaff, defendant.; Wilhelm Langheld, defendant. (NY: 1943, 1944).) quoted in my HC forum post of 03/13/12 13:44:32:

The medico-legal experts examined the places where the German fascist invaders burnt bodies to destroy evidence of their crimesthe poisoning with carbon monoxide. This is the site of the conflagration on the territory of the barracks of the Kharkov tractor plant. Examination of territories on which bodies were burnt or buried, examination of the grave-pits and positions of bodies in them and comparison of material thus obtained with data of the Court proceedings, provide grounds for considering that the number of bodies of murdered Soviet citizens in Kharkov and its environs reaches several tens of thousands, whereas the figure of 33,000 exterminated Soviet citizens given by accused and some witnesses is only approximate and undoubtedly too low.

However, this figure refers not only to the Drobitski Yar but also to other Nazi killing sites in the Kharkov area, as the paragraph preceding the above-quoted one shows:

The Medico-legal experts examined in Kharkov and neighbouring localities the scenes of the crimes of the German fascist invadersthe places where they carried out the extermination of the Soviet citizens. These included the burned-out block of the army hospital, where they shot and burned war prisonersseverely wounded personnel of the Red Army; the place of the mass shooting of the healthy and sick, of small children, juveniles, young people, old men and women in the forest park of Sokolniki, near the village of Podvorki, in the Dobritsky gully, and in the therapeutic colony of Strelechye. At these sites the medico-legal experts examined the grave-pits and exhumed bodies of Soviet citizens shot, poisoned, burned or otherwise brutally exterminated.

According to British journalist Alexander Werth, quoted in my HC forum post of 03/13/12 13:42:08, the "Russian authorities" accounted for "the disappearance of half the population of October 1941" as follows: "120,000 people, mostly young people, had been deported as slaves to Germany; some 70,000 or 80,000 had died of hunger, cold and privation, especially during the terrible winter of 1941-2; some 30,000 had been killed by the Germans, among them some 16,000 Jews (men, women and children) who had remained behind in Kharkov; the rest had fled to the villages". Werth claims that various checks he made on site "suggested that the figure for deaths from hunger, et cetera, was slightly, but not greatly, exaggerated; so too was the figure for non-Jews shot, but the figure for the Jews was correct".

Considering the evidence on which the Darmstadt Court based its findings and the other sources quoted above, the minimum number of 10,000 victims established by the Darmstadt Court for the January 1942 massacres in Drobitski Yar seems rather conservative.

The following two photographs, available in the Ghetto Fighters' House Archives and linked to in my RODOH post of 25-Jul-2005 11:01, are captioned as showing "A mass grave in Drobitski Yar near Kharkov" (considering the size of the Drobitski Yar mass graves - two pits between 60 and 100 meters long and 20 meters wide dug by Soviet POWs at the end of the ravine, according to the Darmstadt Court's judgment - what can be seen is obviously just a small section of one of the mass graves): 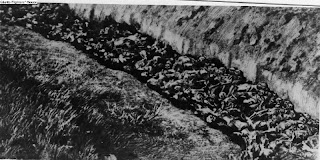 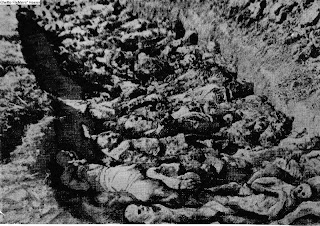 These photographs are of very bad quality and have obviously undergone a lot of retouching, which unavoidably prompted at least one "Revisionist" to claim that they are fakes or drawings (see the discussion on the RODOH thread Photos of mass graves containing Jewish women and children mostly without the, er, children, starting with "Herviborous Moose"'s post 940 ).

However, images of the same mass grave section can be seen in Soviet documentary footage available on YouTube:

Битва за нашу Советскую Украину, "aka Fight for Soviet Russia, aka Ukraine in Flames, Kampf um die Ukraine. Documentary by A. Dovzhenko, Central and Ukrainian Newsreel Studios, 1943, a powerful anti-fascist and anti-German documentary about fighting in the Ukraine in WW2 by Ukraine's greatest film director". Recorded from a program on the Italian channel Rai Tre, Clip 7/8

The following are stills I took from the above footage. Images can be enlarged by clicking on them. 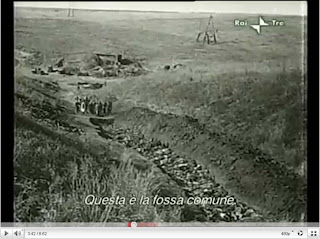 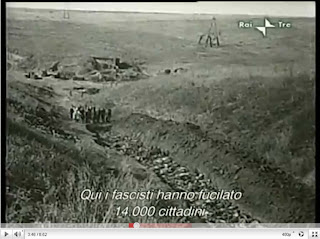 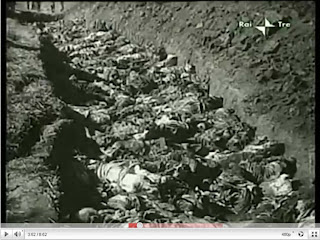 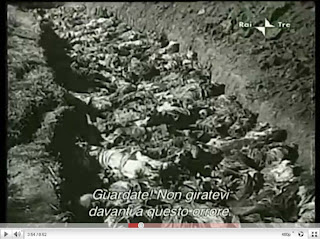 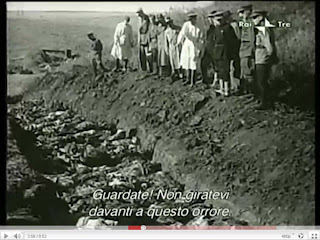 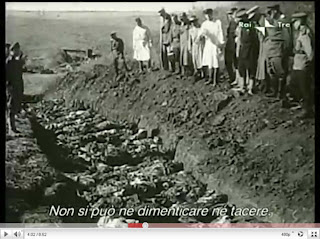 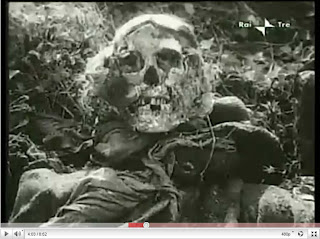 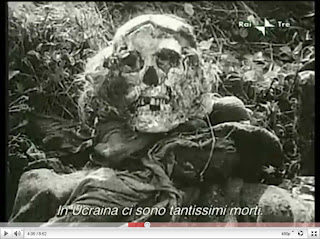 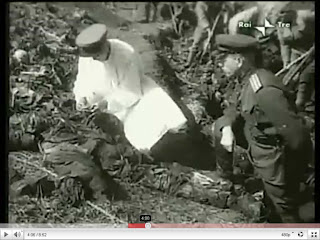 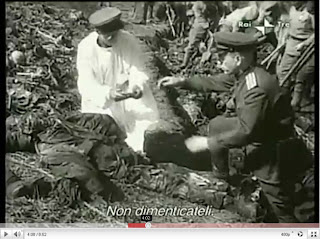 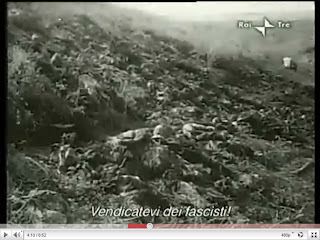 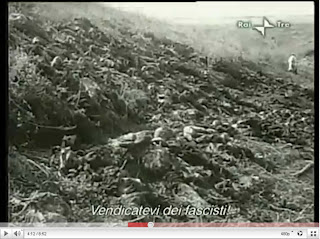 The above-mentioned Soviet documentary goes on to show images of ruined and burning buildings in the city of Kharkov, of balconies on which Kharkov citizens had been hanged, and of further (presumably non-Jewish) victims of the German occupation. Stills of two of these images are shown hereafter, to illustate the fact that, although not systematically exterminated like the Jewish population, the non-Jewish population of Kharkov also suffered grievously under the Nazis: 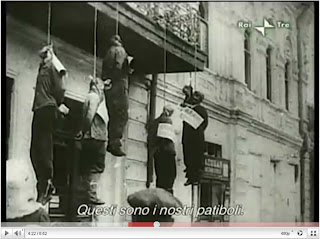 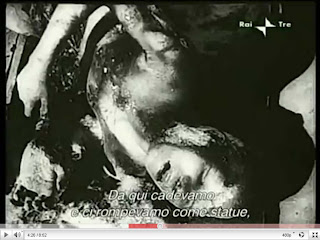