In the "Zloczow" chapter of the Encyclopedia of Jewish Communities, Poland (Volume II) - Eastern Galicia, the liquidation of the Zloczow ghetto in early April 1943 is described as follows:


The ghetto was liquidated on April 2, 1943. Those who worked outside the ghetto were not permitted to go to work on this day. The ghetto was surrounded and the Germans and the Ukrainians concentrated all these people in the market square. During the Aktion there was opposition to the Germans. Women attacked the enemy to save their children. During the Aktion the Germans asked the chairman of the Judenrat, Maibloom, to sign a document. According to it there was a need to liquidate the ghetto because of a typhoid epidemic, which occurred there. Maibloom refused the pleading and pressure of the Germans to sign the document, and for this reason he was murdered on the spot. Other members of the Judenrat, Schwartz and Yakir also refused to sign the document, and they were also killed. From the market square the people were taken by truck to a pit near the village of Yelhovitsa, about four kilometers east of Zloczow, and were murdered by gunfire. Many were buried when they were still alive. Only two Jews succeeded in fleeing from this place of execution. In all about 6,000 were killed.

The date of these events was 2 April 1943 according to the above-quoted source, 3/4 April according to German historian Thomas Sandkühler's book Endlösung in Galizien (1996 Verlag J.H.W. Dietz Nachfolger GmbH, Bonn), page 258.

This was just one of so many massacres committed by German forces in Eastern Europe during World War II, and certainly not the biggest. The liquidation of the Zloczow ghetto is unusual only in that it is described in an unusual document, a poem in nine sonnets written, still during the war, by the local deputy director of the German civilian district administration (Kreishauptmann-Stellvertreter), Gerhard von Jordan. The poem was headed "Das Pogrom" and dedicated to "the leader of the new Europe". It was later included in von Jordan’s memoirs Polnische Jahre (Bad Rappenau 1985, private printing) and is partially transcribed from these memoirs on pages 258/259 of Sandkühler’s book.

While not exactly a model of poetry, von Jordan’s sonnets are of historical interest as the endeavor of a witness on the perpetrator’s side to capture the "feel" of the events described, from the point of view (as perceived by von Jordan) of all who were part of or witnessed the massacre, including the victims, the killers, the local auxiliaries and non-Jewish children (von Jordan’s own kids, according to Bogdan Musial, Deutsche Zivilverwaltung und Judenverwaltung im Generalgouvernement, page 333) playing on the streets through which the Jews of the Zloczow ghetto had been driven in trucks to the execution site. I have therefore translated Sandkühler’s partial transcription of these sonnets:

I. The Cordon. They stand watchful by the barbed wire / that forms a barrier across the ghetto. / The carbines turn on anyone / who tries to flee the fray. / The steel helmet covers sedate faces / of fathers old standing out here. / They don't feel judges or accusers. / They serve and don't look right and left. / …

II. The Catchers. They are still young and have an eager glance / the urge to taste the taste of life / of women, flush and grisly fate / and of the horrors that arouse the senses. / They search in stinking small corridors, / in caves, cellars, under feces and dirt / for the frightened who are squeezed together / and pull them off to the collecting square. / …

IV. The Victims. They walk slowly through the bleak alleys, / they know that there is no salvation, / and wonder why they loved so much / this life they are about to leave. / For gruesome is the misery of these figures, / that vice and privation have eroded / and whose eyes have forgotten all joy, / as they struggle tumbling to stay upright. / The clothes stink in the warm air / and dangle wearily on the meager bodies. / Thus a procession of men, women, and aged / passes by in undignified silence. / Only sometimes there is a wailing cry / of a child calling for its mother.

V. The Helpers. At the collection square 'non-German' police, / broad faces of farm hands and peasants. / Ardent zealous they are today / and know no doubt and no regret. / They hate this nation that stole from them, / and they feel liberated by the order. / They angrily recall sufferings past / and rejoice like children in the suffering of others. / They quickly collect in huge baskets / the cheap attires that their victims wear. / They look for money in each crease of clothing. / And then they load like bad cattle / the human bodies onto huge trucks, / and on it goes to the nearby forest.

VI. The Butchers. And the masses walk to the huge pit. / Their clothes are torn off. / Naked they are pushed inside, / and the air resounds with pistol shots. / With glassy eyes completely drunk / men fire from machine pistols. / Into the bodies that have sunk down there, / they shoot, crazed with murderous frenzy. / One sees limbs twitching and wrenching. / Bullets smack into the naked mass, / hit arms, legs, breasts, hands, / thud on heads and joints. / Each of them lies where the shot got him – / and the big dying has no end …

VIII. The Children. Along the way where the truck rolled by, / a dead woman lies in the street dirt, / who, as she tried to get away, / may have been stopped by a rifle shot. / Nobody had time to remove her, / and the children, who are now playing outside, / are standing there with strange feelings / and watch the last big dreaming. / Clear and sharp as children do, / they explain what the day has brought new; / for they know of all the murder. / And the children have become like this, / that it don't impress them much, / for they learned that one may kill.

IX. A Prayer. Lord, who Thou hast allowed all this to happen, / Thou carry with us this heavy guilt. / We ask Thee, have patience with us now, / if we are angry and almost hate Thee. / All-knowledgeable, now Thou canst understand, / why the big murder had to happen. / Take the crust of horror from our hearts, / and let us again go Thy ways. / All-mighty, give us the strength to believe, / that Thou canst forgive also this injustice. / Don’t let our people’s soul be robbed, / don’t destroy the tree with the bad sprout. / Let us free the spirit in the last hour. / Have mercy – and then, oh Lord, forgive!

Other evidence to the killing of the Zloczow ghetto's Jews includes a number of photographs available in the archives of the Ghetto Fighters House, which are also shown in the blog Photographic documentation of Nazi crimes:

The bodies of Jews from the Zolochev (Zloczow) ghetto, in a mass grave

The bodies of Jews from the Zolochev (Zloczow) ghetto, exhumed from a mass grave after the liberation

The bodies of Jews from the Zolochev (Zloczow) ghetto, exhumed from a mass grave after the liberation. 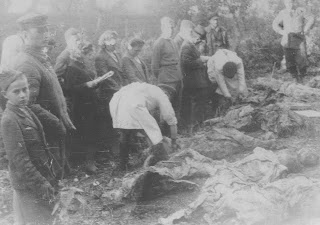 The Jews of Zloczow were almost wholly wiped out, mostly by mass shootings and deportation to the Belzec extermination camp. So were the Jews throughout the Galicia district of the Generalgouvernement, where Zloczow was located. According to Sandkühler (pages 459/460), only 5,000 survived out of a population of at least 530,000 in the summer of 1941, when the attack on the Soviet Union brought Galicia under German domination.

A map at the beginning and end of Sandkühler's book shows the position towards the occupied Soviet territories and towards Belzec extermination camp of the Galician towns and cities whose Jewish inhabitants, if they were not shot on site or succumbed to starvation and disease, ended up at Belzec. This map illustrates the utter absurdity of "Revisionist" claims that Belzec was part of a German policy of deporting Jews to the East, namely to the occupied Soviet territories. Are we asked to believe that the organizers of this supposed gigantic resettlement operation could not tell east from west?