That's why it is denial, not revisionism. Part III: Deniers and Babiy Yar massacre (1)

On September 28, 1941 people of Kiev saw this notice on walls and fences all around the city:


All Jews of the city of Kiev and its vicinity are to arrive by 8 o'clock on the morning of Monday, September 29th, 1941, to the corner of Mel'nikova and Dokterivskaja streets (near the cemeteries).
They are to take with them documents, money, valuables, as well as warm clothes, underwear, etc.
Any Jew not carrying out this instruction and who is found elsewhere will be shot.
Any citizen entering flats abandoned by the Jews and stealing property will be shot. 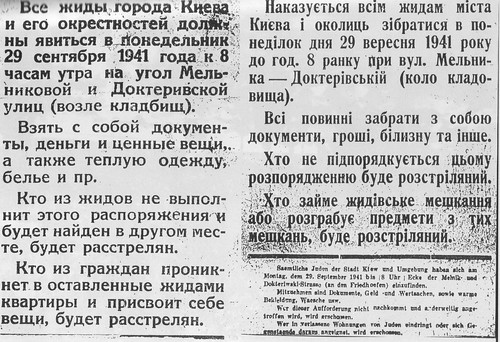 (Note 1: A. Kuznetsov quotes another version of the notice, in which the names of the streets were transcribed as "Mel'nikovskoj i Dokhturovskoj", not as "Mel'nikovoj i Dokterivskoj"; the real streets were actually called Mel'nikova street and Degtyaryovskaja street - it is obvious that the Germans used some bad translator, not a local.
Note 2: the word used in the Russian version is "zhidy", at that time an offensive term, probably better translated as "kikes".
Note 3: the notice actually consists of 1 column - the first part is in Russian, the second in Ukrainian, the third - in German.)

The next day thousands of Jews gathered for a "resettlement". The fate of these Jews is described in at least 9 German war-time documents.

(Note: thanks go to David Thompson for collecting 7 of these documents in one place.)

From testimonies of survivors, perpetrators, bystanders, and from the extraordinary set of photos made by Johannes Haehle we know that the massacre happened in the ravine known as Babiy Yar (Babij Jar, Babyn Yar, Baby Yar). Given the wealth of documentary evidence, I won't even start citing the testimonial evidence for the massacre.

Now, no sane and smart person would even think of challenging the event supported by such iron-clad evidence. But, of course, Holocaust deniers do just that - they either deny or minimize the massacre. Let's see what tricks they use.

Our first patient is certain Herbert Tiedemann, who has written an article "Babi Yar: Critical Questions and Comments" (old version) for Rudolf's Dissecting the Holocaust.

There is not much sense in responding to each and every little "point" Tiedemann makes. It will be sufficient to point out the most significant flaws.

1) Tiedemann does not deal with the documents quoted above except in the most general terms. For example, he mentions the document no. 7 only to cast doubt on it, by citing its exaggerated estimate of pre-war Jewish population of Kiev, as if that could discredit the document in any way. He doesn't quote the incriminating part.

2) In the old version Tiedemann was not even aware of Anatolij Kuznetsov's magnificient Babi Yar: A Document in the Form of a Novel, which just shows that this ignoramus undertook his "debunking" without ever reading one of the most important books on the subject.

3) In both versions Tiedemann quotes only one Jewish Sonderkommando, Vilkis (without designating him as such). Even after finally finding Kuznetsov's book, he doesn't mention Vladimir Davydov, whose testimony is contained therein. Neither is he aware of Kaper, Budnik or Trubakov. Such ignorance is breathtaking.

4) Tiedemann shows his total lack of understanding of Holocaust historiography in general. Consider this:


According to the Brockhaus Enzyklopädie the "order for the final solution of the Jewish question" was issued on July 31, 1941 (Nuremberg Trial Document NG 2586e), and was announced on the occasion of the 'Wannsee Conference' (January 20, 1942).

Quite aside from the fact that historians and other interested persons are still searching in vain for this order for mass extermination, it is more than odd that many tens of thousands would have been slaughtered in Babi Yar before the order was even made known.

Well, duh! Anybody seriously interested in the matter knows that Wannsee conference was concerned with the "solution of the Jewish question" not on the Soviet territory, but rather in a pan-European framework. Genocide of the Jews in USSR started much earlier than in the rest of Europe, and before Hitler decided that all European Jews were to be killed. This is Holocaust Historiography 101.

5) Tiedemann uses the most important rule of denial: if any source reporting about an event is wrong, the event itself is to be doubted. Tiedemann's article consists mainly of quotes of secondary sources, reporting (often incorrectly) about the massacre, and his silly comments. Consider this example:

"Not a single Jew is left in Kyiv because Germans have thrown the entire Jewish population in Kyiv into the river Dnjepr."
Was there not one among all those tens of thousands who could swim? This killing method would have endangered the troops' own water supply, while also causing a very considerable danger of epidemic - a nightmare for any troop commander.
The bodies would have drifted downstream and been noticed by countless witnesses. Why are there no such witnesses?

Pray tell, how this is relevant at all? Yes, an underground agency made a wrong claim. How does this affect the historicity of event itself?

Note Tiedemann's "poignant" questions. Since nobody argues that the Jews were drowned in Dniepr, why ask them? Beating dead horses seems to be Tiedemann's hobby.


A physician named Dr. Gustav Wilhelm Schübbe allegedly killed 21,000 persons single-handedly, with morphine injections. 110,000 to 140,000 victims were allegedly killed in this way at the "German Annihilation Institute" in Kyiv.
Injections of morphine, which was in very short supply and badly needed for wounded soldiers? And how long would it take one physician to give 21,000 injections?
According to the files of the US Document Center in Berlin, which holds more than one million records pertaining to members of the NSDAP ('Nazi' Party), Dr. Gustav Wilhelm Schübbe was never stationed in Kyiv.
Why did neither the USSR nor the Jews ever search for the location of this "Annihilation Institute"?

Again, one strives to find a reason for inclusion of this into the article about Babiy Yar, and doesn't find it. Worst of all, Tiedemann does not even mention the most relevant fact - that Schuebbe was a crippled drug addict.

Since Tiedemann employs this trick throughout the article, it can be safely dismissed as one big non sequitur.

6) Tiedemann shows absolute lack of comprehension of Soviet realities. All his examples of official Soviet reactions to Babiy Yar (Khrushchev's remarks, garbage dump, etc.) are not in the least surprising to those knowledgeable about post-war Soviet Jewish policy. One could think that Tiedemann's treatment of this topic could not have been more ridiculous, but he surpasses himself by asking:


Was he able to find a 'Tiraspolskaja Street' (that's how it would be written correctly!) on a street map of Kyiv, and near the 'place' Babi Yar (which is not a 'place' at all)?

As any decent map of Kiev will show, there still IS Tiraspolskaja street, which is indeed situated not far from former Babiy Yar. How even the idea itself to ask such a question came into poor Tiedemann's head? Oh, inanity!

Well, enough of this. Even reading through this "study" makes one feel stupid. There are still some points to be addressed, such as the overall number of victims and aerial photos, and that will be done in due time.

Previous << Part II: Deniers and the graves of Marijampole