The Soviet Bombing of Auschwitz and Treblinka in 1942/1943

From 20 August to 14 September 1942, the Soviet Air Force flew several air raids deep into the Reich and its Allies. On 4 September 1942, the bombers were sent out for especially far and politically prestigious targets: Vienna and Budapest. In the night of 4 to 5 September, around 00:30 a.m., 12 bombs were dropped on the Kispest area and another 17 bombs on the areas Rózsadomb and Városmajor across the Danube. 11 people were killed and about 60 injured during the air raid in Budapest (see here and here). In Vienna, eight explosive bombs hit the Ostmärkische Mineralölwerke on the floodplain Lobau (BArch R 58/3580, p. 237).

The Allied press celebrated the Soviet coup to strike the (former) Austrian and Hungarian capitals together with the British bombing of Bremen (with at least 116 deaths). The German side commented that the Soviet bombings were "nuisance raids" with "slight damage and some casualities" and "one plane was shot down" (The Vancouver Sun, 5 September 1942). Another article reported that "Russian planes in difficult weather on Friday night started 33 fires in Budapest...Thirty raiders participated in the Budapest attack, and they dropped 17 heavy bombs in the centre of the city" (The Argus, Melbourne, 7 September 1942).

Along their flight paths in the Generalgouvernement, the Soviet bombers already let down some of their load on a number of sites. As the air-planes followed the railway line Kattowitz-Vienna as guidance, four explosive bombs were dropped over Auschwitz, hitting the so-called area of interest of the concentration camp Auschwitz.

A report of the Order Police described the event as follows: 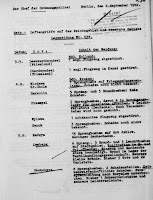 Subject: Air strikes on the Reich territory and occupied territories

This source has been previously cited by Olaf Göhler in 1991 (The Soviet Long-Range Airforces in the Great Patriotic War of the USSR (1941-1945)), but his finding that "on September 4 Soviet bombs were also dropped around Auschwitz" was considered as "open to question" by Joseph White as Göhler did only use this German police report "but not Russian primary sources" (Target Auschwitz: Historical and Hypothetical German Responses to Allied Attack).

Rajsko and Harmense are situated at about 1 to 2 km distance to the camp Auschwitz-Birkenau. Although the bombing is so far not confirmed by other sources, it seems plausible given the detailed description of number of bombs, location and caused damage. In addition, Auschwitz was indeed in the flight path of the Soviet air planes to Vienna.

The map below shows the bombing raids on the Reich and Generalgouvernement according to German police and army reports:


Vienna was apparently approached via Wolbrom in the Generalgouvernement, Auschwitz in Upper Silesia and Vsetin in Böhmen and Mähren.

At 23 p.m. on 4 September 1942, air raid alarm went-off in the Generalgouvernement district Krakau as Soviet air-planes heading to Budapest bombed Wylewa, Przemysl and Sanok before crossing the border to Slovakia and entering Hungary.

Another group of bombers attacked Rava-Ruska. Lviv, Drohobych and Skole before reaching the Hungarian border. At Lozyno near Lviv, a Soviet airplane crashed down and a "Russian officer" jumped-off the aircraft was captured 20 km South near Horodok. The Soviets also dropped leaflets in German, Russian and Hungarian along their flight route.

The Soviet airforce resumed their air-raids on the Reich and Generalgouvernement in spring of the following year.

In the night of 4/5 May 1943, so the German police reported, "some enemy planes also flew from east into the Warthegau and Upper Silesia". The Soviets dropped "9 light bombs" on the area of the IG Farben-Industrie at Dwory (some 10 km at distance to Auschwitz-Birkenau).

Treblinka was struck with "explosive bombs on cleared area" apparently as the Soviet bombers approached targets like Brest, Chelm, and Lublin (situation reports on air raids of the Chief of Order Police of 5, 6 & 7 May 1943, BArch R 58/3581, p. 39-46, see also Figure 3).


The bombing of the Auschwitz IG Farben complex is confirmed by other contemporary sources: