Let's continue our sporadic review of the "revisionist" flora and fauna.

So this little boy, Nick Fuentes, has been in the news lately, what with the mainstream right-wing pundit Michelle Malkin embracing this Holocaust denier (nobody could have seen that coming, nothing like that has happened before) and being shunned by some of her fellow far-right screamers.

Anyway, somebody sent this to me:

Him and his followers are scum of the earth and their bad faith, anti-Semitic attacks should be shot down by the entire conservative movement. pic.twitter.com/7wJ9S7Q6zv
— Caleb Hull 🎅🏻🎁 (@CalebJHull) October 30, 2019

Ooh boy, where do we even start.

The cookie monster thing. You can see that little Nicky is all excited to talk about cookies, that's his intellectual level after all. It goes like this:

What a clever, clever camouflage.

1. Due to the specific illegal procedures involved it took about 1 hour to burn 4 bodies per muffle in the Auschwitz crematoria, as was documented by the Nazis themselves.

2. Obviously, no one credible claims 6 million were incinerated in crematoria; in fact, crematoria were used on a massive scale only in Auschwitz. The other concentration camps did not have to deal with such numbers, and in the pure extermination camps the bodies were incinerated outside, on pyres. Elsewhere the bodies were simply buried, graves of shootings victims are still being found.

3. There were not "15" but 46 oven muffles in Auschwitz-Birkenau. There were also 6 in the main camp but let's ignore them for simplicity's sake since most were cremated in Birkenau.

In reality, with all the children who were murdered (and underrepresented numbers of adult men, who, if they were younger than 65 and deemed "healthy", were usually temporarily saved for work) the rates were much higher.

How is it that the Holocaust deniers and neo-Nazis always fail at both basic history and basic math? IQ too low?

How is it that types like Nicky always fall for the most random and easily debunked hoax claims?

And why is it that they engage in open lies, such as Nicky claiming that no smokestacks are visible on the photos, when they obviously are... 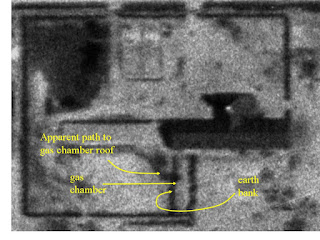 ... along with the smoke from the pyres, confirming the mass extermination (because they wouldn't need to incinerate outside given how many ovens they had - those would have dealt with the "natural" daily camp death toll in a few hours without any problem)?

And of course, given that most of the bodies were directly incinerated (with the exception of about 100,000 that were first buried but caused hygienic problems so had to be disinterred and burned in 1942) there was no problem with "underground storage".

Right after this the child engages in what comes naturally to it - fantasizing. For obviously nobody has claimed "wooden" ovens with "windows". You can almost hear the tiny gears in the child's head grinding, trying to come up with the most ridiculous thing to say next. Such as the use of cremation ovens for delousing.

Well, that's it for this little bro. It's unlikely we'll write about him again unless he shoots up his kindergarten.