What Did Reginald Paget Deny and Accept?

Manstein's defence attorney Reginald Paget has been used by deniers, such as Mattogno and Graf here, to support their claim that there was no extermination policy in the Crimea. Below I will show that Paget's opening speech to the Manstein trial regarding extermination policy was far less convenient to modern deniers than they assume. On the one hand, Manstein supported denial to the extent of claiming that killing numbers in Operational Situation Reports were massively exaggerated and that the SD did not have the manpower or time to carry out that volume of killing. He also denied that the Wehrmacht shot Jews because they were Jews rather than because of partisan warfare. On the other hand, however, Paget accepted that the SD had received "an assignment to exterminate the Jews" and that "resettlement" was a camouflage term for execution. 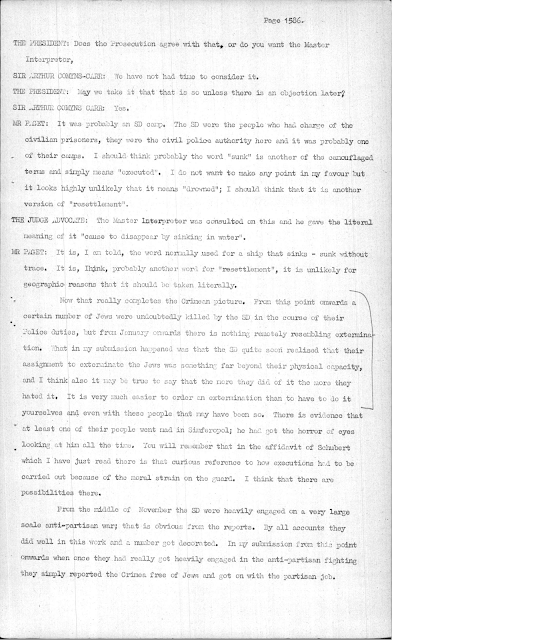 It can be seen from this that Paget accepted that the SD had been given an "assignment to exterminate the Jews" but claimed that, for logistical and psychological reasons, it was not fulfilled. Conversely, the top of the same page shows Paget conceding the execution of Jews at the Bachtschisseraj civilian prisoner camp in July 1942 (recorded in this document) but denying that they were drowned. He also conceded that "resettlement" was a "camouflage" term for executions. It can also been seen on the previous page (p.25 of TR.4/24) that Paget accepted the execution of 2,500 Jews at Kersch. This had been recorded in a document where, as the court proved by forensic analysis, execution had been crossed out and replaced by "resettled." Paget therefore also conceded, by accepting that document, that resettlement was used as camouflage language.

Paget's claims about the survival of large numbers of Jews in Simferopol and the logistical impossibility of killing such large numbers with the available personnel have already been refuted in excellent pieces by Roberto here and Hans here. My next article will refute his claim that Manstein was not culpable of Nazi crimes against Jews.
Posted by Jonathan Harrison at Tuesday, April 03, 2018