A Charge of Forgery Supported by Forgery: The Smearing of a Genuine Auschwitz Photo

[An introductory note by Sergey Romanov: as I was browsing through the denier accounts on Twitter, I noticed that a new wild denier "theory" has appeared regarding the famous Auschwitz Sonderkommando photos (whose authenticity is not in any doubt despite the denier allegations). Turns out the CODOH zombies discussed it too, in all earnestness. I also found a very neat refutation of this claim on a Hungarian skeptics blog, asked the author if I could re-blog it here and got the permission. This case shows once again that there is no half-baked, harebrained conspiracy scheme that the deniers won't latch onto in order to deny the proven facts of history.]

Unsurprisingly, the process of industrial-scale genocide perpetrated in the Auschwitz death camp has been documented only by a few photographs taken on the spot. The exceptions include four photographs clandestinely taken by a few members of the Sonderkommando, the prisoners forced to dispose of the huge amount of corpses coming from the gas chambers. The photos were smuggled out of the camp in a tube of toothpaste, along with an accompanying letter. Out of the four photos, the best known is this one, showing the area of an open-air burning pit behind Crematorium V: 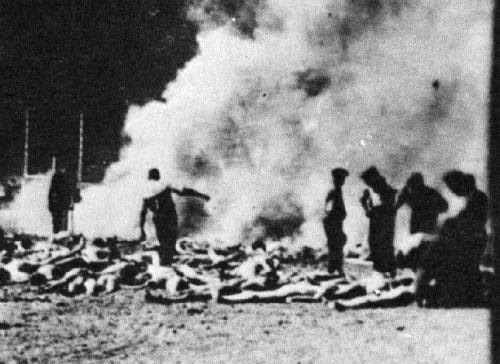 The photo shows the members of the Sonderkommando doing their job around the cremation pit. Smoke rises from the pit, and plenty of corpses to be cremated lie all around.

The photo has been known since 1945. Although its original negative is lost, a number of contact prints can be found in the Auschwitz Museum, along with a large print over 18 inches wide. There is also a version with lower contrast, where more details can be discerned.

Holocaust deniers question the genuinity of most Auschwitz photos. However, they used to have only a few objections regarding this photo, except trying to argue about the number of corpses, their seemingly unusual anatomical positions and the causes of their death. Recently, however, a new suggestion appeared in a few holocaust deniers' forums. Someone watched an episode of Ghost Adventures, a paranormal television series on Travel Channel, and noticed that a photo showing surprising similarity to the Auschwitz photo was presented as an illustration of a 1912 train accident that occured near Dresden, Ohio: 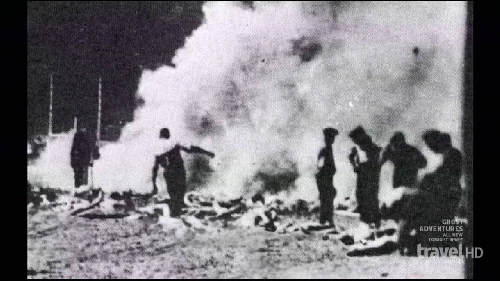 However, the photo presented in the programme shows much fewer corpses than the Auschwitz photo; or maybe they are not even corpses but some debris or train wreckage. Immediately, the charge was raised that the Auschwitz photo is in fact fake; it is a modified version of what is actually a photo of an 1912 Ohio train accident.

Let's examine this claim! In this episode of Ghost Adventures, titled Prospect Place, several photos are presented (around 9:00 minutes) to illustrate the train accident:

We can use Google's image search which has the nice feature that we can upload an image and search by it. Thus, we can upload screenshots from the episode and find corresponding images on the net. In a few seconds, it turns out that the first image is actually a photo of a Texas train accident (Bowie, TX) while the second one is that of a California train accident. Besides, others have already noticed that the photos of burn victims shown in the episode are actually modified versions of photos of Hiroshima bomb victims.

It is obvious, then, that Ghost Adventures didn't present photos of the actual 1912 Ohio train accident. The crew probably used Google's image search to find old photos to illustrate the topic, and they modified them to fit their needs. We cannot really blame them for this; after all, this is not a historical documentary. It is a paranormal show for entertainment purposes. The train accident is not the main topic of the episode, and these photos are only shown for a few seconds.

However, it is still possible that the photo shown in Ghost Adventures is the original one (possibly indeed showing a train accident), and the Auschwitz photo was created by modifying it. This is somewhat doubtful, though, as there seems to be no reason why an inward-curving barbed-wire fence would be set up along railroad tracks. Besides, we haven't been able to find on the net a copy of the photo shown in Ghost Adventures with a date earlier than 2010 (this particular episode was first aired in January 2010).

Carefully examining the patterns of the ground in the lower part of the photos, it can be seen that some patterns are exactly repeated in the Ghost Adventures photo. These same patterns can also be found in the Auschwitz photo, but they are not repeated: The upper image is the one shown in Ghost Adventures, and the lower one is the Auschwitz photo. Rectangles with the same color enclose identical portions of the images.

There is thus no doubt that the Auschwitz photo is the original one. The other photo was created by digitally removing most of the corpses by copying and repeating portions of the ground. Most likely, this editing job was done by the Ghost Adventures crew. They probably didn't do it for fraud. It was very unfortunate, however, that they couldn't find anything else but an iconic Auschwitz photo to illustrate a train accident, and they even adjusted it to fit their needs. And of course, it is no surprise that the extreme confirmation bias of holocaust deniers led them to jump to conclusions, immediately proclaiming that it must be the Auschwitz photo that is fake.