Still stunned that Eric Hunt, who used to be one of the leading and most prominent deniers active on the internet, quit Holocaut denial. As Sergey has pointed out, while his main arguments to reject Holocaust denial (lack of evidence to account for the missing Jews and generally the wide range of evidence on Nazi atrocities) are no doubt good ones, some of his minor points he raised still have potential for improvement, so to say.

One such example is his treatment of the Auschwitz Album photograph showing a Jewish woman held by Jewish men near the crematorium 5. In the known context of the extermination of unfit Jews in Auschwitz-Birkenau it is likely that they were about to get murdered at crematorium 5. Quite possibly, the woman remembered rumors or sensed what was about to come and refused to advance further. Not unlikely given the close proximity to the killing site where they are.

According to Hunt, the three men who "almost look like gangsters" were members of the so called Jewish Sonderkommando working at the extermination site. But it's probably more simple than that.

"This is an elderly Jewish woman being forcibly restrained and forced into the entrance of Auschwitz-Birkenau’s Crematorium 5 to be gassed. The cameraman is steps in front of Auschwitz II – Birkenau’s Crematorium 5, the entrance is close to his back. Crematorium 4 is and a pathway is in the background. Various armed guards and a truck are visible. I put forward that an uncomfortable hidden truth of this photograph is that those manhandling the woman are apparently the “Sonderkommando” Jews. These were Jews forced to work in the process of gassing and cremating doomed Jews.
...
This woman may have heard the rumors, or otherwise realized she was going to be executed. She may have heard screams from inside the crematorium. She is being dragged towards a gas chamber in Crematorium 5 by three Jewish “sonderkommando” against her will and resisting with her might and last breaths. Look at those restraining her. They almost look like gangsters, don’t they? Look at their clothing, possibly assembled in accordance with sonderkommando testimony from the former dress of those rich Jews gassed beforehand. Judging from body language, the “Nosferatu” looking man on the left have tried to calm her with lies, such as “it’s just a shower” which lines up with sonderkommando testimony."

(Eric Hunt, The End of the Line)

The three men are dressed pretty much like many other men from the Jewish transports from Hungary. The entire transport would have been made up of  "gangsters" -  this was apparently the dress code among Hungarian Jews for their journey at the time.

So why not go for the explanation that the three men are just that - Jewish deportees selected as unfit for work at the ramp and sent to crematorium 5? It is entirely conceivable that victims - either not seeing the danger or realizing the helpless situation - were trying to calm down other victims who were getting hysterical. It's not that the scene could not be properly explained without the Sonderkommando hypothesis. Nothing is gained by assigning these men as members of the Jewish Sonderkommando, but one encounters some other problems instead.

Suppose the Sonderkommando men were allowed to "camouflage" themselves as deportees selected as unfit for work, just how would the SS or the Kapos or the Sonderkommandos themselves discriminate between the Jewish victims to kill and the Sonderkommandos? It would not have been a bright idea from the Nazis. We know from the secretly made photographs of the crematorium 5 extermination site (see here and here) that the Sonderkommando prisoners were rather uniformly dressed in light shirts and prisoners' caps in the Summer of 1944 (similar to the so called Kanada detail sorting the effects of the deported people): 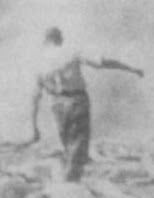 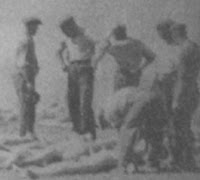 It's these kind of guys we would expect to see on the Auschwitz Album photograph if they were actually Sonderkommando prisoners.

The Auschwitz SS did select mostly the young and strong men for the Jewish Sonderkommando, many known survivors were in their 20s or early 30s in 1944 (some of the SKs who died in the camp were supposedly around 50 years though; Friedler, Zeugen aus der Todeszone, p. 371ff.). The men on the Auschwitz Album photo were elderly, of similar age and shape as those selected as unfit for work at the Birkenau ramp. In fact, the picture in question was placed right into the chapter "men not fit for work" by the SS man compiling the album (ignoring the woman) - he did not recognize Sonderkommando prisoners on the photograph either.