When the usual methodological and historical ignorance characteristic of Holocaust denial gets further reduced to virtual complete historical ignorance and meets some more spitefulness, you get Tattoo Denial. It denies or - in its slightly less silly variant - doubts that Jewish and Soviet prisoners were crudely tattooed their prisoner number in Auschwitz. It's main advocate used to be Carlos Porter, a number of sceptic species can observed right now in the CODOH thread Doubts about Tattoos by the book author Nick Kollerstrom (by the way, the CODOH moderator Hannover delivers a particular thrilling performance in this thread when he reveals that his attention span is less than it takes to read and grasp a single book page). The failure of most Holocaust deniers in this thread to spot some historical truth related to the Holocaust even when its right infront of them says volumes about how defective and irrational the methods, arguments and concepts of this movement are also in general and how common sense is lacking or completely masked by ideological beliefs.

I attach seven German sources on the tattooing of Jewish and Soviet prisoners by the Germans to this posting:

"Once elegant, fun-loving women and young girls are crop-eared, tattooed with a prisoner number on the left forearm and dressed with a baggy, blue-white striped smock. Most of them collapsed under their fate shortly after."

"The head of the admission office was Oberscharführer Stark...This office has prompted the tattooing of prisoners with the prisoner number. I should add here, that only foreign prisoners were tattooed, but not the Germans."

"If Bartel further claims that I had ordered to tattoo the prisoner numbers of the Russians on the left side of the chest, then this is not correct, because I have received this order from Grabner and only passed it on to the department, i.e. the tattooists." 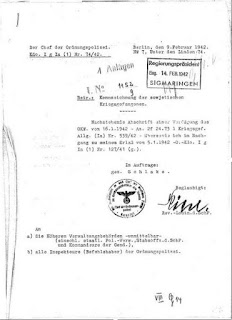 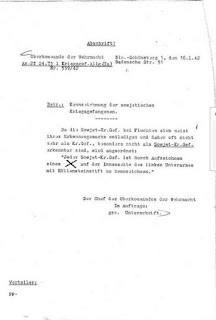 "Any Soviet POW is to be marked by drawing X on the inner side of his left forearm with a silver nitrate stick."

(High Command of the Wehrmacht on 16 January 1942, passed on to the district president of Sigmaringen by the order police, from https://www2.landesarchiv-bw.de, my translation) 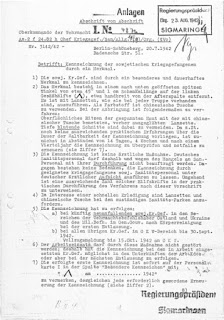 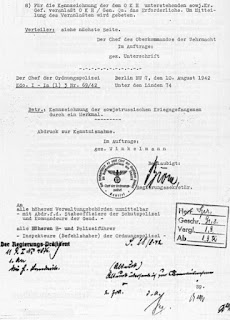 "Soviet POWs are to be marked by a special permanent mark. The mark shall consist of an open sharp angle of about 45 º and 1 cm in length on the left buttock (^), about a hand’s breadth from the cleft between the buttocks. It is to be applied by means of lancets, which are available among all bodies of soldiers. India ink is to be used as dyestuff. Application of the mark is to be performed as follows: superficially scratch the taut skin and wet with India ink, using a lancet previously sterilized by heating. Avoid making cuts that bleed profusely. Since we do not possess sufficient experience of the durability of the mark at the present time, the marks must be examined and redone, if necessary, first, at intervals of 14 days, [then] after 4 weeks and one quarter year"

(High Command of the Wehrmacht on 20 July 1942, passed on to the district president of Sigmaringen by the order police, Carlo Porter's translation of USSR-343, note that although the shown document and USSR-343 pass on the same Wehrmacht order, they are of different provenance, which pulverises Porter's insinuation that USSR-343 is not authentic; another example of how defective Revisionists arguments have to be that they lead to utterly false conclusions)

These two orders by the Wehrmacht High Command were obviously cancelled later on (the marking with silver nitrate was scraped on 27 January 1942), but they show that there had been motives and ideas of crude methods to mark prisoners even among the Wehrmacht High Command, which makes it also plausible how the notoriously corrupted Auschwitz SS could have gone forward to crudely mark their own Jewish and Soviet prisoners.

The following two contemporary Germans reports on escaped Jewish and Soviet Auschwitz prisoners demonstrate that prisoners were tattooed with their prisoner numbers: 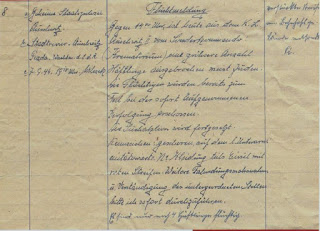 "Today around 14 o'clock, a large number of prisoners escaped from concentration camp Auschwitz II from the Sonderkommando (crematorium), mostly Jews. The prisoners were partly shot during the immediately started chase. The search operation is continued. Characteristics: close-cropped, tattooed number on the left forearm." 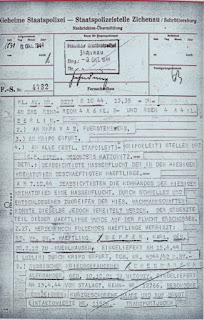