Before I state my opinion about this film, some cautionary remarks about what I consider its weakest part, the presentation of documentary footage about Nazi crimes commented by prosecuting attorney Colonel Tad Lawson (Richard Widmark) after having been sworn in as a witness (1:30:22 to 1:36.07).


Though emotionally compelling, Lawson’s narrative is fraught with inaccuracies, and the footage often does not show what it is purported to show. Besides mentioning homicidal gassing at Dachau concentration camp (which, as far as I know, was not considered proven by a court at any of the Nuremberg trials and neither at other Allied war crimes trials or at later trials before West German criminal courts), the inaccuracies include the following:

1. Lawson announces an "exhibit of by-products of Buchenwald, displayed for the local townspeople by an Allied officer". The subsequent footage does show some such exhibits, but it also shows the following images, which have nothing to do with Buchenwald: 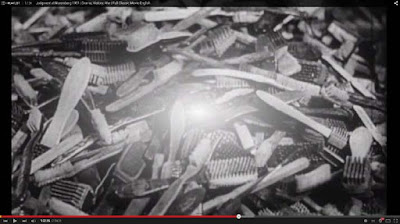 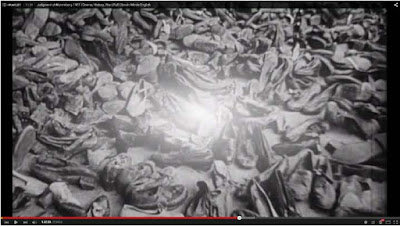 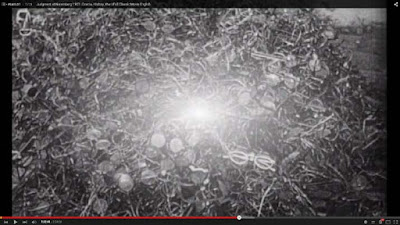 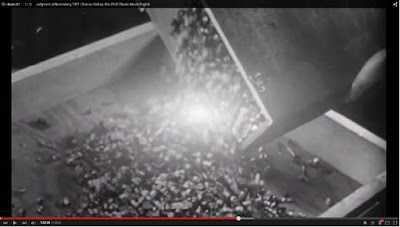 These images are obviously from Soviet footage of the liberation of Majdanek and Auschwitz-Birkenau concentration camps, which was included in the parts of the documentary "The Atrocities committed by German Fascists in the USSR" that are addressed here.

2. The same goes for the images of what Lawson called "children who had been tattooed for eventual extermination" 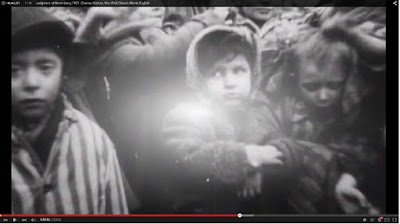 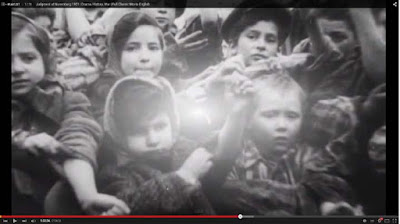 3. Lawson mentions that "death transports" included "90,000 from Slovakia, 65,000 from Greece, 11,000 from France, 90,000 from Holland, 400,000 from Hungary, 250,000 from Poland and Upper Silesia, and 100,000 from Germany". Needless to say, these figures have nothing to do with Buchenwald, which never received any "death transports" because it was a plain concentration camp, which unlike Auschwitz-Birkenau and Majdanek did not also serve an extermination purpose. The figures seem to have been inspired by those that AB commandant Rudolf Höß gave in in his notes headed Die »Endlösung der Judenfrage« im KL Auschwitz, after his pre-trial interrogations in Poland. Höß wrote that he recalled from memory the following numbers of the "larger actions": from Upper Silesia and the Generalgouvernement, 250,000; from Germany and Theresienstadt, 100,000; from Holland, 95,000; from Belgium, 20,000; from France, 110,000; from Greece, 65,000; from Hungary, 400,000; from Slovakia, 90,000.

The sum of these figures, 1,130,000, corresponds to the order of magnitude established by Polish historian Franciszek Piper and rendered in the Van Pelt Report, though some of Höß’s country figures greatly differ from the results of Piper’s research. Piper’s figures, as corrected downwards regarding the Hungarian Jews by the later research finds of German historians Christian Gerlach and Götz Aly, are the current and probably final status of historical research on the death toll of Auschwitz-Birkenau.

The footage shown by Lawson to illustrate the "death transports", from which stills are reproduced below, is not from Auschwitz let alone Buchenwald. 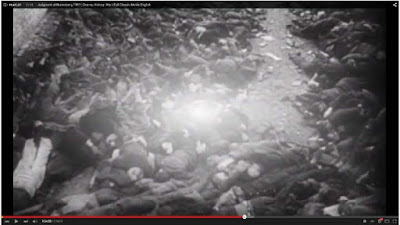 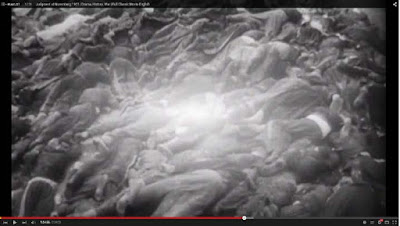 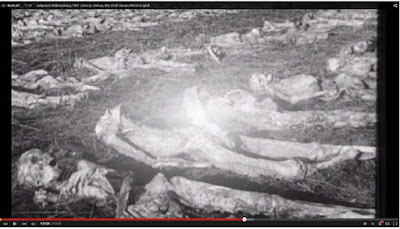 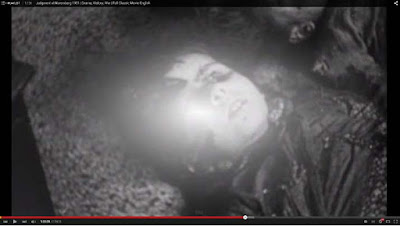 The last of the above pictures obviously shows civilians (not necessarily Jews) killed by German forces on the territory of the USSR, and was taken from Soviet footage such as shown here, here and here.

The exhumed remains visible on the second picture from below seem to be murdered Jewish citizens of Kremenets and Vishnevets, two cities in the Tarnopol region, also shown in stills from the documentary "The Atrocities committed by German Fascists in the USSR" featured in this blog. A German report dated 15.08.1942 mentions the killing of 13,802 Jews in the Kremenets (Kremianez) area (Christian Gerlach, Kalkulierte Morde, p. 715, fn. 1154). These Jews were victims of what the Germans called "local evacuations" (örtliche Aussiedlungen), in the Galicia district of the Generalgouvernement (see the blog Belzec Mass Graves and Archaeology: My Response to Carlo Mattogno (5,2)).

The upper two stills, finally, are from Soviet footage, also included in the documentary "The Atrocities committed by German Fascists in the USSR", showing prisoners of the Sonnenburg prison near Küstrin who had been shot down by their captors in the night of 30 to 31 January 1945. See the blog The Atrocities committed by German-Fascists in the USSR (3) for details.

4. Lawson shows footage from Bergen-Belsen concentration camp in which corpses of inmates are being shoved into mass graves with bulldozers by British soldiers. He then finishes his address as follows: "Who were the bodies? Members of every occupied country of Europe. Two thirds of the Jews of Europe, exterminated. More than 6 million, according to reports from the Nazis’ own figures. But the real figure … no one knows."

Actually there is only one "report from the Nazis’ own figures" mentioning 6 million dead Jews, an affidavit by RSHA official Dr. Wilhelm Hoettl, quoted in Nazi Conspiracy and Aggression Volume 1 Chapter XII - The Persecution of the Jews. Contemporary Nazi documents, like those containing General Governor Frank’s statements cited in the same volume or the Korherr Report, allow for reconstructing a part of but not the whole Jewish death toll from Nazi persecution and mass murder. Thus the main sources for all estimates of that total death toll, including without limitation those mentioned here, have been demographic data from the countries in which Nazi Germany wiped out most or a part of the Jewish population.

Despite these inaccuracies, Judgment at Nuremberg is an excellent historical movie. Its strength lies in its depiction of court procedures, which is in line with actual practice at the trials before the Nuremberg Military Tribunals. A telling incident from the Einsatzgruppen Trial, mentioned here, illustrates the effort that was made to give the defendants a fair trial:


The argument that these trials were "kangaroo courts" or "show trials" is simply not tenable. Both were conducted with scrupulous attention to the rights of the accused to a fair trial. They were allowed to cross-examine the witnesses, challenge documents, and present evidence on their own behalf without limitation.

The attention that the courts gave to allowing the defendants to present a full defense is best illustrated by a famous incident at the trial of the leaders of the Einsatzgruppen. At one point in the trial, the prosecution objected to the argument that one of the defendants had been forced into duty with an Einsatzgruppe. Justice Musmanno, the presiding judge, overruled the objection stating:

After the trial before the U.S. Tribunal, as a token of appreciation of the fair and honest manner in which their clients had been treated, the defense attorneys presented Justice Musmanno with a statue of a penguin. In subsequent trials, it was always the request of the defense that the "penguin rule" be applied. The penguin resided on a shelf behind Justice Musmanno's desk until his death in 1968.


In the sequence from minutes 1:50:31 to 1:54:41 of Judgment at Nuremberg, the defense attorney representing one of the defendants submits a prosecution witness to hostile cross-examination, until the witness breaks down crying. The prosecution council objects that the defense is trying to obtain evidence by pressuring the witness. The judge overrules the objection. The defendant himself interrupts the cross-examination, standing up and saying that he wishes to make a statement. The defense attorney, aware or fearing that his client will make a self-incriminating statement, requests that he be allowed to talk to his client before the statement is made. Prosecution counsel demands that the defendant be allowed to make his statement there and then. The judge adjourns the proceedings.

This wholly realistic sequence further illustrates how misplaced claims of unfair proceedings are as concerns these Nuremberg trials.