Sketches of an Ukrainian Nationalist Imprisoned in Auschwitz Concentration Camp

In 1946, Paladij Osynka published 15 sketches on his time in Auschwitz. According to another former Ukrainian Auschwitz prisoner Stefan Petelycky, Osynka was known as Petro Balij in Auschwitz with the prisoner's number 57321 (Petelycky, Into Auschwitz, for Ukraine; this memoir also reproduces Osynka's sketches).

Osynka explained in the foreword of his booklet:

"The life of prisoners in German concentration camps was too horrible that it might be fully designed in the unpretentious sketches of the author of the album Political Prisoner. It is too improbable that it would be believed by all that who have not survived themselves this inferno. Moreover - this truth was so improbable that it came near to fantasy.

Therefore, the author of this 1st part of the a[l]bum of Political Prisoner, 'Auschwitz', tried, with some exceptions, to settle the problem more from the humorous side than from the tragic one, although such a settlement gives just a true picture of the trageg [sic] of German Concentration camp's prisoner.

The sketches of this life drawn in form of cartoons by the bed-fellows of the author may serve as a reward for those who survived this inferno in the earth. On the other par[t] they may serve for every Ukrainian and for strangers as a document of the fight of Ukrainian people for their highest ideals."

Here are two examples of his sketches: 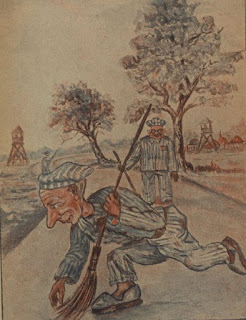 8.) "Straßenreiniger"
The smokers who of you are without sin throw the stone on this 'mussulman' who after one month's abstinence has found this 'tchuk' [a stump of a cigarette] 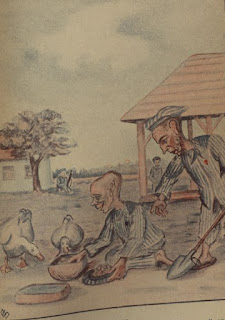 9.) An unexpectedly nutrition
One from the command 'Feldscheune-Babitz' profiting the presence of the human watchmen 'organizes' the additional nutrition.

But he also pictured atrocities in the camp, such as mass extermination: 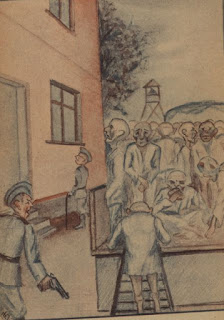 11) Selection for the gas-chamber (fragment) 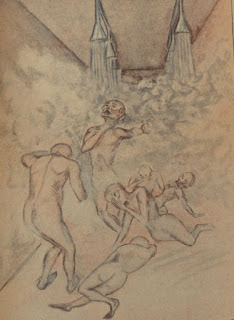 Osynka knew well that the people selected for extermination were killed in homicidal gas chambers. However, as for most Auschwitz prisoners, his knowledge on details of the gassing operation was clearly limited. In actual fact, the gas chambers were packed tightly, and the gas was not injected via shower heads but pellets soaked with hydrogen cyanide were thrown into the gas chamber through openings in the walls or ceiling (see also Rebuttal of Mattogno on Auschwitz, Part 2: Gas Introduction at the Crematoria). The spraying of poison gas through shower heads was one of the most frequent false rumours among prisoners without first-hand knowledge and a reliable connection to eyewitnesses of the extermination sites.
Posted by Hans Metzner at Saturday, June 27, 2015

Email ThisBlogThis!Share to TwitterShare to FacebookShare to Pinterest
Labels: Auschwitz