Recently published contemporary German documents (Bartosik, Martyniak, Setkiewicz, The Beginnings of the Extermination of Jews in KL Auschwitz in the Light of the Source Materials, 2014) hammer another nail in the Revisionist coffin as they support the historical reality of the Bunker 1 and 2 sites in Auschwitz-Birkenau and that their Sonderkommando (special detail) was engaged in body disposal (the historical reality of the Sonderkommando of the crematoria was previously confirmed by a German document).

Bunker 1 and 2 were mass gassing sites in Auschwitz-Birkenau, which were used before the crematoria in Birkenau were taken into operation (Bunker 2 was reactivated for the extermination of the Hungarian Jews in summer 1944). Each Bunker site was equipped with horse stable barracks for undressing of the victims and also with outdoor cremation sites since summer-autumn 1942. The killing was done by the Germans (SS paramedics), the body disposal was carried out by a so-called Jewish Sonderkommando (special detail).

Bunker 1 was mentioned by its proper name (as coined by the Auschwitz SS, e.g. commandant's office, Political Department) in two letters exchanged between the camp administration and the central construction office in March 1944. The camp administration asked to use the power supply leading to "Bunker 1 Birkenau" as control line for sirens since it was no longer needed there (Bunker 1 was apparently not dismantled but kept idle as a back-up in 1943):

Hence, it is requested to provide the cable - 4 x 6 m² [sic] 1 KV - to Bunker I., Birkenau, which is no longer needed, for this purpose to the SS camp administration.

The central construction office agrees to provide the cable 4 x 6 mm², which is released from the provisional supply line to Bunker I, Birkenau, for the control line of the sirens to the SS camp administration on loan.

The term Bunker certainly did not designate a wooden barrack but a more massive structure. Moreover, it was (originally) located somewhat outside the camp infrastructure, since it had to be provided with a long provisional power supply (else the cable would not be suitable as control line for sirens). It was therefore likely one of the former farmhouses shown on the maps of the Birkenau area. Since there was a Bunker I, logically, there had to be a Bunker II.

Another document reveals a set of 3 barracks was located at each Sonderkommando 1 and 2: 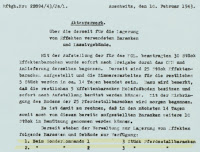 (memo of 10 February 1943, Bartosik et al., p. 135, the document is apparently also cited in Mattogno, Special Treatment in Auschwitz, p. 102, but curiously he only mentions "Sonderkommando I [sic]")

By 10 February 1943, these barracks were assigned for effects storage according to the document at least in the mind of the central construction office. The date is a few weeks before the first crematorium went into operation with its gas chambers and when the Bunker sites were still in operation. This can be explained in such way that either it was considered more important to store the clothes than to provide a shelter for the undressing of the victims or that this assignment was purely formal at the time, e.g. based on the promised completion of crematorium 2 on 31 January 1943.

That these barracks were originally not meant for storing effects (or desinfestation) but for activities related to body disposal is shown by the following document:

For carrying out of a special measure, I have provided 3 barracks from the construction section III of the POW camp some time ago. After the crematoria have been completed for a long time and were handed over to your administration, the above mentioned loaned barracks at special detail I are no longer needed.
...
I have given the order that the barracks at special detail I are to be dismantled and erected in the construction section III.

(letter from the central construction office to the head of the SS garrison administration Möckel of 4 February 1944, Bartosik et al., p. 147)

Sonderkommando 1 was working a with narrow gauge track system for transporting the corpses:

In short, these German documents confirm and corroborate the existence of the Bunker sites and the body disposal activity of the Sonderkommando according to numerous testimonial evidence.

The above cited book published by Bartosik, Martyniak and Setkiewicz roused some Revisionists at the CODOH forum. I will briefly comment on their remarks.

"So 'Hans' and the paid nutters think that chlorinated lime proves their point. I guess the Germans are now accused of bleaching corpses for some unknown reasons. And why would anyone disinfect corpses that were supposedly cremated? Fact: Lime would actually slow up the decomposition of bodies rather than assist in their disposal."

The use of lime or chlorinated lime is a well known practise for treating corpses. The fact that the "Sonderkommando" was supplied with 200 kg of this disinfectant confirms what the previous document already showed (Hannover must have missed that one), that the Sonderkommando was dealing with body disposal. Burying corpses with chlorinated lime is a method of body disposal. At the time (10 February 1943), the Germans were indeed already using outdoor cremations to dispose the corpses and in fact just waiting for the indoor cremations to become available, but outdoor cremations may not have been possible or sufficient at the moment, so that some corpses could not to be cremated, or alternatively a previously emptied mass grave or cremation site in in the Birkenau wood was desinfected.

The Sonderkommando's use of chlorinated lime is, for instance described in a resistance report:

The ventilator [is switched on] and special ‘Sonderkommando[s]’ throw the corpses into two enormous pits, arranging them in layers and covering them with calcium chloride.

"Hans' first two cited documents discussing Bunker 1 come from March 1944. This is a problem because according to official historiography, the Bunker 1 house was no longer needed or used for gassing."

Perhaps Werd should have read the blog posting more carefully since the point was already answered: "Bunker 1 was apparently not dismantled but kept idle as a back-up in 1943". There is no problem that the Germans may have kept Bunker 1 as a back-up facility for about a year. In fact, Bunker 2 was reactivated during summer 1944 precisely because the crematoria were insufficient for the extermination of the Hungarian Jews in Auschwitz.

One more forgot to think before hitting the "post" button.

"He's now justifying his bleach assertion with this calcium chloride example (the stuff you use on ice patches in the winter)! He is one very confused person. None of these things are even caustic for crying out loud. He needs to further explain this lunacy. I could understand some sort of "disinfectant" argument if he were to flesh that out a bit. But then throwing in this calcium chloride example (itself a bit bizarre IMO) to justify that line of reasoning! He needs to explain this kookiness."

Which part of "[t]he Sonderkommando's use of chlorinated lime is for instance described in a resistance report" did blake121666 not understand? I did not say anything about calcium chloride being used. The term "calcium chloride" in the report is most probable a misnomer of the German word "Chlorkalk" (chlorinated lime). The people writing the resistance reports were (usually) not chemists and there was no Wiki and google to check such.