As a contributor to all but one of CODOH’s Inconvenient History volumes, Joseph Bishop has taken on a prominent role with the new revisionist journal, having only been out produced by Editor Richard Widmann and heavy contributor Thomas Kues. Readers might remember Bishop from his abysmal treatment of the shootings of Soviet Jews, succinctly responded to on this blog. While Bishop never made any response to the criticisms despite being made aware of them, we can detect his aversion of the open-air shootings topic in his recent book review of John Mosier’s Deathride.

In this blog, the details and evidence for Mosier’s revisionist-oriented argument regarding the Eastern front in Deathride will not be explored. It should be pointed out, however, that Mosier, who is an English professor at Loyola University, has been heavily criticized for his works by military historians. In a review of Mosier’s The Myth of the Great War and The Blitzkrieg Myth noted scholar Jeremy Black strongly disapproved of his works, pessimistically viewing the popularity of the deeply flawed works as a “triumph of emotion over reason.” Deathride continues Mosier’s authorship of “poor history,” according to military historian Alexander Hill. It might then be appropriate that Bishop declared the work to be “refreshing and pleasantly surprising to revisionists.”

In his article on “The Einsatzgruppen and the Holocaust,” Bishop pointed out that revisionism still has a “long way to go” in addressing the open-air shootings of more than a million Soviet and European Jews. It is thus odd that, in his fairly glowing review of Mosier’s work, that Bishop ignored the issue, despite Mosier’s incorporation of the shootings into his text. Indeed, Mosier understood Hitler through his drive and determination to exterminate the Jews, noting in a footnote (fn 13, page 437-438) that for Hitler “the elimination of European Jewry was hardly an incidental objective: it was a goal.” On page 312, Mosier writes:

So while there is no doubt about the wickedness of the German military and civil apparatus, the chief object of Hitler’s war of extermination in the east was the Jewish population. That campaign allowed Stalin to claim a similar program directed at the Soviet people by the Hitlerites. Thus Hitler folded the Holocaust into a larger war of extermination fueled by racial hatred: Hitler aimed not only to eliminate the Jews, but also the Poles, together with other Slavic peoples as well.

There is no doubting Hitler’s ultimate aim with regard to the Slavs of central Europe. To observe that Stalin had been engaged in his own war of extermination against them, as evinced by the Holodomor and the Great Terror in no way lessens Hitler’s infamy. But neither does the racial nature of Hitler’s savagery differentiate it from Stalin’s murderous acts.

While Mosier writes that “there is no doubting” about the ultimate aim of extermination by the Nazis, he unfortunately is incorrect, as the Joe Bishops of the world DO doubt such an aim.

The mass shootings were also understood by Mosier as an integral part for the establishment of Soviet myths after the war, as described in pages 319 and 320:

However, let us not become too sympathetic to the Slavic peoples of central Europe. There was a dark side to the German liberation, one that helps explain the veil of silence and obfuscation that characterizes this part of the war, and goes a long way toward explaining why Stalin’s mythmaking went unchallenged. Since the bulk of the killings aimed at European Jewry was carried out in the camps, and particularly in the Operation Reinhard camps in the east, it is sometimes assumed that initially the members of the local Jewish community were rounded up and removed from their homes, a process that enabled the Germans to preserve the fiction of relocation and resettlement. Although this process certainly took place, in the occupied territories it was supplemented and even supplanted by other procedures, and those began very early in the war.

Given the imperfect records maintained in Ukraine, Belorussia, and Poland, the death tolls are largely estimates (which is not to say they are not reliable); but in the three Baltic states we have more precise figures: 415,153 Jews were murdered in 1941 alone. Essentially the entire Jewish population was gone by the end of 1941. Taken together with the murders and deportations carried out by the Bolsheviks before the invasion, the population of the Baltic was literally decimated in a few short months.

The same situation was true in Belorussia, where the almost entirely urbanized Jewish population, at least three quarters of a million people, was eliminated. The massacre at Babi Yar, in Kiev (Ukraine), in which about 35,000 local Jews were murdered, is thus unique only in the sheer number of people murdered in a short period of time. As the date of those killings (September 29, 1941) suggests, the extermination campaign was operating early.

There were survivors (the main reason Babi Yar is as well known as it is), but in general these operations were efficient: the number of Jews murdered in the Baltic states during 1941 (415,153) is the same number as the figures reported for the years 1941-1944; the four death camps in the east began operation only in 1942, and the roughly 4.5 million people murdered there had been entirely massacred by the end of that year.

Instead of dealing with these “inconvenient” passages (which are flawed, as seen with Mosier's ignorance of post-1941 Baltic deaths, and an incorrect total of deaths for 1942), Bishop chooses to ignore them. Nowhere in Bishop’s article do the words “Holocaust,” “Jews,” or “shootings” appear. This is surely due to his prior failure on the issue, as described above.

Bishop gleefully points out that Mosier “cites some material from the IHR’s Journal of Historical Review, as well as some of Walter Sanning’s work, both sources heretofore relegated to historiography’s outer margin,” and from that concludes that some historians do read and utilize revisionist arguments. Unfortunately, Bishop oversells the point; Mosier twice cites one article from Sanning on the Soviet Scorched-Earth policy, which was published in the Journal of Historical Review. Thus, there are no citations of the IHR’s Journal “as well as” Sanning, as the two are one in the same, boiled down to one article. Mosier also incorrectly has the publication as the Journal for Historical Review, indicating that he is not as familiar with revisionist publications as Bishop fantasizes.


It is also noteworthy that Bishop’s previous article concerned some “unanswered questions” about the Katyn massacre. Perhaps such a question that Bishop should have discussed concerns two of his Inconvenient History colleagues, Carlo Mattogno and Juergen Graf, who are known to associate with Katyn “denier” Yuri Mukhin. Mukhin denies Soviet responsibility for the shootings. 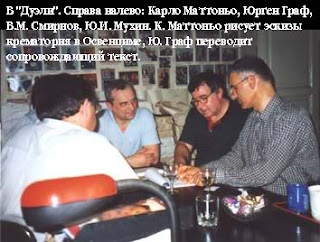 For his attempts at revealing the truth about modern history (as IH's mission statement reads), Bishop certainly ignores a lot of “inconvenient history.”
Posted by Jason Myers at Sunday, January 09, 2011