Given this damning evidence, deniers have to resort to different tricks. Our old good library assistant Jonnie Hargis (AKA Hannover, AKA The Dumbest Person in the World) tries one such trick:

On pages 196-207 they have alleged extracts from an SS court trial in 1943 involving a Max Taubner who was allegedly pardoned even though he was found guilty of allegedly killing Jews. There is no case number given, no reference to the location of the transcripts, nothing....simply text written by who knows who. There is a post at this bbs with claims a case number, but indeed in the book, none exists! I have the book.

The entire book is utter nonsense where unsubstantiations abound. They simply make up absurd claims and can't back up a single one. Read it and see.

Here's a part of a scanned page from the book, giving the source of the Taeubner-related documents: 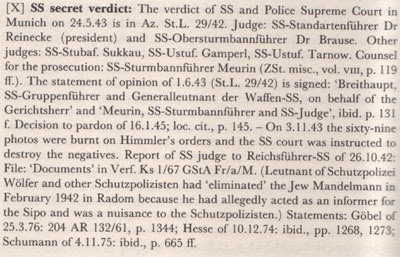 The rest of the book is sourced in a similarly painstaking manner.

Now, do you think Hannover-Hargis is a lying scum or an oligophrenic scum?
Posted by Sergey Romanov at Friday, September 29, 2006