Stephen Tyas, British researcher who discovered the famous Hoefle telegram (you can read his and Peter Witte's article about it in Holocaust and Genocide Studies [1 MB PDF]), has kindly supplied me with copies of two documents dealing with actions of Sonderkommando 1005, which he has discovered in the Public Records Office (Kew, HW 19/238).

The first researcher to refer to these documents in a publication was Robert Hanyok, who received the decodes from Tyas. In his study Eavesdropping on Hell [PDF] Hanyok wrote:

In late 1943, as the Axis forces retreated west all along the front before the resurgent Red Army, the Nazi authorities were faced with the problem of destroying the evidence of the earlier massacres perpetrated by the Einsatzgruppen, police and SS formations. In October 1943 intercepted and decoded radio messages of the SD revealed that the Germans were in the process of exhuming the sites of mass executions and destroying the remains. The texts of the intercepted messages were written in the obtuse language that the Germans used for all matters pertaining to the Holocaust. These messages indicated that such work, executed by Sonderkommandos (Special Detachments), and included cleaning up "special places of work" in the Baltic region southwest of Leningrad, near the cities of Novgorod and Pskov. Interestingly, in trying to identify the murder sites, SS officials had to rely on information from Latvian and Russian collaborators.

Even though these documents don't mention the number "1005", still, they help to debunk - once again - the crazy claim made by the deniers that SK1005 was nothing but a figment of imagination, a Soviet or Allied invention. Moreover, they elucidate the method which Blobel and his men used to find the graves, thus also debunking deniers' argument, that they would have to have an extensive set of maps, etc.

One of these decodes is also interesting in that it may yet haunt a certain still living Russian émigré who collaborated with the Nazis.

What follows is a transcription of the decodes (it seems only the translations exist) with comments based on research by Stephen Tyas (and my small contribution). 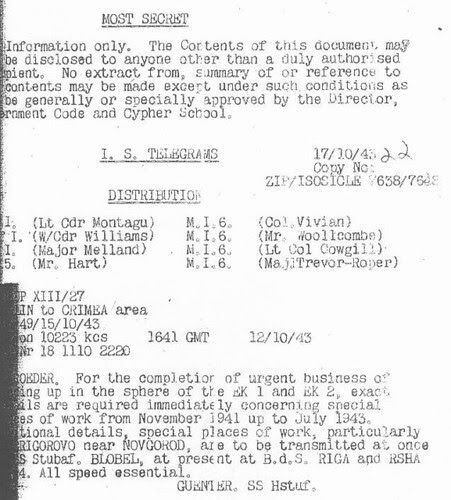 [...]
GROUP XIII/27
BERLIN to CRIMEA area
[...] 1641 GMT 12/10/43 [...]
For ROEDER1. For the completion of urgent business of
winding up in the sphere of the EK 1 and EK 2, exact
details are required immediately concerning special
places of work from November 1941 up to July 1943.
Positional details, special places of work, particularly
in GRIGOROVO2 near NOVGOROD, are to be transmitted
at once to SS Stubaf. BLOBEL, at present B.d.S. RIGA
and RSHA 4 B 4. All speed essential.
GUENTER. SS Hstuf.

1. SS-Sturmbannfuehrer Dr Rudolf Oebsger-Roeder (b. 09.03.1912), at time of the decodes was the Unternehmen Zeppelin field commander in the Crimea on behalf of RSHA VI C Z. (S. Tyas)

2. Grigorovo was a posyolok (settlement) near Novgorod, now it is within the city's border. According to information from Dr. Boris Kovalyov of Novgorod State University, in Grigorovo there was an HQ of the Spanish Blue Division and a camp for Soviet POWs. To RSHA IV B 4. Secondly. BdS. RIGA SS Stubaf.
BLOBEL. Ref. W/T1 message of 11/10 Nr. 18.
1) In Ravine near air-force barracks of SIEVERKAJA2
close to the north-west of the airfield,
little material. 2) GATTSCHINA3 castle grounds
about 200 m. distant from the former quarters of
the Kdo. Ostuf. BOSSE4, former Latvian interpreters
TONE, DZELSKELEJS5, and others, all apparently
["from" crossed out by hand] RIGA, are able to give information concerning
1) and 2). Russian collaborator, RUTSCHENKO6 [correction by hand], can
also give indications, at present PSKOV UZ[?]7.
3) Ref. PUSCHKIN, ZARSKOJE, SELO8 and TOSSNO9.
Please question Stubaf. Dr. ? ["?" crossed out by hand, and handwritten name "FRANCZ"10 inserted] and Stubaf. HUBIG,
both RSHA I b.

[...] Part 2. 4) GRIGOROWO
at NOVGOROD not known to me. As EK 2 [is concerned],
perhaps Ostubaf. EHRLINGER11 of Egr. N can give
information, or else Hstuf. KRAUS (brother of Stubaf.
OTTO KRAUS), who is at present at PSKOV.
Sgd. ROEDER, Stubaf.

3. Gatchina/Krasnogvardejsk can be seen on Stahlecker's famous map. The map lists 3600 Jews as dead, but this probably applies to the number of the Jews shot in whole oblast. According to the Soviet Extraordinary Commission, in Gatchina 100 people were shot, 762 - hanged, 3,508 - died after torture. While one should always be critical about EC numbers, it seems there were enough criminal traces in the town to cover up.

5. Bruno Tone and Lt. Dzelzkalejs both noted in 1941/42 with Latvian SD and in January of 1943 with "Sonderkommando Latgale" on the Latvian/Belorussian border in Unternehmen Winterzauber: Tone was Company Commander and Dzelzkalejs Deputy Company Commander (S. Tyas). Interrogation of Tone by Smersh is available here. [Link no longer works, but there's much info about Tone in Russian if you google for "Тоне Бруно" and "Бруно Тоне".] According to it, he served as a translator to Stahlecker's deputy in October of 1941. He was also a commander of the 4th company of Latvian SS battalion, which guarderd concentration camp in Salaspils. Later he also was in Jagdverband-Ost.

6. In 1970s Zhores Medvedev claimed that a certain Nikolaj Nikolajevich Rutych-Rutchenko was "NKVD investigator in Riga in 1941, then Gestapo investigator in Berlin in 1942". However, according to other sources, during the war he was in the "third force" movement, fighting against Soviets and Germans in the forests of Pskov and Novgorod, and was arrested by the Germans only in 1944. Allegedly, he spent time in Sachsenhausen, Flossenbuerg and Dachau as an inmate.

V. Baidalakov, a long-time chairman of NTS, wrote in his memoir, published in Moscow in 2002:

S.P. Rozhdestvenskij from Novoje Slovo calls. He sends a man from Gatchina to me. I open the door when he rings - a brunet in his 30s, smart appearance, intellectual, lieutenant of SD. Arrived from the Russian detachment in SD forces. He presents himself - Nikolaj Nikolajevich Rutchenko-Rutych. Tells his biography: graduate student of history faculty, student of academician Grekov; when the war broke out, decided to go over to the Germans; in order to accomplish this he joined a unit of Soviet parachutists that was being formed then, in such a way got into the German rear, joined SD forces, in the front-line zone got to know people from NSNP and joined it. Although his bio was obviously too smooth and "lacquered", he was welcomed by us in Berlin - we'll see. Later it became known that one young lady knew him in 1940-1941 in Riga, when he wore NKVD uniform. Now this dame is married, happy, emigrated with her husband to Canada and does not want to resurrect passions of her youth.

I met him in Gatchina, occupied by the Germans, where he was far from being a driver or a kitchen boy. And this meeting almost cost me my life.

Coupled with these testimonies about Rutchenko serving the Nazis and being in Gatchina, the conclusion is inescapable that it is the same "RUTSCHENKO" mentioned in the decode.

After the war Rutchenko was a constant author in émigré journals. He published many historical treatises (you can search the Library of Congress catalogue for "Rutych"). Currently he peacefully resides in Asnieres, France, and doesn't even hide his address and phone number.

[There has been an avalanche of materials about Rutych-Rutchenko since this article was published, including a whole film exposing his past, a scholarly article in Rodina and this item.]

8. The town of Pushkin was also called Tsarskoje Selo. But Tsarskoje Selo is also a magnificient palace/park/museum ensemble in Pushkin. Dr. Ilja Altman informs that in autumn of 1941 800 Jews of Pushkin were led into the cellars of Yekaterininksky palace. They were being shot in groups in the park itself.

10. Possibly a coding error or a part was missed in transmission. Research shows this may refer to SS-Sturmbannfuehrer Kurt Graaf who was with EK 1c and Teilkommandofuehrer Krasnogwardeisk August-November 1942, and previously with RSHA I. (S. Tyas).