News From The Death Factory 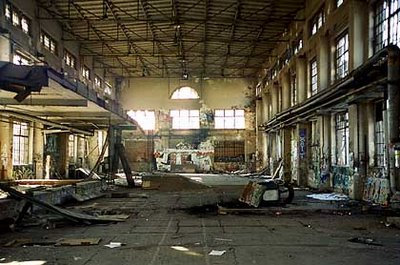 Anyone acquainted with punk rock will be well aware of the role played by Nazism and the concentration camps in providing shock value and confronting the complacency of late 1970s Britain. Quite apart from The Sex Pistol's historically ignorant but symbolically powerful 'Belsen Was A Gas', the leading exponents of such imagery were undoubtedly the founding fathers of industrial music, Throbbing Gristle. With tracks such as 'Zyklon B Zombie' and the slogan 'Music from the Death Factory' emblazoned on their debut album 'Second Annual Report', not to mention haute couture camouflage uniforms, Throbbing Gristle used Nazi imagery to provoke and confound, all while adopting the style and modus operandi of a business corporation. Because of the controversies they caused, they share with Holocaust denier Germar Rudolf the honour of a mention in Hansard, the parliamentary records of the British House of Commons, in which they were described as 'wreckers of civilisation', later the title of an excellent biography by Simon Ford.

A news story from Spiegel's online English edition would probably leave Genesis P.Orridge tickled pink. It turns out that the Topf und Soehne factory in Erfurt, abandoned after the bankruptcy of the East German successor firm in 1994, has become a punk squat. The 'Topf Squat' is not only a well-known venue for punk gigs, but also houses informational displays drawing attention to the history of the site, located a short walk outside the Erfurt city centre in an industrial park. The squatters, in residence since 2001, have also produced a virtual tour of the factory, highlighting the involvement of Topf und Soehne in the construction of the crematoria at Auschwitz, the use of forced labour by the company, the knowledge of 'ordinary' employees of the extermination process, as well as related subjects such as the role of the Reichsbahn and antisemitism.

Moves are afoot to transform the site into a permanent home for a travelling exhibition
on Topf und Soehne which was organised by the staff of the Buchenwald concentration camp memorial and which has been displayed in several German cities to considerable acclaim. Though the local Land, Thurinigia, has decided not to contribute the necessary funds, the city authorities in Erfurt have been prompted by the exhibition to begin planning the renovation of at least part of the industrial site. The squatters, meanwhile, are being encouraged to come up with plans for what they themselves would like to do with the site.
Posted by Nicholas Terry at Thursday, March 30, 2006

Email ThisBlogThis!Share to TwitterShare to FacebookShare to Pinterest
Labels: Topf