According to a recent article Das Ungelesene lesen by the Russian historian Pavel Polian, 90% of the contemporary handwritten letter of the Sonderkommando prisoner Marcel Nadjari has been deciphered "through the use of multispectral images". Previously, the amount of readable text was limited to about 10%.


In the blog posting The Contemporary Sonderkommando Handwritings on Mass Extermination in Auschwitz-Birkenau the following choppy description of the extermination was quoted from what has been previously readable and published by the Auschwitz State Museum from Nadjari's letter:


In the now extended decipherment, it reads far more detailed as follows: 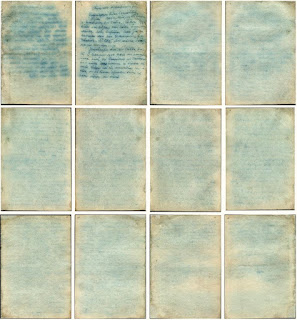 After a 10 days journey we arrived in Auschwitz on 11 April, where we were brought to the camp Birkenau. We stayed about one month in quarantine and then they moved the healthy and strong. Where? Where, dear Misko? To a crematorium, I will explain to you further below the nice work the Almighty wanted us to do. It is a big building with a wide chimney and 15 ovens. Below a garden there are two big endless rooms in the basement. The one serves for undressing and the other is the death chamber, where the people enter naked and after filled with about 3000 people, it is closed and they gas them, where they gave up the ghost after 6 to 7 minutes of martyrdom. Our work consisted, first of all, to receive them, most did not know the reason...collapsed or cried told them that...it is a bath...went unsuspectingly into the death.

Until today...I told, that everyone...I told them that I don't understand their language they are talking with me, and to the people, men and women, I saw their fate was sealed, I told the truth. After...all naked, they went further into the death chamber, inside the Germans had installed pipes at the ceiling...so they believe they prepare the bath, with whips in their hand the Germans forced them to stand closer that as many as possible fit inside, a true sardine can of people, then they hermetically closed the door. The gas tins always came with the car of the German Red Cross with two SS men. These are the gassing people, who poured the gas into openings.

After half an hour we opened the doors and our work begun. We carried the corpses of these innocent women and children to the elevator, which brought them to the room with the ovens, and they pushed them into the ovens, where they burnt without the addition of fuel by their own fat. One human yielded only about a half Okka [~ 640 g] ash, which the Germans forced us to crush to press it through a rough sieve, which a car picked up and poured it into the river Vistula, which is flowing nearby, to remove all traces.

The drama seen by my eyes cannot be described. About 600,000 Jews from Hungary passed by my eyes, - French - , Poles from Lodz, about 80,000, and most recently about 10,000 Jews from Theresienstadt from Czech Slovakia arrived. Today there was a transport from Theresienstadt, but thank God they did not bring them to us, they kept them in the camp, it was said that the order was given, that no more Jews should be killed, and it is apparently true, so they have now changed their minds at the last moment - now that there is not a single Jew left in Europe, but for us the matter is different, we must to vanish from the earth because we know so much about the inconceivable methods of their mistreatment and retaliation.


Our detail is called Sonderkommando, special commando, it consisted of 1000 people, thereof 200 Greeks, the rest Poles and Hungarians, and after heroic resistance, because they wanted to remove 800, as all hundreds outside the camp and the other others inside.

The manuscript was found on 24 October 1980 buried on the ground of crematorium 3 in Auschwitz-Birkenau. As pointed out by Polian, the account, which refers to the Sonderkommando revolt of 7 October 1944 and the liberation of Greece, was apparently written between mid-October and 26 November 1944, before the final partial Sonderkommando liquidation (which Nadjari survived, he died in 1971).

The manuscript is a reliable description of the mass murder in Auschwitz, including the layout of the crematoria 2 and 3, the killing procedure and the body disposal.

Most remarkable is his estimation of 1,4 Million Jews killed in Auschwitz within four years - Nadjari himself arrived in the camp only in April 1944. The figure - just some 100,000s above what is known from today's sources and much lower than the 4 Million obtained by the Soviets after the war - suggests that some of the Sonderkommando prisoners were well informed on deportation/extermination data over the time and also passed on that knowledge to later Sonderkommando prisoners.