Evidence on the systematic falsification of death causes in Auschwitz

The remaining records of the so-called Auschwitz death books contain 68,864 death entries issued by the Political Department (camp Gestapo) between 29 July 1941 and 31 December 1943. The vast majority of these deaths were due to “natural deaths”, exceptions are for instance 107 executions listed for 1941 and 206 deaths due to accident, shot on escape or suicide.


It is important to note that these records refer only to registered prisoners in the camp, while most people murdered in Auschwitz were taken to the extermination sites directly from the transport ramp without being registered in the camp.

Still, the small proportion of killings and the fact that almost all deaths were due to some sort of disease stands in contrast what is known mostly from testimonial evidence about extensive atrocities carried out also among registered prisoners. There were reportedly many small and large scale killings by hanging, shooting, phenol injection, beating to death and homicidal gassing for instance. This apparent contradiction is resolved when looking into what the people who were involved in ordering, compiling or issuing the death records or had some sort of access to these matters testified about their origin.

To give a specific example, Janusz Poganowski aka Skrzetuski died of "sudden cardiac attack" according to the death book entry (a remarkable cause of death for a 23 years old by the way), but he was hanged  according to the cross-examination of Tadeusz Paczula of 8 May 1964 at the Frankfurt Auschwitz trial:

"A prisoner called Skrzetuski, Janusz, prisoner number 153, pushed away the stool with his own feet."

Many other examples, which are established from a mix of documentary and testimonial evidence from the prisoner clerk Tadeusz Paczula, can be found in the publication "Death Books from Auschwitz".

But the falsification of death causes is also corroborated and confirmed by relying strictly on documentary evidence. The prisoners Abram Warszawski, Alex Farkas and Hans Redlich all died of “sudden cardiac attack” according to the death books, whereas they were “shot on escape” according to entries in the guard leader book. In case of Farkas there is also a report from Auschwitz to the SS court in Breslau confirming he was shot on escape. 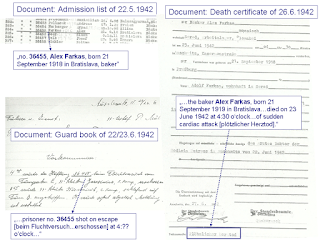 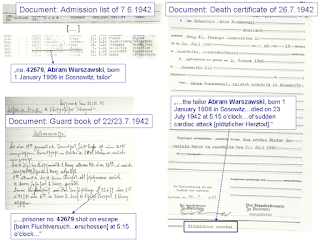 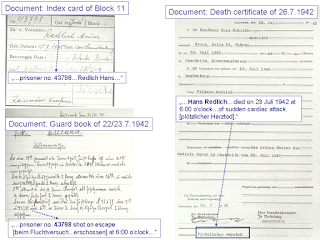 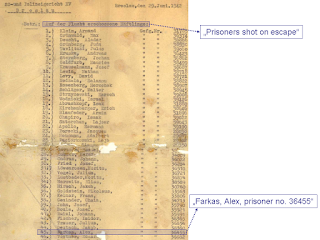