About 7000 SS men and auxiliary women were serving in the Auschwitz concentration camp complex, some with relatives nearby, external authorities were in contact and corresponding with the Auschwitz camp, hundreds of thousands of people were deported to the site and a certain number of civilian workers had access to the camps. Not too far away were villages as well as the town of Auschwitz. In short, there were many people involved in and around the Auschwitz complex.

Now, suppose the Revisionist view on Auschwitz, i.e. the falseness of homicidal gassings, is true. Then this mass of people with different backgrounds, abilities and personalities should generate substantial testimonial evidence to support. Yet, only very few accounts are known – three come to my mind, Wilhelm Stäglich[1], Thies Christophersen[2] and Walter Schreiber[3], none of them can be classified as actual eyewitness against homicidal gassings and none is without substantial problems. Is this really it?


A large and easy accessible source of testimonies on Auschwitz concentration camp is the first Frankfurt Auschwitz trial, which took place in the years 1963 – 1965, but investigations and interrogations go back to 1958. The testimonies of more than 400 witnesses were heard or read out (excluding expert reports) during the trial. The testimonies were published in 2005 by the Fritz Bauer Institute and the Auschwitz State Museum as DVD (Digitale Bibliothek 101 - Der Auschwitz-Prozeß), which allows for convenient full text search in the transcripts and interrogation protocols. The DVD was screened specifically for testimonies on homicidal gassings in Auschwitz. 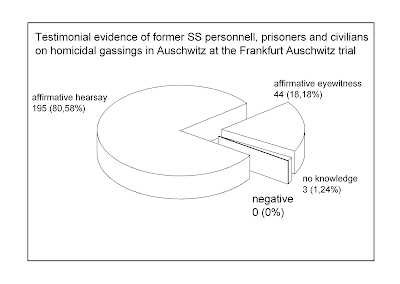 
Due to their indirect nature, the hearsay testimonies are less reliable individually but powerful as bulk and from a statistical point of view. It is also reasonable to make the distinction between hearsay testimonies from SS personnel and prisoners. SS men were often in a more suitable position to obtain reliable hearsay information about German atrocities, either officially as part of their duty or unofficially from other SS men.

40 former members of the SS testified about homicidal gassings in Auschwitz (supposedly) from hearsay source, including high positioned officers such as the commander of Security Police and SD in Kattowitz Johannes Thümmler, Auschwitz commandant Richard Baer, Auschwitz adjutants Karl Höcker and Robert Mulka, SS investigator Helmut Bartsch, SS doctors Victor Capesius, Franz Lucas, Willi Schatz and Willy Frank. It is improbable that all these people were not in the position to obtain reliable knowledge on whether homicidal gassings were carried out in the Auschwitz. The breakdown of all 64 testimonies from SS personnel is shown in figure 2. 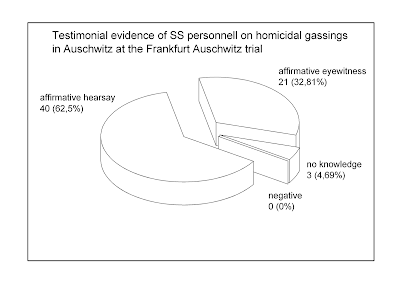 [1] Stäglich wrote that he did not see “cremation ovens” in Auschwitz, which indicates that he never was in Birkenau, where the mass gassings took place. It also suggests that he was unable to obtain reliable hearsay information about Birkenau. Curiously, he wrote that the Topf double-muffle oven shown in Dachau reminded him of the ovens in the bakery in Auschwitz. See letter of Stäglich in Christophersen, Die Auschwitz-Lüge, p. 68 ff.

[2] Christophersen did not know there were four crematoria in Birkenau either, even though he is supposed to have visited the camp. He was only told there was “a crematorium…in Auschwitz”. He did not know anything about open air cremations in Birkenau, even though these were carried out in Auschwitz in summer 1944 according to aerial and Sonderkommando ground photographs. Therefore, either Christophersen was a poor observer and not much talented to obtain reliable hearsay information about Birkenau or suffered from severe memory fading at the time he wrote down his account. See Christophersen, Die Auschwitz-Lüge.

[3] Schreiber was supposed to be chief engineer of Huta since November 1943, but the crematoria in Auschwitz were already finished at this time. Schreiber’s opinion that homicidal gas chambers in the crematoria are unlikely is based on false assumptions with respect to the technical prerequisites of homicidal gassings. There are, in fact not many and in principle any room, where people can be locked in, can serve as a homicidal gas chamber for mass murder. See testimony of Schreiber of 1999, http://www.vho.org/VffG/2000/1/Rademacher104f.html.
Posted by Hans Metzner at Sunday, January 01, 2012