"Only 17% of Hungarians Believe the 'Holocaust' Happened, 21% in Poland"

Would you believe this headline? I mean that Holocaust denial - one of the world's least appealing and alluring conspiracy theories - gained such a momentum in Hungary and Poland (two countries that saw a large part of its Jewish population systematically mass exterminated by the Nazis during the Second World War) that only a small minority still believe the Holocaust happened? Seriously?

The statement is indeed a lie. The figure below shows the actual result of the survey (data taken from "ADL Global100"):


Now the shocking news to all Holocaust deniers (especially to Nicholas "the International Red Cross...visited Auschwitz regularly throughout the war to checkout its hygiene standards" Kollerstrom aka "astro", who considered the lying article published at "Russian Insider" apparently so exciting that he shared it on a heavily censored "Revisionist" internet forum):

Here's the next disillusioning piece of free information for "Revisionists" we have compiled from the results of the ADL Global100 survey:  it does not look much better for them in the rest of the world. 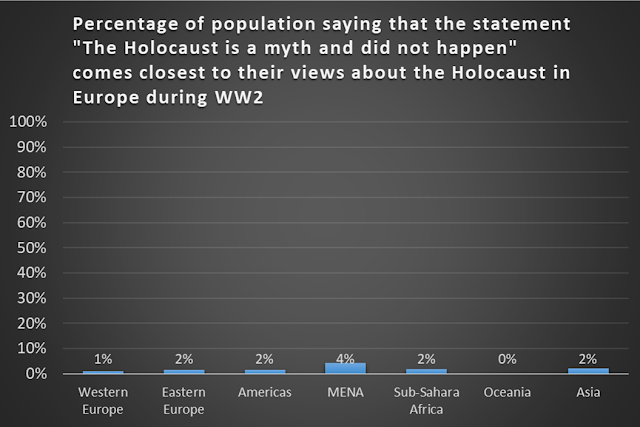 (note that I would take the results of the survey with a pinch of salt as it might have been discriminatory towards people who did not know the term "Holocaust"; it would have been more meaningful for determining the actual spread of Holocaust denial if the term was also explained, most preferable with a range of death toll)
Posted by Hans Metzner at Tuesday, January 07, 2020