Hans Gewecke and the Jews of Lithuania

Below I present two documents written by Hans Gewecke, Gebietskommissar in Schaulen, Lithuania, on September 3 and September 10, 1941. The first describes how he refused to implement an order from Jaeger, transmitted to him verbally by Hamann, to kill all the Jews in the city. This document appears to show Gewecke in a favourable light. The second document, however, shows Gewecke's complicity in the murder of Jews across his region. On August 13, his boss Lohse had drafted directives which included the statement that "The countryside is to be cleansed of Jews." The September 10 document shows Gewecke pursuing that objective vigorously, such that all areas are "almost free of Jews" except for essential labourers in the city of Schaulen itself, in addition to implementing executions for sabotage and savage reprisal measures. Moreover, Gewecke reveals that young Lithuanians are being trained so that they can eventually replace the Jews, whom he hints can then be killed. This hardly makes Gewecke a protector of those Jews. 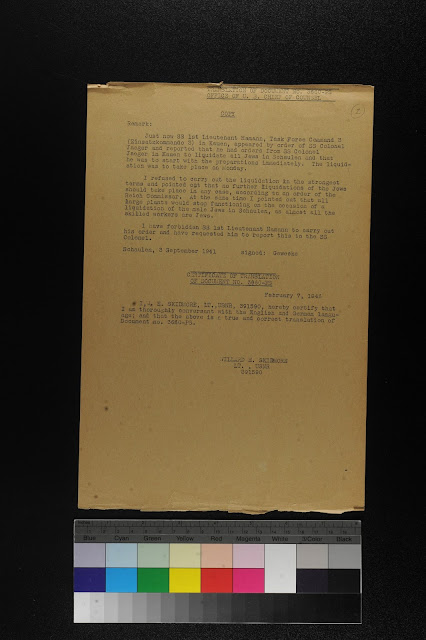 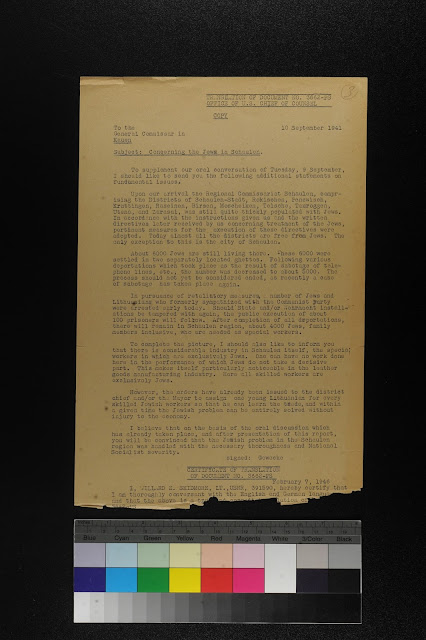 Gewecke was brought to trial in the 1960s but portrayed himself as being benign to the Jews, a pose he maintained when interviewed by Lanzmann in 1979. A careful reading of the interview reveals his true character. For example, on page 51, he says that he could have reached a deal that would have killed thousands of ghetto Jews and produced "a few thousand gluttons less (after all, I also had to take care of that)." His most uncomfortable moment in the interview is when discussing the Kinderaktion of November 5, 1943, when the ghetto's children were removed and murdered. Gewecke denies he had any forewarning.

Perhaps the most telling fact about Gewecke is exposed in Stahlecker's report of 15.10.41 (reproduced in the Ulm trial) which revealed that, in the Schaulen district, 41,382 Jews had been murdered as of that date. Gewecke claimed in his Lanzmann interview that all these deaths were prior to his arrival, yet he admits that he arrived on July 10, 1941, spent four weeks touring his district and received reports from his local chiefs. Gewecke was complicit because he was the official face of his district at that point in the escalation of killing. He only protested when his work Jews were due to be killed, and his letter of September 10, 1941, seems to be approve of the fact that only 4,000 Jews are left in his district, which in all areas except the ghetto is almost free of Jews. Finally, his prevention of the work Jews being killed is only meant to be temporary, until the Lithuanians have been trained to the point where they can replace them. Gewecke therefore supports total extermination as the end goal.