The gas chamber survival stories seem to appear more often in the press lately. All such stories are a priori improbable, and thus require stronger evidence to accept them than an uncorroborated testimony.

If it is claimed that the people were driven into some sort of a room, and simply left there, with a survivor speculating that the Nazis were out of gas or the chamber malfunctioned, then the people would have probably been gassed in another gas chamber or on the next day, not simply sent to work (especially in the light of the fact that it was, as a rule, Jews unable to work who were selected for the gas chambers).

If the story is that the people were driven into a room and the gas was let in, but some person survived and was left alive, this is an even less probable variation. While certain accounts tell of a few individuals barely surviving the gassings, they were inevitably killed by the Nazis afterwards.

The origin of the stories is not hard to explain. Confused, frightened people who had probably heard certain rumors are crowded into a shower room and expect the worst. Maybe something happens:  they're left there for the night or the water doesn't come from the showers and they interpret it as surviving a gas chamber - or somebody misinforms them afterwards that they had been in a gas chamber. And they believe it. It's an honestly misinterpreted experience. These people are not liars despite the fact that their testimony is not accurate.

Sometimes false memory must be at play - like in the case of the stories where the gas was let in (sometimes in a way which we know was not actually used). Research shows that false memories are relatively easily constructed. It is no wonder that it would happen to some survivors under conditions of stress and uncertainty. Memories of the actual unpleasant experiences in unfamiliar shower rooms would combine in their heads with extraneous information (rumors, nightmares) to create memories of failed gassings, sometimes pretty vivid ones (if demonstrably inaccurate).

(This, by the way, is different from the testimonies of  inmates who actually worked in the gas chambers. The unreliable witnesses we're discussing testify about momentous, one-off events. Whereas the actual witnesses from the Sonderkommando had to work there for months, in some cases years, and the chances of misinterpretation were nil.)

Unfortunately journalists who print these stories are mostly doing it uncritically (self-selection might be at work - if you publish an old survivor's story, you usually don't do it to criticize it, so the articles that do get written and/or published are uncritical). Case in point is the latest such piece published on Oct. 4 on an Australian news site: "Miracle that saved girl from Auschwitz gas chamber":


Yvonne’s hair was shaved and she was forced to strip naked.
Yet Despite Mengele’s decision, Yvonne was ushered into what appeared to be a gas chamber, a simple room filled with what appeared to be shower heads.
“We were forced to strip, our hair was shaven and then — to this day I’m still not really sure what was happened.
“I had no idea what it was — I was in such a state of shock, I didn’t think anything. I was shaking with fear so much so that I was too afraid to even cry.”
Locked in the room in darkness with naked strangers all around her, they waited. Afraid.
Nothing happened.
“The gas chamber must have malfunctioned,” she reasons.
“In the morning we were marched out and then put to work.”

There is of course nothing in this story to suggest it was a gas chamber rather than a normal shower room. Yvonne Engelmann is an honest but confused witness. Yet the author, Paul Ewart, simply accepts her interpretation without question. Certainly not what a responsible journalist (or a historian) should do.

But this time something interesting happened: the Auschwitz Museum factchecked the article on the spot, on Twitter! 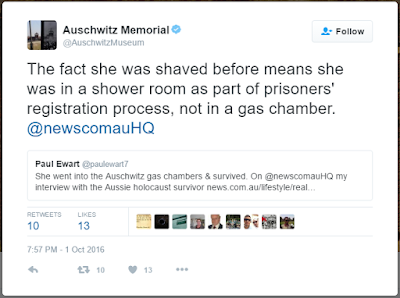 And to his credit, Paul Ewart (or his editor) included this tweet in the article (although the text remained unchanged).

If more such factchecking by authoritative institutions is forthcoming in the future, Holocaust deniers, who, like parasites, cling onto such stories, will have no ground to stand on.