Having established the gassing film's provenance we shall now take a look at the issue of where the film was shot.

It is usually claimed that the scene depicts a gassing in Mogilev. However there were also some testimonies about similar early gassings elsewhere (Minsk), so we should make sure that we have the right location. In order to do this we should examine photos of the Mogilev psychiatric hospital, specifically of the location where the gassing is claimed to have taken place. 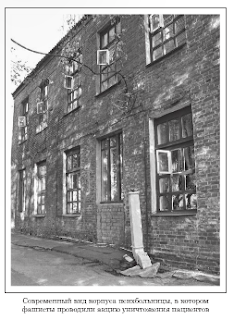 The caption reads: "The modern view of the building of the psychiatric hospital in which the fascists carried out an action of extermination of the patients."

Based on several indications* we decided that the window on the right is the most likely candidate for the exact location shown in the film. We then prepared two images for a comparison. One from the photo above: 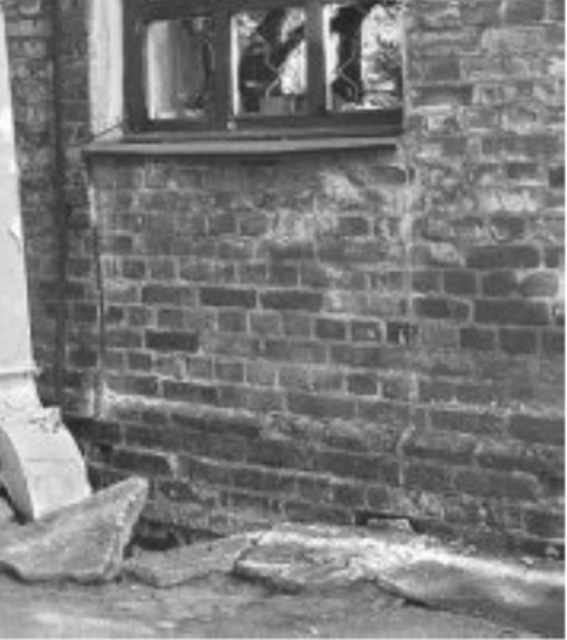 And one from the film: 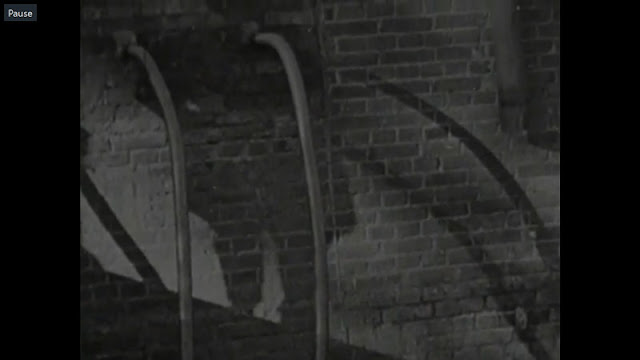 Note however that the photos were taken from different angles. Therefore we "unskewed" them with the Perspective Crop tool and then overlaid them on top of each other (which required some stretching). The unskewing wasn't quite perfect due to the quality of the images, but it's enough for an analysis. By controlling the opacity of one of the images we could then create a series of images where one photo "blends" into another, allowing for a direct visual comparison. We also marked several areas on the photos with the more obvious coincidences. 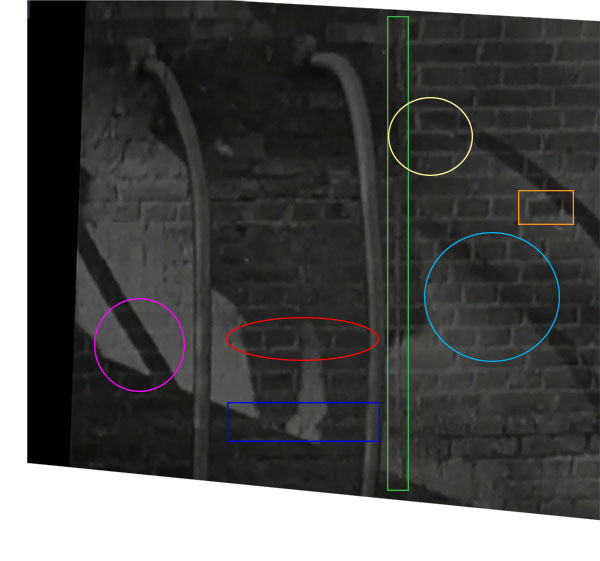 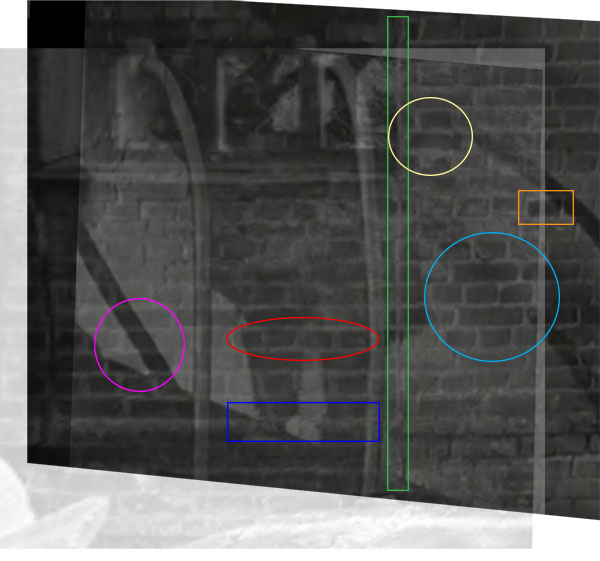 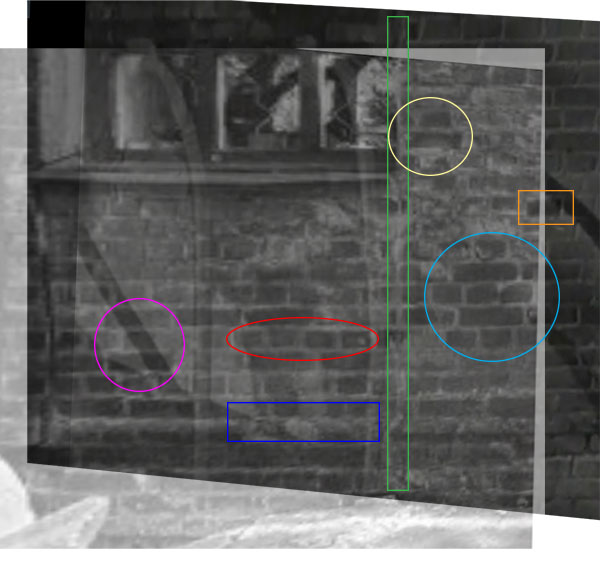 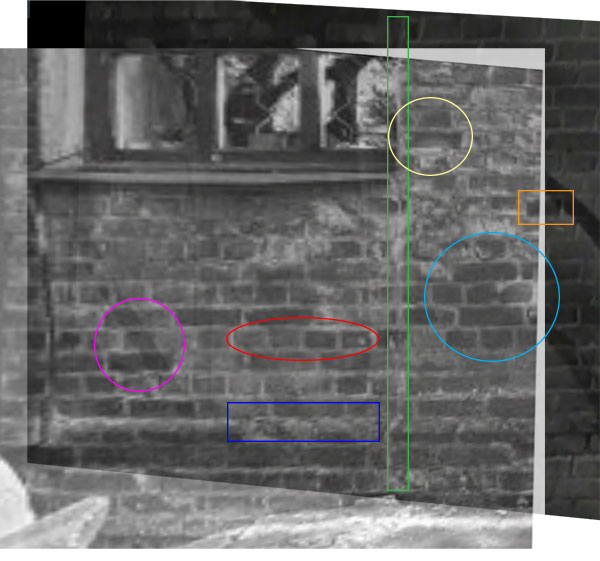 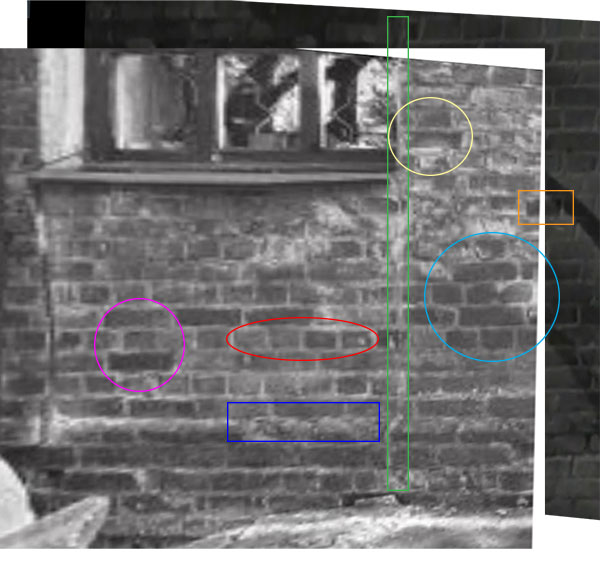 Here is a video that we prepared based on these images.

We're satisfied that the photos depict one and the same wall. It's not about the brickwork pattern as such, which is pretty standard. It's about the unique features.

The areas marked on the images (the "straight line" (green rectangle) which on the first photo logically continues upwards - because that's where the window used to be; the clearly visible extruding lower part of the wall on one image and the human shadow distorted by these extruding bricks on the other image (blue rectangle); the brick of different color (orange rectangle)) as well as  the positions of the matching areas in relation to each other (the extruding part to the straight line, the straight line to the dark brick, etc. etc.) cannot be explained away as a coincidence due to the same brickwork pattern. Moreover, the parallel rows of long and short bricks do not perfectly align with each other on both photos - and the alignment "defects" are same in both images (cf. especially the large blue circle on the right, with the upper long brick shifted slightly to the left compared to the lower long brick).

Our conclusion is therefore that the footage was, indeed, shot at the Mogilev psychiatric hospital.

-------
* Note: A short explanation of the "heuristic" thinking here: witnesses Stepanov (the chief physician at the Mogilev psychiatric hospital from Aug.1941 to Jan. 1942) and Pugach (also a psychiatrist there) testified in 1944 that the bandaging room was converted by Prieb into a gas chamber (see Istoriya..., op. cit, ss. 193ff.). That is, a specific room is known to have been a gas chamber, and it should be one of the rooms whose windows are shown on the modern b/w photo above. There are two windows with "straight lines" under them, matching the footage. An article here shows the current state of the gas chamber. Based on the form of the window grating on the photo of the inside of the room we could exclude one of the two windows and thus propose, hypothetically, that the remaining one is the window. Further analysis in this article confirmed this.