In his recent book Bunt Sonderkommando, the Polish historian Igor Bartosik has published a new German document on the 7th October 1944 Jewish Sonderkommando revolt in Auschwitz-Birkenau (document no. 2 in the list below). This event is well known from testimonies from after the liberation of the camp, but there is also a substantial number of contemporary sources available:
These documents are too troublesome for Holocaust Revisionism as they a) heavily corroborate  the testimonial evidence and b) raise the question why the most secured detail in Auschwitz-Birkenau (see also Auschwitz Labour Force Reports as Evidence of Sinister Activity at the Crematoria) attempted a mass escape during daylight inevitable resulting into deaths among the prisoners if there was no immediate threat to them. Just don't hold your breath for Revisionists to explain this. They haven't even offered yet any sound explanation why there were up to 903 prisoners employed at the crematoria - mostly idle according to their own hypothesis - in summer 1944 to begin with. 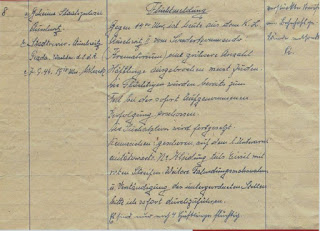 Today around 14 o'clock, a large number of prisoners escaped from concentration camp Auschwitz II from the Sonderkommando (crematorium), mostly Jews. The prisoners were partly shot during the immediately started chase. The search operation is continued. Characteristics: close-cropped, tattooed number on the left forearm. Clothes partly civil with red stripes. Further manhunt measures and communication to the lower offices is requested. There are only four prisoners on escape left."

2. Telex from concentration camp Auschwitz to the RSHA and police stations of 8th October 1944 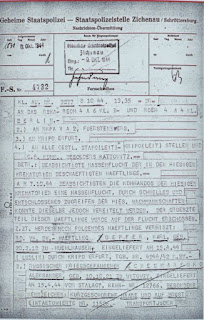 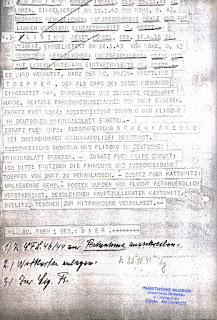 "Re: Intended mass escape of the prisoners employed in the local crematoria.

(First page from Bartosik, Bunt Sonderkommando, p. 34, second page from here; my translation. The telex mentions four escaped prisoners, which matches to the previous document and supports that it was written on 7 October 1944)

(Transcription inferred from 3 October 1944 male labour force report and Czech, Kalendarium, p. 898, 902, 903; Heizer = stoker, Tag = day, Nacht = night. Note that the data was obviously not updated the first day after the revolt and that crematorium 4 [III in the document's counting] was not manned anymore by 10 October 1944)

4. Secret message from the camp resistance of 9th October 1944 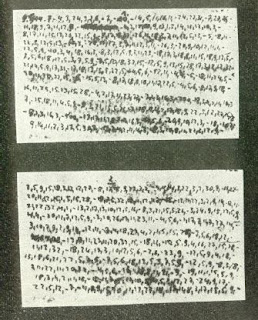 "9 October 1944. On Saturday the 7th, the Sonderkommando employed for the gassing and burning was supposed to be gassed. It did not came to the gassing, because the desperate prisoners, when they saw the unavoidable death in front of their eyes, threw themselves on the SS, killed six of them and forced their way through the chain of guards. About 200 were shot during the escape, about 500 have rescued themselves. One of the crematoria was set to fire. The overflying air planes due the air raid on Silesia made the persecution more difficult. At the moment, the SS is publicly threatening with bloody revenge on the prisoners, as they consider it an outrageous crime that the unfortunate prisoners did not allow to let themselves gassed. Berlin was informed about the matter in a special report [...]"

(Inmitten des grauenvollen Verbrechens, p. 182, my translation from the German translation provided in the book)

1. On performing their duty, the following died faithfully in accordance with their oath on the Führer on Saturday, 7 October 1944:

We will always remain true to the memory of the dead comrades."

6. Undated list from a Sonderkommando prisoner of the exterminated people in Auschwitz-Birkenau

"But on the next day, i.e. on Saturday morning, 7 October 1944, we learnt that a transport with these 300 people from crematorium IV-V should leave. For the last time, we reinforced our positions and informed the people we had contact with how they should behave under the various circumstances. When it was 1:25 pm and they came to get those 300 people, they showed great courage as they did not want to move. They rose with a load cry and threw themselves with hammers and axes on the guards, wounded some of them, beat the others with what they could get and threw stones on them. One can easily imagine, what was the result of this. Moments later a whole battalion of SS arrived armed with machine guns and grenades. There were so many, that there were at least two machine guns against each prisoner. Such an army they mobilised against them. As our people saw that they were lost, they wanted to set fire to crematorium IV and to die in action, in the hail of bullets at this place. And so the whole crematorium ended up in smoke. When our detail at crematoria II-III saw the flames from the distance and heard the shooting, it was convinced that nobody was alive from this detail."