The mosquito aircraft targeting the Buna area in the late morning of 25 August 1944 had at least two vertical (but slightly shifted) cameras still on when passing over the nearby Auschwitz-Birkenau site. The cameras were taking pictures every few seconds. Given the height & speed of the aircraft and the comparable short interval time, the frames of each camera are largely overlapping and objects on the ground were captured three times by each camera. With image processing programs, animated gif files can be created revealing the movement of groups of people or single vehicles, which took place within those few seconds.

The following overview picture of 25 August 1944 shows the various locations with significant movement of vehicles or groups of people in Auschwitz-Birkenau: 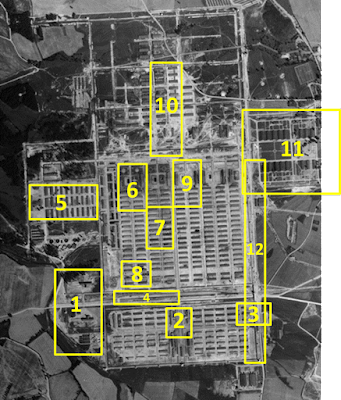 Image number 2 (camp section BIa-b). Shows a long formation of people crossing the road between camp section BIa and BIb. Another formation is lined up and entering the delousing facility on the right side.

Image number 4 (Birkenau ramp). Some traffic on both sides of ramp.

Image number 5 ("Kanada"). A vehicle is moving between the two barracks in the North-East corner of Kanada. Much telling is a comparison of the 23 August and 25 August 1944 photographs of this section. It indicates the piles of effects dumped infront of the barracks, as can be also seen on ground photos from the so called Auschwitz Album.

Image number 8 (camp section BIIe). Prisoners lining up between the barracks on the left side.

By the way, the aerial photographs taken two days earlier, on 23 August 1944, show a long formation of people walking on the road between crematoria 4 and 5. The formation is about 160 m long, probably several hundreds of people from one of the Lodz transports arriving these days. Their destination is crematoria 5 or the central sauna, depending on if the people have been selected as fit or unfit for labour at the ramp.

Another interesting fact is that activity and work was going on at the Bunker 2 site between 23 and 25 August 1944. Structures and discolorations have changed within the pentagon shaped extermination site as well as between the two undressing barracks.