… is reduced to making a fuss about an error in Table 8.41 of the HC critique, which corresponds to Table 5.5 in the blog Mattogno, Graf & Kues on Aktion Reinhard(t) Cremation (4).

The error in Table 8.39 (5.3), which repeated itself in the subsequent tables, is an Excel formulae error. In order to obtain the wood equivalent weight in kg, I divided the first value in the column "BTU", the one for the coal, by the BTU/kg value for the sleepers (16,671) in the column "BTU/kg". I then forgot to "freeze" the denominator, i.e. the 16,671 BTU/kg, before copying the formula to the cells below. As a result, all subsequent values in the column "BTU" were divided by the wrong denominator, the BTU value for wood being divided by the sum of values in the "BTU/kg" column. An occasional mistake, nothing more. Shit happens.

Now, what sad sack Jansson forgets to tell his readers, as he rambles about my "profound incompetence – or dishonesty – or both", etc., is that this error is unfavorable to my argument, for it leads to a total wood equivalent value in the column "Wood equivalent kg" that is higher than the value resulting from a correct calculation. The correct values (which represent the weight of wood or wood equivalent per ton of carcass, see p. 506 of the critique and the aforementioned blog) are the following:

The corrected tables are reproduced below (the column “Residue Factor” has been omitted).They can be enlarged by clicking on them. 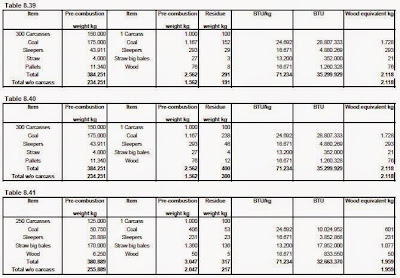 So I have to thank Jansson not only for kindly pointing out this Excel formulae error and allowing me to correct it, but also for dealing himself a glorious shot in the foot and (once again) making a fool of himself.

If Jansson can point out further such errors in any other of the 45 tables in Chapter 8 of the critique, his further contribution to improving my response to the corresponding parts of MGK’s magnum opus will be much appreciated.

If not, his babbling about my oh-so-"frequent" errors is just more Janssonian hot air.


It can at least be used for an educated guess, which is all I have to provide as long as Jansson – who, as the challenger of generally accepted historical facts and related evidence, bears the burden of proof for the "impossibility" claims that would substantiate his challenge – cannot at least demonstrate a significant margin of error.


Muehlenkamp cannot find even a single example in the scholarly literature on bodily weight in which the standard (or non-standard, as in Muehlenkamp’s “Gewichtstabelle nach BMI”) BMI ranges were used to derive an estimate for a population’s average BMI. No-one works that way, because that’s not what this kind of a table is for.


Highly irrelevant arguments, as long as Jansson cannot show a) how "one works" when determining a population’s average weight (I hope for him that he doesn’t take as model his coreligionist Mattogno, who suggested that adult Polish ghetto Jews in 1942 weighed 70 kg on average) and b) demonstrate that there is a significant difference between my assumptions and the results of how "one works".


Jansson’s answer to the above?

Regurgitation of his contentions in the blog here commented, otherwise deafening silence.
Posted by Roberto Muehlenkamp at Wednesday, May 27, 2015