… which I last asked him in this blog.

Actually I’m not sure if his latest blog contains an answer to my question about the amount of gasoline used on the Dresden Altmarkt pyres, or rather an attempt to avoid providing an answer.


The answer is quite simple. I believe that the source base for the Dresden pyres is inadequate for a technical analysis. The procedures used, steps taken, and the final result are all in doubt.


Come on Jansson, cut the crap.

The procedures are described in some detail by the sources quoted in Chapter 8 of the HC critique and in the blog Mattogno, Graf & Kues on Aktion Reinhard(t) Cremation (2).

There are photographs of pyres while and before burning, including without limitation the one shown in the aforementioned publications and the ones shown in the blog Friedrich Jansson changes the subject and again below: 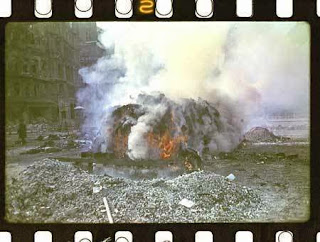 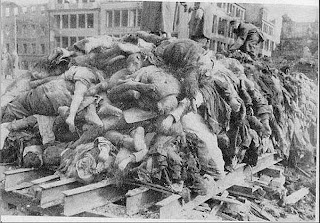 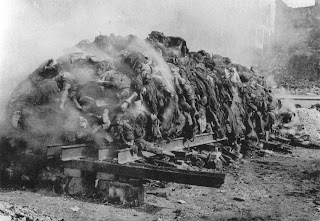 And there are at least two documents, identified in the postscript of the blog last mentioned, whereby the results of the cremation were what the authors of these documents called "ash" or "ashes", obviously meaning the small bone fragments one sees in the foreground of the color picture above, the one that shows the burning pyre.

So Jansson’s reasons for refraining from what he calls a "technical analysis" (a nice term to impress gullible fellow "Revisionists", isn’t it?) can hardly be a lack of data.

If Jansson considers the source base for these data "inadequate", he will have to explain what standards of evidence he is applying, and demonstrate that these are the same standards he applies when accepting as fact historical events he professes no "doubt" about.


After all, what sources, exactly, support Muehlenkamp’s contentions that gasoline was the predominant fuel?

The sources I quoted and their sources, as far as I know. The gasoline detail seems to bother Jansson a lot, judging by his calling into question that gasoline was the predominant fuel.

Besides, what other than gasoline is supposed to have been used as the main combustion agent in burning the corpses on the Altmarkt pyres?

Is Jansson trying to tell us that the little wood one sees below the pyres on the above pictures would have been sufficient to burn the corpses?

If so, all further discussions about fuel requirements at the AR camps are unnecessary.

a) give an idea about the kind and quantities of whatever additional flammables he has in mind, and

b) point out any source mentioning a different type of flammables used in addition to the wood below the pyre?

If Jansson can answer questions a) and b), then I’m all ears.

If he can answer only question a), I’ll also be interested.


In spite of these complications, which undermine any attempt to use the Dresden pyres as a source for the study of mass cremation, one can easily show that Muehlenkamp’s suppositions about the fueling are false. If his claims about the amount of gasoline used were true, and this amount was used on the pyre pictured, then given the estimates which have been made for their dimensions simple arithmetic shows that there should have been a puddle of gasoline around a foot deep covering the entire area of the pyre. Obviously there was not. The notion of refueling mid-burn is ruled out by gasoline’s explosiveness. Thus, Muehlenkamp’s beliefs are readily refuted by a simple back-of-the-envelope calculation. How is it that in the years he’s been spamming his nonsense on this matter that he never managed to work this through himself?

Now that Jansson is through with his rhetorical bluster, he is invited to

a) provide his puddle "arithmetic" (I hope for him that he didn’t understand my considerations in the sense of 68,000 liters being poured over a single pyre, which is what his writing about an amount "used on the pyre pictured" suggests, as opposed to this being the total amount used on a number of pyres set up over the period between 21 February and 5 March 1945), and

b) explain what makes him think that the pre-ignition pictures shown above, or any other of his choice, were taken after the gasoline (or whatever alternative fuel Jansson has in mind) had been poured onto or otherwise placed on the corpses.

To finish, it's interesting to see, once again, that the burning of air raid victims on the Dresden Altmarkt with little wood and with gasoline, even assuming the comparatively modest (by the standards of "Revisionist" contentions about fuel requirements for the AR pyres) amounts of gasoline that I calculated, presents a big problem for "Revisionist" charlatans, one that Jansson tries to talks his way out of by lamely squealing about the source base being "inadequate", and by his glorious "puddle" arithmetic.

Jansson has already produced three "Muehlenkamp" posts in a row this week, by the way. Let’s see how many more will follow before the week is over.
Posted by Roberto Muehlenkamp at Thursday, May 28, 2015