The final part of the last of these posts is transcribed below.

As concerns autopsies performed by the Soviets on people killed in gas vans, I have the following information transcribed here (emphases added):


Morning Session, 17 December, 1943.
Findings of the Commission of Medico-legal Experts:
[...]
n the 13 grave-pits opened in Kharkov and its immediate vicinity were found a huge number of corpses. In most graves they lay in extreme disorder, fantastically intertwined, forming tangles of human bodies defying description. The corpses lay in such a manner that they can be said to have been dumped or heaped but not buried in common graves. In two pits in the Sokolniki forest park bodies were found lying in straight rows, face downward, arms bent at the elbow and hands pressed to faces or necks. All the bodies had bullet wounds through the heads. Such a position of the bodies was not accidental. It proves that the victims were forced to lie down face downward and were shot in that position. In the grave pits where the bodies lay and in places where the bodies had been burnt the medico-legal experts found articles of everyday use and personal effects, such as bags, sacks, knives, pots, mugs, spectacles, fasteners of women’s handbags, etc. The fact revealed by the investigation namely, that before being murdered Soviet citizens were stripped of their footwear, is fully confirmed by the medico-legal examinations: during exhumation the experts in most cases discovered naked or half-naked bodies.

In order to ascertain which Soviet citizens were exterminated and in what manner, the experts exhumed and examined 1,047 bodies in Kharkov and its environs. These included the bodies of 19 children and adolescents, 429 women and 599 men. The dead ranged in age from two to 70 years. The fact that the bodies of children, adolescents, women and old men as well as invalids were discovered in grave-pits with civilian clothes and articles of domestic use and personal effects on the bodies or near them, proves that the German fascist authorities exterminated Soviet citizens regardless of sex or age. On the other hand, the fact that [on] the bodies of young and middle-age men were found clothes of military cut worn in the Red Army, also articles of military equipment (pots, mugs, belts, etc.) is evidence of Soviet war prisoners.

The extermination of Soviet people (civilians and war prisoners) was effected by means of poisoning with carbon monoxide, shooting, burning, and killing with blunt, hard and heavy instruments. All this has been established absolutely and irrefutably, by the material of the preliminary investigation, the Court proceedings, and proved by the medico-legal experts with scientific objectivity.

The depositions of the accused and the witnesses state that in various parts of the temporarily occupied territory of the U.S.S.R. the German fascist invaders used specially equipped large vans in the bodies of which Soviet citizens were murdered by exhaust gases containing carbon monoxide. The medico-legal experts proved this beyond doubt for the first time when examining bodies exhumed in the town of Krasnodar and in its vicinity. At the same time the presence of carbon monoxide was irrefutably established by a combination of physiological, chemical and spectroscopic tests of the blood in the tissues and organs of the corpses. The same method of poisoning with carbon monoxide as was used in Krasnodar has been proved by medico-legal examination of some of the bodies exhumed in Kharkov.

The lorry which came to be known as the gas van or murder van, designed to exterminate people inside its air-tight body by means of exhaust gases, must be regarded as a mechanical method for the simultaneous poisoning of large groups of people.

Investigation and medico-legal examinations has established that in addition to [b]poisoning with carbon monoxide[/b], the Germans applied on a large scale, in Kharkov and its environs, mass shooting from automatic firearms, firing as a rule into the back of the head, the back of the neck and the spine. [...] 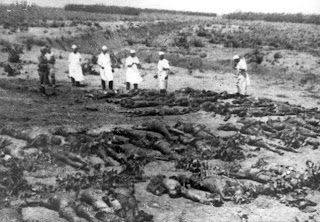 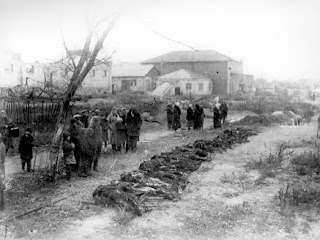 This additional photo, which I didn't include in the aforementioned collection, is captioned "Krasnodar, USSR, Bodies of children gassed to death with carbon monoxide, after the liberation": 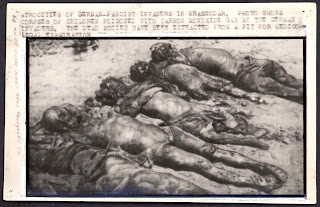 I'm sure you're eager to dismiss this evidence as having been manipulated by the Soviets for propaganda purposes. So let's have a look at some evidence regarding the use of gas vans in the Krasnodar region that the Soviets couldn't possibly have manipulated. The following is my translation of an excerpt from the Munich Court of Assizes' judgment against members of Einsatzkommando 10a dated 14 July 1942 (you'll find a trial summary here under "Jeissk"), which I expect to have been essentially based on testimonies provided to this West German court or to other West German criminal justice authorities by the trial's defendants and other eyewitnesses to these killings. The excerpt, which is quoted on pp. 102-104 of Kogon, Langbein, Rückerl et al (editors), Nationalsozialistische Massentötungen durch Giftgas, is about the murder of handicapped children from an asylum at Jeissk (Eysk), a town by the Sea of Azov 247 km away from Krasnodar: 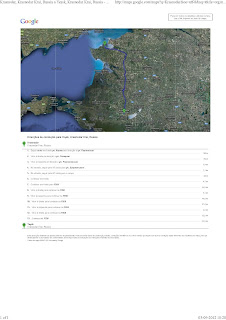 After the capture of the city of Krasnodar by German troops on 9.8.1942, Einsatzkommando 10a followed into this city. To the city of Jeissk (Eysk) on the eastern shore of the Sea of Azov, which also had been captured on 9.8.1942, a partial detachment commanded by the defendant Trimborn was sent. On 8.10.1942 this partial detachment received a delegation from Krasnodar including the defendant Dr. Görz. This delegation brought the >gas van< and the order to kill the children of the asylum located in area Shtsherbinovskaya-Barikadnaya-Budyenny Street. This children’s asylum was located by the city and had several buildings. In the buildings of the central complex there were moronic and imbecilic children, in the building at the corner of Shtsherbinovskaya and Gogol Street there were physically handicapped and also healthy children, in the building at Budyenny Streret there were bedridden sick children (suffering from hydrocephaly). The children were aged between about three and about seventeen years.
The >gas van< or – as the Russians called it – the >soul killer< was a large box van. On the outside walls mock windows had been painted, at the back there was a double door sealing the box construction. The box structure was lined inside with white sheet metal and had grates lying on the floor. With the help of a hose the motor exhaust could be introduced into the box structure from below.
To execute the order brought from Krasnodar, the mentioned delegation together with members of the partial detachment based in Jeissk went to the mentioned children’s asylum on 9 October 1942 around 16 or 17 hours in the afternoon. The gas van was first driven into the yard of the building at the corner of Shtsherbinovskaya and Gogol Street. Thereafter the building was surrounded by several men and secured against an eventual escape of the children.
The head of the asylum’s education department, Galina Kotshubinskaya, and the children were told that the children were to be taken to Krasnodar for medical treatment. The headmistress, who – like the children – knew from newspapers that the Germans killed people with the >soul killer< – objected to the uploading of the children, but without success.
The children were rounded up in the yard. Smaller children and such who could not move without assistance were carried out of the building. Nurses from the asylum also helped in doing this, with tears in their eyes. When, however, some of the children resisted, started screaming and tried to run away, they were caught, hit or grabbed by their arms and legs, carried to the van and thrown into the same. Two men dragged Volodya Goncharov, a thirteen-year-old pioneer, out of the building to the van, by his legs and with his head down.
The crying and screaming children eventually also lay on top of each other in the gas van's box structure. When the box was full, the double door was closed, and the van took off. In their death panic, caused already by the constriction and seclusion of the room they were in, the children screamed and banged on the walls of the box. After some time the carbon monoxide introduced into the box with the exhaust showed its first effects. At least some of the children had severe feelings of choking. Their heart beat faster and they felt nausea, buzzing in their eyes, pounding in their temples and pain in the forehead and temple areas. As the poisoning progressed they felt sickness and urge to vomit, until they were assailed by cramps, vomited, urinated, defecated and finally died from brain paralysis due to lack of oxygen.
The children did not all die at the same time. While some of them already showed severe symptoms of poisoning, others witnessed the death struggle with its cramps, vomiting, urination and defecation while still relatively conscious, which considerably increased their death panic and their torments.
The dead children, intertwined due to their death struggle, were finally unloaded into an anti-tank ditch near the city. Thereafter, still on the same day, the bedridden sick children from the building at Budyenny Street were taken to the gas van and poisoned. 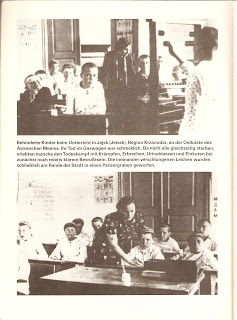 One of the children, shown below in a photo from the same collection, was named Misha: 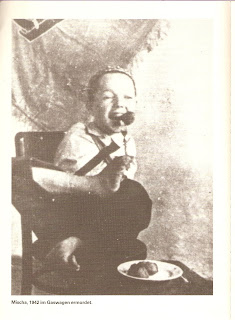 These children were what Nazis like Fredo would call "Untermenschen" (subhumans), in two respects: they were handicapped, and they were racially inferior Slavs.