The present blog is about the extermination of the Jewish population in the Lithuanian countryside in 1941. Like in the previous blogs of this series, the information presented in this blog is mostly based on German historian Wolfram Wette’s biography of Karl Jäger (Wolfram Wette, Karl Jäger. Mörder der litauischen Juden, S. Fischer Verlag, Frankfurt am Main 2011, hereinafter "Wette, Jäger").

Some of the largest of these extermination operations took place in the small town of Rokiskis. There all Jews, men, women and children, were shot in August 1941. The name Rokiskis appears twice in the Jäger Report, on page 2:


The killings between June 27 and 14 August 1941 were probably carried out by Lithuanian nationalists on their own initiative with the consent of Einsatzkommando 3. The large massacre on 15 and 16 August, on the other hand, was a carefully planned and executed operation, which wiped out all Jews and other undesirables still alive in Rokiskis at that time. Jäger pointed out this operation as an example of EK 3’s modus operandi in rural Lithuania, as follows:


The implementation of such activities is primarily a question of organization. The decision to systematically make every district free of Jews necessitated an exhaustive preparation of each individual operation and reconnaissance of the prevailing circumstances in the applicable district. The Jews had to be assembled at one or several locations. Depending on the number, a place for the required pits had to be found and the pits dug. The marching route from the assembly place to the pits amounted on average to 4 to 5 kilometers. The Jews were transported to the place of execution in detachments of 500, at intervals of at least 2 kilometers. The attendant difficulties and nerve-wracking activity occasioned in doing this are shown in a randomly selected example: In Rokiskis, 3,208 people had to be transported 4.5 kilometers before they could be liquidated. To accomplish this task in 24 hours, more than 60 of the 80 available Lithuanian partisans had to be allocated for transportation and cordoning off duty. The remainder of them, who had to be constantly replaced, carried out the work together with my men. Motor vehicles are only occasionally available. Attempts to escape, which took place every now and then, were prevented exclusively by my men at the risk of their lives.


The unit in charge of this operation, called the Rollkommando Hamann (Hamann mobile detachment), was commanded by SS-Obersturmführer Joachim Hamann, who at the time was 28 years old. Hamann was known as a fanatical Jew-hater and extremely ambitious. The term "mobile detachment" was due to the unit’s motor park, which allowed the unit to operate throughout Lithuania from its basis in Kaunas. In commanding the mobile detachment Hamann gained the reputation of being Jäger’s "overeager bloodhound". His unbound energy in wiping out Lithuania’s rural Jews satisfied both his radical anti-Semitism and his career expectations. 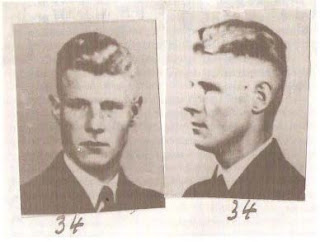 With little personnel of his own at his disposal, Hamann had the murders in rural Lithuania carried out mainly through local auxiliaries. The radically anti-Semitic auxiliary policemen who did his dirty work he referred to as "partisans". They carried a white armband and were therefore also called "white bands" (Weiβbänder). These radical nationalists were formed into paramilitary units called "auxiliary policemen" (Hilfspolizisten). In Kaunas a battalion of these auxiliary policemen, with a strength of 1,755 men, was put together in early July 1941. From this battalion Hamann recruited the local members of his mobile detachment, including a lieutenant by the name of Bronius Norkus, who had been an officer in the Lithuanian army and became Hamann’s energetic and unscrupulous assistant in murdering the Jews of rural Lithuania.

In carrying out the Rokiskis massacre, Hamann’s detachment worked in close cooperation with the Lithuanian community administration and the local Lithuanian uniformed police. One day before the start of the large Rokiskis massacre the local police was informed that a mass shooting of Jews was to take place. Members of the local police force were to take part in the shooting only if they volunteered for this task, otherwise they were to perform the necessary guard duties. On 16 August the former "’partisans", now acting as policemen, collected 500 Jews in Rokiskis and marched them to the site of the killing, a nearby forest. Undressing the victims was one of the tasks of the local Lithuanian police, who received a daily allowance and free food in return for this service. The further proceeding was described as follows by historian Knut Stang ("Kollaboration und Völkermord. Das Rollkommando Hamann und die Vernichtung der litauischen Juden." In: Paul, Gerhard/Klaus-Michael Mallmann (editors): Die Gestapo im Zweiten Weltkrieg. >Heimatfront< und besetztes Europa. Darmstadt 2000. Quoted in Wette, Jäger, p. 106; my translation):


The Jews had to take of their clothes; those who refused were […] beaten with a stick. In groups of 30 to 40 persons they then entered one of the pits and lay on the ground or on the previous victims. Then shots were fired from the pit's longitudinal rims. Victims who were only wounded were murdered by the Germans with aimed shots. Nevertheless some heavily wounded were still alive when the next group lay down in the pit.


On the next day the shootings in Rokiskis continued. As usual the murdering marksmen had unlimited quantities of vodka at their disposal, which led to their usually being completely drunk after the shootings.

Jäger expressed his recognition for Hamann’s achievements in his report:


The goal of making Lithuania free of Jews could only be attained through the deployment of a raiding commando with selected men under the leadership of SS First Lieutenant Hamann, who completely and entirely adopted my goals and understood the importance of ensuring the co-operation of the Lithuanian partisans and the competent civilian positions.


Jäger’s enthusiasm for the results of Hamann’s work was not shared by the civilian administration of Nazi-occupied Lithuania, which had to deal with the sanitation problems posed by the large numbers of huge mass graves throughout the Lithuanian countryside. Some of the correspondence regarding the management of these mass graves has been recovered, including a letter dated 8 July 1942 sent by the District Medical Officer of Trakai to the Regional Commissioner Vilna Land, in response to the Regional Commissioner’s inquiry about mass graves in the respective region and the measures taken to prevent public health risks. The letter mentions mass graves at several killing sites recorded in the Jäger Report: Trakai (1,446 Jews killed on 30.9.1941, thereof 366 men, 483 women, 597 children - page 6), Semeliškes (962 Jews killed on 6.10.1941, thereof 213 men, 359 women and 390 children - page 6), Rumsiskis and Ziezmariai (784 Jews killed on 29 August 1941, thereof 20 men, 567 women and 197 children - page 3) and Kaišiadorys (1,911 Jewish men, women and children shot on 26 August 1941 - page 3).

The mass murder of the Jews in Semeliškės was mentioned in a report dated 27 August 1944 from the Soviet Extraordinary State Commission, which is partially transcribed in the Yad Vashem Archives and was kindly brought to my attention, together with the aforementioned letter, by a fellow researcher who posts as "maximusolson". Note that the Soviet report, in keeping with the Soviet government policy addressed in Part 1 of this series, didn't mention that the victims were Jews but referred to them as "innocent citizens".

The Vilna Gaon State Jewish Museum in Vilnius features a Holocaust Atlas of Lithuania, with the names of every location in the country where Jews were murdered and information about the dates and particulars of the killings, the numbers of victims and the precise location of each killing site.

Much further information about the mass killings in the Lithuanian province, which were mostly or even exclusively carried out by Lithuanian collaborators, can be found in the article HOLOCAUST IN LITHUANIAN PROVINCE IN 1941, by Lithuanian historian Dr. Arūnas Bubnys. This article will be addressed in more detail in a future blog series.

Next part:
The Jäger Report (4)

Note, 13.03.2013: As pointed out by my fellow blogger Jonathan Harrison, some of the photos linked to at the end of this article seem to pertain not to mass killings in 1941 but to the liquidation of the Kaunas concentration camp in 1944, which is addressed in Part 7 of this series. See the note after that article.

Update, 23.04.2018: Broken links to photos from the Yad Vashem online archives were replaced by the current last paragraph. The note of 13.03.2013 has thus become irrelevant. Additionally a typo ("Lithuanian" instead of "Lithunian") and another mistake (the mass killings at Trakai and Semeliškes were not carried out by men from Hamann's detachment and their local collaborators, but by the Component of Einsatzkommando 3 in Wilna, first mentioned on page 5) were corrected.
Posted by Roberto Muehlenkamp at Sunday, August 26, 2012