On fakes, misunderstandings and sensationalist headlines.

Update 11.01.20: thankfully, The Tablet has fixed this, the article was renamed to "Did a Supposedly Nazi Document Fool the Experts?".

A few days ago Tablet published an article by Mel Laytner entitled "How a Fake Nazi Document Fooled the Experts".

The article itself is a good piece of research. Laytner points out that many publications and exhibitions have used an alleged document in which the Nazis supposedly calculated the "profitability" of the averge inmate including the allowance for the costs of cremation and the use of ashes and bones. From the information gathered by Laytner it becomes clear that claims about the alleged document are based on the data published by the survivor and historian Eugen Kogon in 1946 and then republished by Reimund Schnabel in the book Macht ohne Moral and then mistaken by various authors as an actual document.

Unfortunately, the title of the article, chosen not by the author but rather by a Tablet editor (acc. to a personal communication from Mel Laytner) is absolutely misleading. There is no actual document involved, so there was no "fake Nazi document" to speak of, nobody forged an actual document in this case.

Let's look deeper into the issue of the alleged document. In the book Der SS-Staat Kogon presents the information in question as follows (translated version quoted from The Theory and Practice of Hell, Berkley Books, 1998, pp. 301-2):


No super Jew of Streicher's ever accomplished what SS Lieutenant-General Pohl managed to do-putting the mass utilization of human bodies on an efficiency basis. During his lifetime each concentration-camp slave, obtained without capital investment, represented the following profit value when fully "utilized" from a financial aspect:

Daily farming-out wage, 6 to 8 marks, average 6.00
Minus: 1. Food 0.60
2. Clothing Depreciation 0.10 0.70
5.30
Multiplied by 270 (average life span of nine months) 1,431 marks
Efficient utilization of the prisoner's body at the end of nine months increased this profit by the return from:
(1) Dental gold
(2) Personally owned clothing (part of which was used in other camps, reducing expenses for new clothing, while part was utilized in respinning for army uniforms)
(3) Valuables left by the deceased
(4) Money left by the deceased
(Down to the early war years, money and valuables were returned only to the families of the minority of prisoners who were German citizens)
From these returns must be deducted an average cremation cost of two marks per prisoner, but the direct and indirect profit per body averaged at least 200 marks
In many cases it ran to many thousands of marks
The total profit per prisoner, at an average turnover rate of nine months, therefore ran to at least 1,630 marks
Here and there a concentration camp obtained additional revenue from the utilization of bones and ashes

Let it not be thought that this calculation is my own handiwork. It comes from SS sources, and Pohl jealously guarded against "outside interference." The SS Main Economic and Administrative Office forever sent out inspectors to counter small- or large-scale competition, such as the German police in the east tried to establish in the form of "labor camps," "police detention camps," and the like.

It is obvious that this calculation is not presented by Kogon as any sort of a document. It is clear already from the language (decidedly informal and in past tense; not presented as a document citation either). It is Kogon's own text. Now, he claims that the calculation was created by the SS ("sie ist von SS-Seite aufgestellt worden"). This means he claims the SS as his own source.

We can practically exclude that he had a direct access to some sort of high-level WVHA stats. But Kogon himself was a privileged prisoner in Buchenwald, he was a valued assistant (a secretary) to the infamous Nazi doctor Erwin Ding-Schuler who conducted human experiments in Buchenwald. Kogon may have discussed the data similar to that published in his book with Ding-Schuler and other SS doctors, who could have made some speculative remarks, they may have even made a similar informal calculation just for fun. This would then be Kogon's probable SS source. (It should be added that we also cannot entirely exclude that Kogon partially invented the data. Some scholars suspect him of tampering with other evidence, cf. P. Weindling, Epidemics and Genocide in Eastern Europe, 1890-1945, 2000, p. 354, incl. fn143).

In any case, without being able to verify the exact source of Kogon's data and the veracity of the transmission of the information by him the numbers are entirely useless. It certainly cannot be established from Kogon's uncorroborated and unsourced claim what the SS officially thought on the matter. This might have remained a probably speculative, and thus ignorable, claim by a historian if not for Raimund Schnabel's 1957 document collection Macht ohne Moral, which printed Kogon's numbers without specifying the source on p. 203 (Kogon's book is only mentioned in the general literature list). 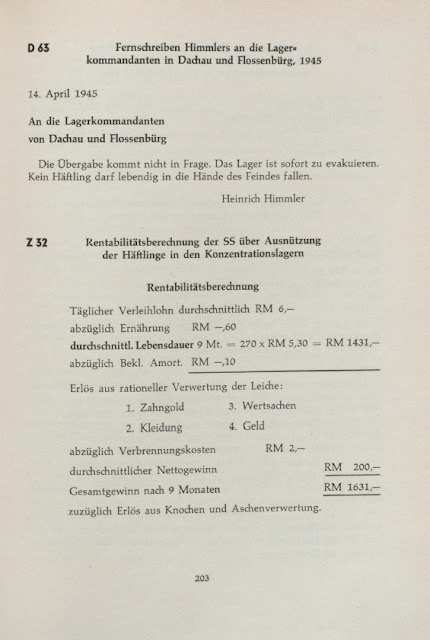 As Laytner points out, Schnabel clearly marked this as a citation (even if he didn't specify where this citation comes from), and not a document, by using the letter "Z" (Zitat) instead of "D" (Dokument). It is also clear that it's not even a literal citation from Kogon but merely a short, dry, reformulated and partially confused (note the wrong line order) summary of Kogon's data. E. g. "here and there a concentration camp obtained additional revenue from the utilization of bones and ashes" becomes "additionally, the proceeds from the utilization of bones and ashes".

What happened next is painfully clear - a hapless author, or several, misunderstood this as Schnabel quoting an actual Nazi document. Then other authors quoted the first ones. And so on, and on, and on... (Someone apparently even made a copy of this page, which copy was then misunderstood by someone else as a copy of an original document.) We've seen this before.

Clearly, we see a scholarly failure here. Laziness, overreliance on secondary sources, what have you. (That's why here, at this blog, we try to publish as many original key documents as possible.)

But none of this requires an explanation of fakery. Hanlon's razor: this is a big, dumb mistake, a misunderstanding. No fake document actually existed, there was no document at all in the first place.

Laytner writes in the article:


The episode provides a cautionary lesson in how a dramatic document of problematic provenance insinuated itself into the conventional wisdom about the Holocaust - and may have inadvertently provided ammunition to deniers.

But an accusation of scholarly laziness arguably pales, ammunition-wise, in comparison with a false accusation of fakery which the Tablet editors (though not Laytner) have now made, handing the actual ammunition to the low-brow chan/Twitter/etc. online hordes who are usually content to post screenshots of sensationalist headlines as quick visual "gotchas". And they are not wasting any time. 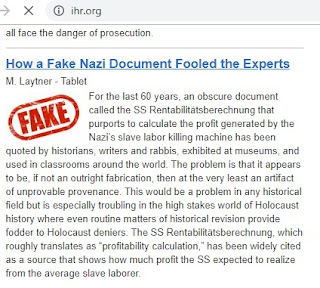 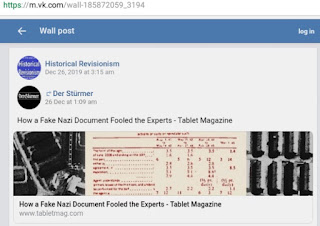 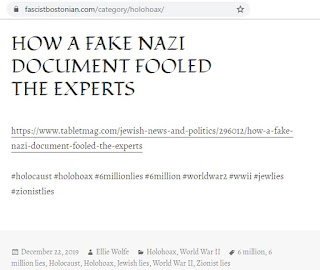 So this is darkly ironic. Tablet should rectify the situation.
Posted by Sergey Romanov at Friday, December 27, 2019